If you’ve ever lost yourself in a vintage western-style RPG, you’ll be right at home with Atlus’ upcoming DS title. We will warn you that you may have forgotten how hard these games were, though.

Bring it on, you say?

We’ll start off by saying that this little gem may not be for everybody. It’s not the typical Japanese product you’d normally expect from Atlus. Those expecting a cute, happy RPG will surely be disappointed. Despite coming from Japanese developer Success, there’s nothing else Japanese about this game. You’ll know that from the moment you meet your Guildmaster and create your party.

So what does The Dark Spire look like? It depends on what mode you set it in. By default, you’ll be looking at dark, stylized character art and corridors mapped with cool textures. In the “classic” mode, you’ll be walking through white wireframed corridors. Either way, it’s corridors, and anyone who has played and enjoyed those classic PC RPGs will be thrilled. 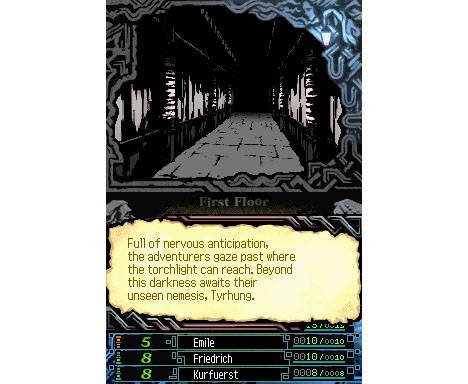 You and your newly-created party are to make it to the top of a huge tower, where a stolen item awaits your retrieval.  Yes, it’s one long item quest, but a story does slowly unfold as you make your way up this tower, and it unfolds through fantastic dialogue that will take you back to the old days.

But don’t think you’ll just be walking stairs and swatting slimes; this tower is massive dungeon where death is the norm. In your journey, you’ll traverse a 3D maze, going from corridor to door, doing your best to stay alive. Expect random encounters with beasts that are just as strong as you, if not stronger. You’ll die often. A single random beast on the first level can knock down your whole party. Be ready for that. We can’t stress this enough: you will die often.

We find it pretty refreshing that you can’t just march through a dungeon at your leisure in The Dark Spire. We love that our created party member starts out with two hit points. Sure, we’ll become annoyed after having died in the same place several times, but it comes with the territory. And so does level grinding and strict item management. 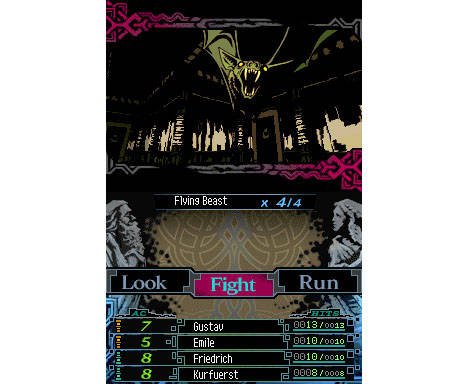 But that all makes victory that much more rewarding, right? Sure, everyone isn’t going to see it that way, but we think the hardcore set will. Assigning stats, learning skills, disarming traps and picking locks? Hell yeah. It’s been awhile. The Dark Spire is a thrill for anyone who remembers doing these things in games where game play was the focus.

Look forward to our full review of The Dark Spire in March, right around the March 10th release date.