D3 Publisher is a company full of sin. They’ve been promoting lust with all of the Onechanbara stuff and now they’re promoting greed with Texas Cheat ‘Em. It’s bad enough that Texas Hold ‘Em promotes gambling, but now you’re going to be gambling AND cheating to win. You’re all going to Hell!Texas Cheat ‘Em

is exactly what it sounds like. It’s Texas Hold ‘Em, but you can cheat your way to victory. Hit the jump to see if it will be worth placing a bet on Texas Cheat ‘Em.

Players will have at their disposal 15 different types of cheats that they can use on themselves, a certain player, or against everyone at the table. Cheats will allow you to see other players cards, steal their chips, change a card to something else and to much more.

To use a cheat, you’ll have to first win a mini-game. When you activate a cheat, a little window comes up with the mini-game. When the cheat isn’t targeting anyone directly, it will be a mini-game of chance, such as stopping a spinning wheel at the right spot. If the cheat is directly targeting someone, the target will be able to fight the cheat through the mini-game. It can be a simple game of Roshambo or a horse race button masher. The pictures in the gallery below will show you more of the various mini-games. 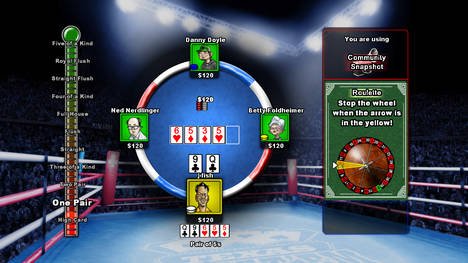 Each cheat has points attributed to it. Some cheats cost 5 points to use and some will cost up to 20 points. Players will start off with 15 points and earn 15 more points with every phase, up to a maximum of 45.

Up to eight-players can go at it on the PS3 and 360 and there will be Avatar support for the Xbox 360. There won’t be any EyeToy or Vision support, however.

No price has been announced yet, but hopefully it will be around the $8 mark. Anything more and I wouldn’t want to suggest this to anyone. The game is fun, but I can see the cheating novelty wearing off fast. I think most people that would want to play a card gambling videogame would do it so they can get better at the game in real life. You need all the practice you can get before putting up your wedding ring and/or car on the line.

Texas Cheat ‘Em is developed by Wideload Shorts and published by D3Publisher. It will be out this Spring for XBLA, PSN and PC.