Some of the details of Splatterhouse‘s first entry into the current gen have been going around for a couple of years. Now we’ve finally had a chance to see the actual game in action at a Pre-E3 event Namco Bandai hosted last week.

If you haven’t heard, Splatterhouse has been revived, now on the Xbox 360 and PS3 as a 3D Beat ‘Em Up, complete with all the pools of blood and bits of gore you’d expect if you ever played the three original games and daydreamed of what it would look like in the future. And if you never did? No worries, as the new Splatterhouse includes unlockable versions of the original Japanese arcade version of the first game as well as the second and third versions that came out on the Sega Genesis.

As cool as these vintage unlockables are, I think you’re going to like 3D Rick much more than the 2D ones.

Rick is a young weakling until he encounters a possessed talking mask when he first enters the mysterious West Mansion. This weakling would not be able to retrieve his nabbed girlfriend from the crazy occult-obsessed Dr. West without this Terror Mask’s help, so Rick puts it on, lets it attach to his face, and accepts its power. He then grows from a weakling to a monster, which is exactly what he’ll need to be to make it through Dr. West’s mansion, which has been overtaken by hell itself.

It’s a simple story that doesn’t get in the way of the action, but more importantly it makes ample room for gore. And Splatterhouse is packed with gore. Hell, even the menu screen features flying bloody, meaty chunks of…something floating in the background behind your game options. 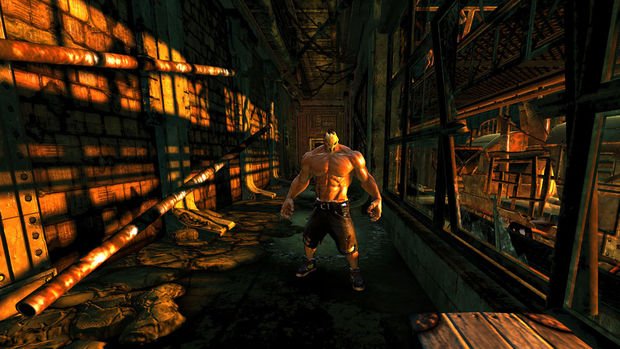 The game itself is a 3D Beat ‘Em Up that focuses around the act of violent bloodletting to acquire more power. This means that Rick is actually out to splash as much blood as possible to make his way through the West Mansion. Blood counts as a experience, measured in spilled blood volume. You’ll be able to spend that experience on more moves and powers as the game progresses. Kills fill your “blood bar,” a source of power that will let you do “Splatter Kills,” which are fantastic blood explosions that are enemy specific, and usually controlled by the analog sticks. A Splatter Kill lets sprays a ridiculous amount of blood in motions that involve head bashing and neck ripping, giving you even more power to kill these hellish monsters later on when they get bigger and meaner. Of course, there’s also plenty of blood-letting toys to play with, like chainsaws, bats, axes, cleavers and many more. Again, we’ll stress that there is a lot of blood in this game.

You’ll make your way through the mansion room by room, taking out some really nasty looking monsters in order to clear the room and make your way to the next. Advancing from room to room requires anything from taking out all of the enemies (including boss battles) to clearing simple puzzles. The latter had you doing things like placing enemy heads on spikes to unlock doors, or killing a certain number of sacrifices. Occasionally some simple platforming elements were thrown in. One I saw had Rick moving across a crumbling bridge by jumping to safe hot spots. Nothing special here, but it does break up the bloodletting action a bit. 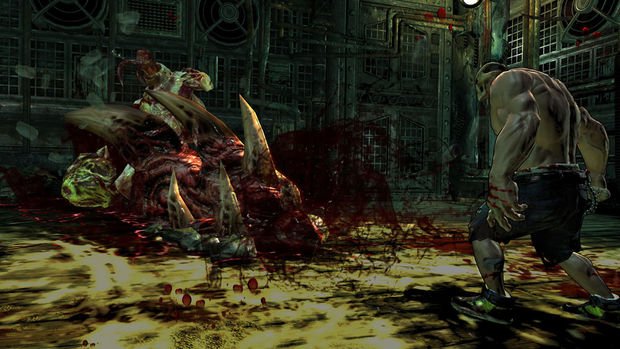 The gradual progression I saw had Rick moving lower into the West Mansion, working his way down to catacombs under the building, presumably continuing on to hell. And, as you could guess, these were some messed up catacombs. It seems that Dr. West’s toying with the occult has turned the mansion into a sort of hell portal that is becoming increasingly organic. I saw a huge, writhing baby-beast fall from the ceiling. It pulsed with slime and begged to be slaughtered. Later, a huge, wall-sized eyeball blocked the path. Rick had to beat the eyeball in until it was weak enough to be pulled form its socket. And then, in fitting style, Rick entered the bleeding eyesocket to proceed into the next room.

Splatterhouse looks to be shaping up to be a stylistic remake of the classic series. This could easily have been really generic, but there’s a nice bit of style to go along with the tons of gore. It’s one of those remakes that you want to be good, and I feel like this one is going to be pretty good. Just know going in that there’s nothing smart about the new Splatterhouse. It’s all mindless, bloody fun.

Look for Splatterhouse to be released this fall for the PS3 and Xbox 360.