Summary time! Jason Rohrer’s Sleep is Death is a multiplayer storytelling game. A Controller creates and modifies a world that the Player interacts with.

I documented the Player experience in an earlier preview. It was a great deal of fun, but why wouldn’t it be? I was playing a story authored and controlled by Jason Rohrer, the dude who created the game. Any game is fun when you’re playing it with the person who created it.

With that in mind, I tested the game with two different people: Ashly Burch (my sister, and star of Hey Ash Whatcha Playin’), and Ashley Davis (my girlfriend, and star of Once Upon A Pixel).

Hit the jump to see how it went. 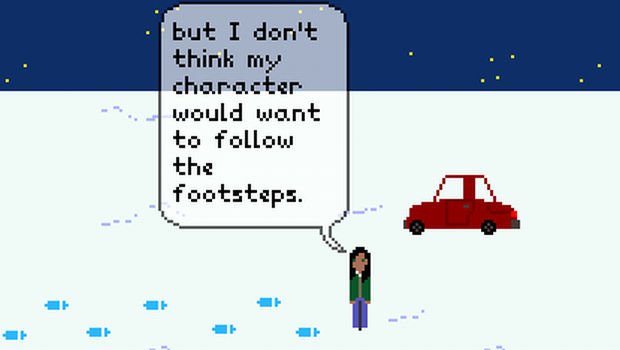 I’ll get into specifics in a minute. For now, let me just say: as much as I enjoyed playing Sleep is Death as a player in Jason Rohrer’s story, I enjoyed it even more as a Controller.

Part of that may be the weird sense of power I felt — look, ye mortals, and despair at my ability to conjure a snack cart out of thin air — or the fact that I was playing with people I loved. Whatever the reason, I didn’t need Jason Rohrer hovering over my virtual shoulder in order for me to enjoy the stories I controlled.

Well, maybe “controlled” isn’t the right word. Though the Controller is in charge of all the scenery changes, object movements, and art modifications, it’s not as if the Controller can (or should, at least) completely dictate a linear story that the Player dumbly suffers through. I tested the same basic starting story with both Ashly Burch and Ashley Davis (hereafter referred to as “Ash” and “Davis,” for simplicity’s sake), but I ended up with two completely different tales.

I wanted to create a story frame that accomplished two things. Firstly, it had to be personally meaningful to myself, Ash, and Davis. Secondly, the frame had to give me an opportunity to create my own art, in order to test out SiD‘s sprite editor.

It was for these reasons that I created a scene based entirely around Doctor Who — specifically, the Tenth Doctor’s regeneration.* I planned to trick the player into thinking I’d created a pathetic Doctor Who fanfic where they’d hang out with the Doctor and watch him regenerate, only to suddenly switch things up and reveal that they’d simply been a fangirl who had won a contest and been given the opportunity to shoot a scene with the Doctor Who production crew. As I’d imagined it, this story would have combined fantastical, nerdy silliness with a depressing, down-to-earth twist.

I was totally, mindblowingly wrong about where my stories would end up. 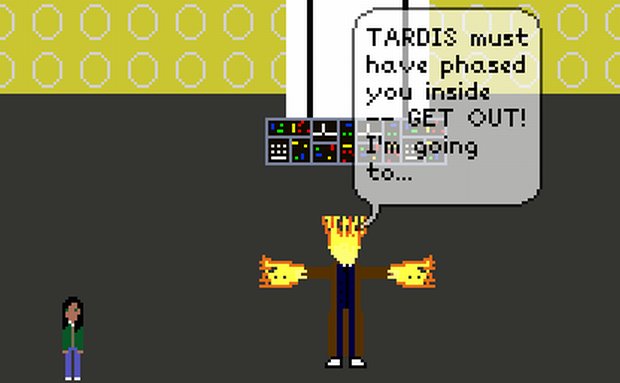 You can download both stories from here. Davis’ story is entitled, “Davis vs Doctor,” and Ash’s is, “Guest Starring Ashly Burch.” I’m not going to bother summarizing what happened in either story, so I’d highly recommend downloading and reading them for yourself before going any further.

I’m not sure why the game is called Sleep is Death, but it could just as easily be called “Best Laid Plans.” I tried to imagine every direction the story could possibly go, but surprisingly, wonderfully, I could have never predicted where Ash and Davis would take my relatively bare-bones plot.

Before I get into the nuts-and-bolts of the Controller interface, it’s just worth mentioning that all the great stuff about the Player interface — the sense of improvisation, of give-and-take, of safety and freedom — is all present in the Controller experience. Unless you’re a dick who refuses to allow the player to do anything they want, the Controller mode still results in wonderfully unexpected little moments of intimate brilliance. I could have never expected Davis would want to jump her car over the dying Doctor, but I knew that, once she had, she absolutely needed to make that same jump over an exploding TARDIS. It simply had to happen, and we both laughed our asses off when it did.

Similarly, I couldn’t have planned that Ash’s final words of her story would be an incomplete attempt to type “regenerate.” There was something oddly poignant about the character she’d created; a girl with such an inability to distinguish fantasy from reality that in her final, dying moments, she was unable to do the very thing that her hero was known for.

Of course, Ash then fucked around some more by writing her little Porky Pig-esque coda, but even that felt hilariously appropriate. 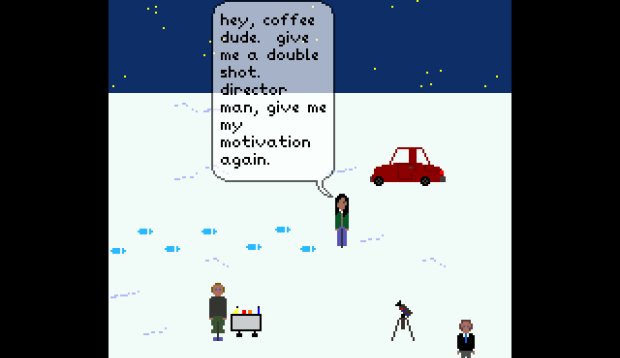 So, yes: in terms of personal interaction and story creation, Sleep is Death is just as fun from the Controller interface, without Rohrer’s presence.

The Controller interface itself is surprisingly intuitive. Pretty much everything is mouse-based, and, after viewing a short tutorial video by Rohrer, I was ready to start making stories by adding or removing objects, switching between scenes, and quickly editing sprites.

I had to spend about an hour or two preparing my story before my Player even connected. Since I knew I only had thirty seconds to react to the player’s actions, I wanted to have as much stuff completed beforehand as possible. Even though I couldn’t have predicted where the stories would ultimately end up, the preparation paid off: if I needed to add a regenerating Doctor or a snack cart in the middle of a story, I only needed to drag and drop them from the archive of premade objects. Simple.

Every time you play Sleep is Death with anyone, all the sprites they used will go into your personal, searchable sprite database. Thanks to this automatic archiving, most of the sprites I used were actually modified versions of sprites Jason Rohrer had already created: the “Ash” sprite you see in both stories, for instance, is just a female sprite Rohrer made with the hair dyed black instead of brown. At the end of Ash’s story, the cops from my and Jason’s tale showed up and menaced her with guns.

Even if I needed to create something I hadn’t made beforehand, like the exploding TARDIS in Davis’ story, I could easily form new objects thanks to the game’s paper doll-esque sprite system.

Basically, every object is made up of many smaller sprites. Even though the Tenth Doctor looks like a cohesive image everytime you see him, he’s actually made of several smaller parts: a head, a torso, and legs. There’s no way to simply create one, large sprite of his entire body. At first, this irritated me: I couldn’t find an easy way to compare the different body part sizes, so I had to keep tweaking the legs and rechecking how they looked in relation to his torso, then tweaking again, and so on.

Once I started to modify the object, however, I understood the need for the sprite separation. If I wanted to change something small about the Tenth Doctor’s sprite — like, say, making him stretch out his arms — I didn’t need to create an entirely new Doctor sprite from scratch. I simply grabbed a single arm object, rotated it, and copied it twice before attaching the new arms to his torso. Though it took me a good half-hour to get the first Doctor sprite just right, all further modifications took less than a minute each.

This meant that when it came time to animate Ash killing herself in her story, all I had to do was flip the gun sprite 180 degrees, then copy and paste some blood splotches onto her head. Simple, quick, and satisfying.

Of course, that doesn’t mean I never got overwhelmed, or that I never made any mistakes. I screwed up more than a few times in the course of telling both stories, but hey — no big deal. The stories weren’t ruined. We moved on. If I end up cloning a car or two in exchange for experiencing that wonderful sense of panic that Sleep is Death induces so effectively, that’s fine. I’m more than willing to make that sacrifice.

In the end, the Controller interface is pretty much everything I wanted it to be, and I don’t just mean from a technical standpoint. Yeah, it’s intuitive, and allows for lots of creativity, and that’s great, but that’s not what is truly surprising about the Controller interface. The Controller interface, even more so than the player interface, highlights the collaborative and improvisational aspects of a Sleep is Death play session. While I Controlled those two stories, I was constantly making quick, profound choices about my relationship to the Player, and to my own abilities as a Controller.

Davis wanted to make her car flip over — could I do that? Should I do that? Sure, I thought. It’d be hard, but it’d be worth it. Later on, though, Davis also wanted to ram the TARDIS with her car. I decided not to let her do that, because I thought it’d be more fun to flip her car over an explosion. The Controller engages in a constant, intense back-and-forth with the player where nothing is certain and, if the Controller is willing, damn near anything can happen. 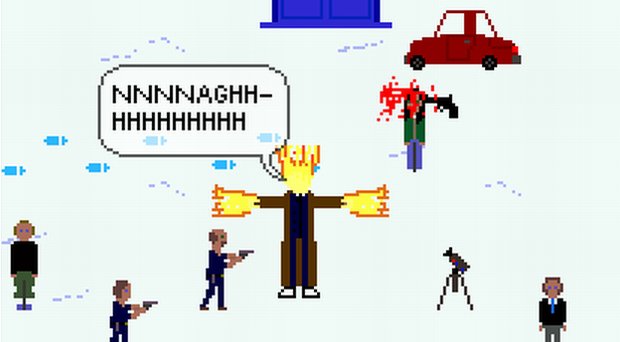 In fact, I was really worried that I simply wouldn’t know what to create in Sleep is Death. When it comes to user-generated content, I’m not a particularly creative guy: my Spore creatures were all boring, and I never made a full LittleBigPlanet level in the entire time I had it. Sleep is Death, however, elicits a totally different type of creativity; you don’t have to be a level design genius or a creative mastermind to get something useful out of a story, because you’ll always have someone else to react off. I didn’t have to worry about creating an objectively awesome series of levels or situations when I had people like Ashley Davis deciding to turn my story into a stunt spectacular. Even though my “you’re a guest star on a TV show” plot was kind of dull, Ashly Burch’s involvement turned it into something spectacularly funny, and cool, and personal.

I would have never, ever expected that Ash’s playthrough of my story would end with her dying and the Tenth Doctor regenerating at the exact same time, but that’s exactly what did happen.

*If you don’t watch Doctor Who, just know that the Doctor is a character who, when dying, will completely change his appearance and personality in order to save himself. Ash and I both cried like little bitches when the most recent Doctor regenerated.