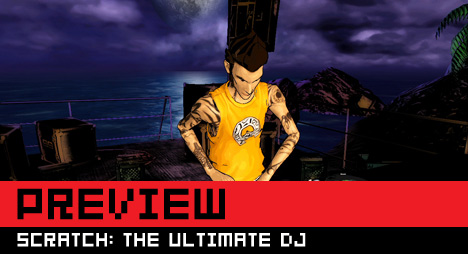 Beyond all genres, rhythm/music games are by far my favorite. I’ve rocked rock games, danced and waved my arms to dance games, and button tapped the button-tapping games. Hell, I even own Mad Maestro — that’s how much I dig games with a musical slant.

However, there’s one musical genre that’s been missing in all this: hip-hop. Other than karaoke games, hip-hop, R&B and rap have largely been forgotten by the Harmonixes, Konamis and Activisions of the world. It’s pretty pitiful that the music that dominates MTV and Top 40 stations hasn’t had a game to represent it. So when I heard about Scratch: The Ultimate DJ, I was initially skeptical, but interested to see what developer 7 Studios had to offer.

After sitting down and seeing the game played, I’d have to say I’m no longer skeptical. As a matter of fact, from what I’ve seen, Scratch: The Ultimate DJ is now one of my most anticipated game of 2009. If 7 Studios can follow through on what they promise, Scratch: The Ultimate DJ could be the next big music game for all gamers, not just those missing out on something with a hip-hop flavor.

Hit the jump for my impressions of Scratch: The Ultimate DJ.

When you first sit down to the Scratch: The Ultimate DJ, the first thing you’d probably notice is the controller. While the controller I saw was a DIY plastic beast, the general layout was there, and the promised controller is going to be much sleeker and nicer. And on a positive note, 7 Studios (with publisher Genius Productions) have said that the game bundle with the controller will be priced comparably to standard guitar bundles. Expect to be paying less than 90 bucks.

From the left of the controller, you’ll first see the turntable. In the build I saw, this table is the exact same CD-turntable made by Numark that professionals use. It’s just the right size for the controller, and looks to be very smooth. Numark is also designing the final controller, so expect everything to be pretty legit.

To the right of the turntable are five square buttons, which work just as you’d expect. What Scratch: The Ultimate DJ has you do is tap out the note chart of the most interesting parts of a song (so the game might change from bass, to drums, to synth, to bass again), but the actual execution of button tapping is exactly how you would tap them out in any other rhythm game. However, the game encourages you to tap out rhythms independent of the falling gems, which is pretty neat and something I’ll address later. Finally, on the far right is a cross-fader, which acts much like a whammy bar in a guitar game. 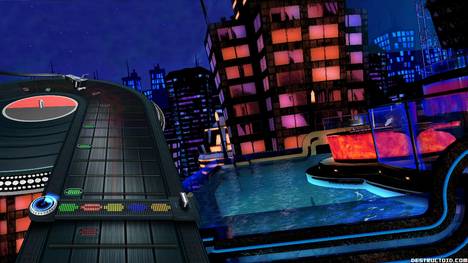 Other than tapping out gems, there are scratching blocks in the song, which act much like the “Star Power” opportunities in Guitar Hero. This is where the turntable comes into play. Players bust out official “tricks” — legit rhythmic patterns that real DJs use — and they can then combo these for higher points, as well as build up for a solo overdrive mode. This solo mode gives you a longer block of time to turn out tricks. Combined with all the other modes of personalization, Scratch lends a truly individual flavor to a song. It looks and sounds freaking awesome.

It’s with the scratching that the game only begins to be so much more than “Guitar Hero for hip-hop.” Unlike that game, Scratch: The Ultimate DJ encourages players to tap out those independent rhythms separate from the set gem pattern, bust out random freestyle scratchings, and twiddle the cross fader anytime you want. The game never cuts out on players if they are doing poorly, and the general attitude is that of reward and creativity, not failure.

Possibly the coolest feature of the customization is the ability to assign sounds samples, or “Battle Records,” to the different buttons, and the ability to record layers you have made over a song. Coming with the game are 50 or so “Battle Records” that can be assigned to the five buttons; with a USB microphone you can record more to play with. I was told by Dan Lehrich, creator and creative lead on Scratch: The Ultimate DJ, that the first thing the dev team did when this feature was finished was to record burps and farts to play over a song, such as “Feel Good Inc.” by Gorillaz. So at least we know the possibilities are endless. 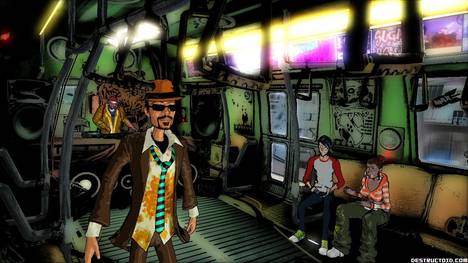 Beyond the single-player mode, there are some neat-sounding multiplayer modes to make this a proper party game. With online and off, people can go into a head-to-head score battle mode, or they can enter a rather cool sounding “question and answer” mode. In this mode, (based upon the real-life DJ skills of Mix Master Mike) players bust out scratch tricks on the turntable. You buddy is expected to follow with their own combo, and throw it right back. It sounds like a rhythm game version of HORSE, and could be a lot of fun to play. And just for giggles, Scratch: The Ultimate DJ lets you plug in a USB microphone that lets people rap along or MC while the player DJs.

I really must say it — although Scratch: The Ultimate DJ sounds like a fairly typical peripheral-based music game, it promises to be so much more. Beyond the basic gameplay elements, it explodes with personal freestylings that make this game more than a knock-off of Beatmania or Guitar Hero. Instead of playing a song really well, players will be able to play their own versions of the song really well. 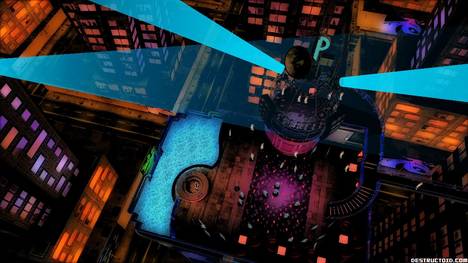 And with a solid set list of 60 songs, all original recordings, and even re-recordings by certain artists, and with performers like Gorillaz, Kanye West, Run-D.M.C., Beastie Boys, Black Eyed Peas, Tech N9ne, Nelly, Deltron 3030, and Eric B. and Rakim, there’s a huge gamut of hip-hop stylings. Expect downloadable content in the future to round out any hits 7 Studios might not get into the shipped game.

Although a finalized controller doesn’t exist and the visuals aren’t yet polished, there’s quite a bit of potential for Scratch. For anybody who loves music games, shows the slightest interest in contemporary hip-hop, or just wants a game where the player expands upon the music (as opposed to just reenacting a musical track) keep an eye out for Scratch: The Ultimate DJ. I certainly am.

Scratch: The Ultimate DJ is expected late Summer 2009 for the PlayStation 3 and Xbox 360.