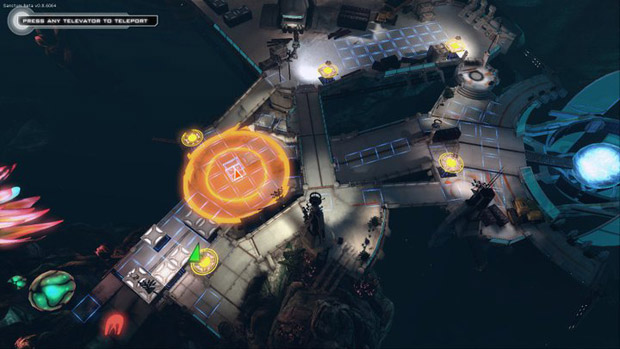 Let’s get this out of the way first: Sanctum has no relation to the quite terrible 3D movie that hit theaters earlier this year. In fact, it is a quite good first person shooter variant of the tower defense genre, built in Unreal Engine 3 by Swedish indie developer Coffee Stain Studios.

I spent some time with Sanctum — alone and cooperatively with Jonathan Ross — in the beta that is currently available on Steam if you pre-order the game. And while both of us have played our share of tower defense games to the point where it’s easy to get tired of it, Sanctum provides a nice enough twist on the genre to make it worth checking out. 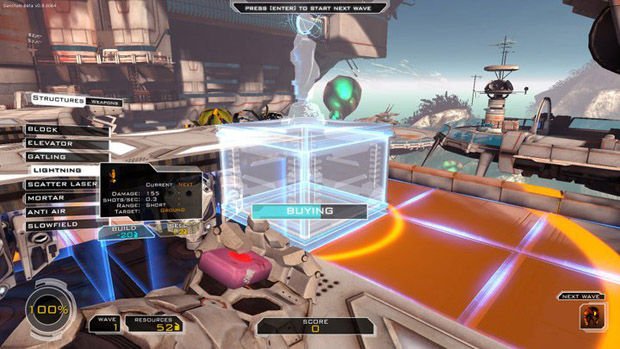 To really understand what playing Sanctum feels like, you first have to wrap your head around how this game does tower defense. As usual for some titles in the genre, there is a grid-like field between a Core you have to protect and a number of “entrances” that enemies will spawn from. On this grid you build ‘blocks’ to build your maze, and on these blocks you build your tower-turrets.

The first thing we did when we jumped into co-op was to make a standard “Z-type” meandering maze: building a walls of blocks with alternating horizontal rows of free space to create a long path for enemies and stall them for as long as possible while a few turrets fired on them. This turned out to be a disaster; we had to rethink our strategy.

You see, Sanctum‘s “towers” can be built inside and on top of the blocks you build. Low damage Gatling guns are positioned inside a block and will shoot at anything in range that passes them. Other towers like Mortar, Anti-Air, and Lightning towers are built on top of blocks. However, towers will not shoot through blocks because this is a 3D environment. So you have to keep that in mind while experimenting with what kind of tower works best in what kind of location, in with what kind of maze design. 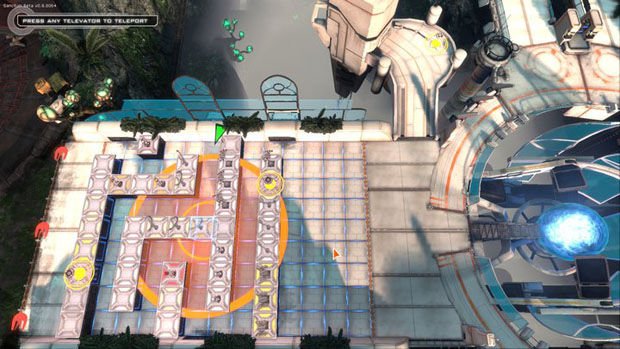 After two rounds, we got the hang of the basics of the game and built a 90-degree rotated version of our maze, focusing on creating vertical lanes of fire while still making the enemies’ path as lengthy as possible. This already worked a lot better, most of all because it just kind of ‘clicked’ with how we tended to play in first person.

The FPS element is what makes Sanctum stand out in a crowded genre, and it works on multiple levels. First of all, you actually build the blocks and towers in first person, highlighting a square of the grid you’re standing next to and building whatever you want on top of it. This works just like you’d expect it to, and it works well. The game automatically selects the right tower if you highlight an existing tower you want to upgrade, which is a very useful feature.

Secondly, you are no longer a passive observer at the mercy of your tower-maze design, but have access to different types of upgradable weapons to shoot enemies with directly (three weapons in the beta). A standard assault rifle with an alternate-fire grenade serves as your “hold it down and pray for the best” solution. A sniper rifle can be zoomed in with two levels of zoom and does high amounts of damage to single targets, but is very slow to reload. Finally, a freeze gun lets you slow down and freeze groups of enemies. 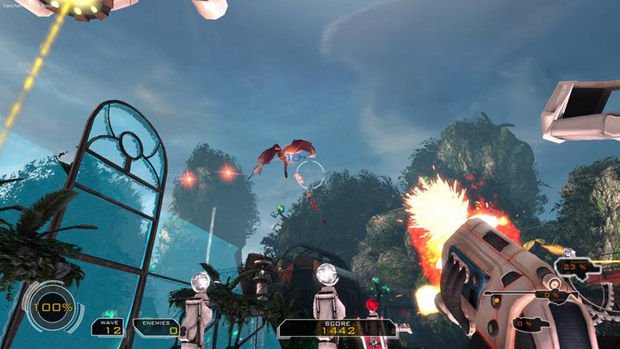 The weapons allow you to snipe the first enemies as they appear in a wave, or freeze dangerous groups of enemies to stall them in your maze. Being able to shoot yourself makes the game feel much more engaging than just having to rely on your towers. And you will have to shoot a lot, as the game has a ‘build phase’ and a ‘wave phase’ — meaning you can’t build new towers after you give the ‘ready’ command and the wave starts.

Towers can be upgraded like you would expect, but so can weapons. A level 2 sniper rifle will shoot two shots instead of one before you have to reload, for instance. Every weapon also has a cooldown, so you can’t just keep holding down the mouse button while spraying in the heat of combat. Alternate fire drastically ups the percentage indicating weapon cooldown, making it a tactical choice rather than a combat solution you can spam. Because you can reload and cooldown your weapons while switching to others, you will find yourself effortlessly switching between weapons for maximum efficiency.

Blocks can also be upgraded with a ‘Televator’ — an elevator you can teleport to from an overhead map that you conjure by pressing Tab — which lets you rain down fire on enemies from the top of the maze. 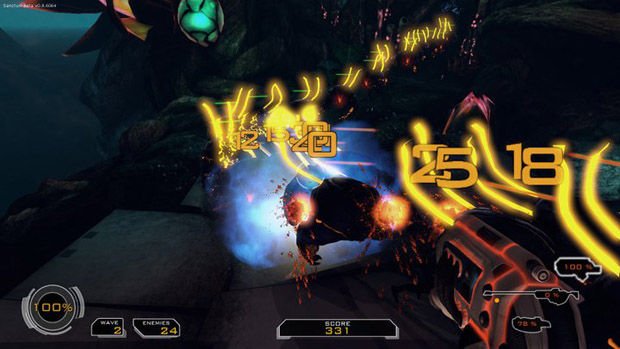 While messing around in the first few rounds, we started out sniping enemies near their spawn points to see how fast they went down. Some enemies only receive damage on their weak spots, highlighted by red/orange blobs (think Lost Planet bosses), which sometimes can only be shot from behind. A handy encyclopedia details all the enemies, their strengths and weak spots, and your towers.

After the first wave entered our maze, we ran on top of our maze using the Televators to snipe enemies for high damage, and switched to the freezing and rapid fire weapons while our sniper rifles were cooling down. In the meantime, our towers were assaulting enemies on the ground and in the air. It took a couple of runs to properly get the hang of it, but it felt like it would be accessible enough to become increasingly good at the game in no time.

We made it to wave 9 in co-op after three rounds, but when I went back to run the tutorial and play singleplayer later on, I made it to the last wave (wave 25) with relative ease on Normal difficulty. This still took a little over an hour, so it looks like the full version will have plenty of playtime for your money if you factor in different maze designs and co-op. 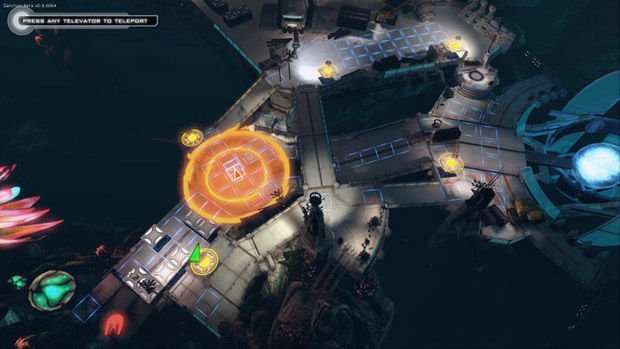 Because my current PC only just goes over the system requirements Steam recommends (Core 2 Duo 2.0GHz, 2GB ram, mid-range graphics card), it struggled a lot with the Unreal graphics on my monitor’s native 1920×1200 resolution, even with all details on very low or turned off. However, turning down the resolution to 1650×1080 while setting all details to max fixed the frame rate for me unless there was a lot of action going on — and it still looked great, just a bit less sharp.

Jonathan’s specs were mostly similar to mine, but thanks to his GTX 260 graphics card he was able to run the game fluidly on 1920×1200. So if you like your bigger monitor resolutions and high detail, you might want to make sure your hardware can deal with the fill rate.

While the game looks great and colorful thanks to the Unreal Engine, the controls are just as polished. Scroll through towers using the mousewheel or by hitting the Q and E buttons, or swap between towers and weapon upgrades by pressing 1 and 2. The FPS controls are tight and most of all it’s just the little things, like the sniper rifle being mostly pinpoint accurate even without zooming in, that show that Coffee Stain Studios has spent plenty of time on polishing this game. 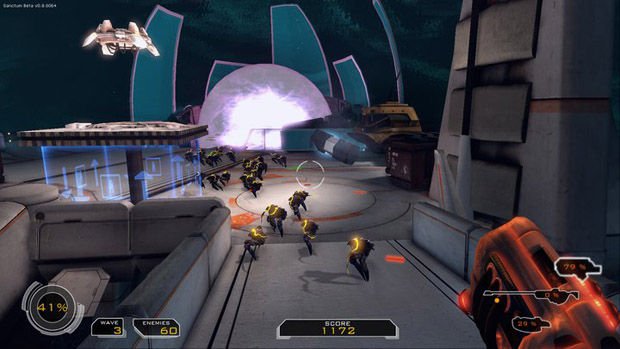 There was some minor lag because I played from Europe with someone from the West Coast, but nothing that was detrimental to the gameplay. A fun little detail is that whenever you chat, the game will speak your lines out with a computerized voice; it was fun to mess around with it and see how it would pronounce certain words.

Although we only had access to one map with four difficulty settings, Sanctum is already a blast to play in the beta. You have to experiment a bit with your maze layout, but that’s a given for any tower defense game. The FPS mechanic works great, and it gives you a more hands-on feel to a genre that tends to lack it. And although you can definitely have fun playing it solo, the game feels like it’s meant for co-op play. In fact, while the game seems to offer plenty of content in the full version, you should really find a co-op buddy if you’re planning on getting the most out of it.

The game’s Steam community forums also show that Coffee Stain Studios is very receptive to feedback, with a lot of people — including a few Dtoiders — clamoring for things like 3 player co-op and top-down build modes. Sanctum is the kind of game that could have a long live with future updates, so it’s promising to see the developer interact with its community the way they do.

If you don’t want to pre-order it to get a chance to try out the beta, check out the game’s Facebook page as they sometimes leave some beta keys on there. Just don’t be one of those guys and beg for one, please.