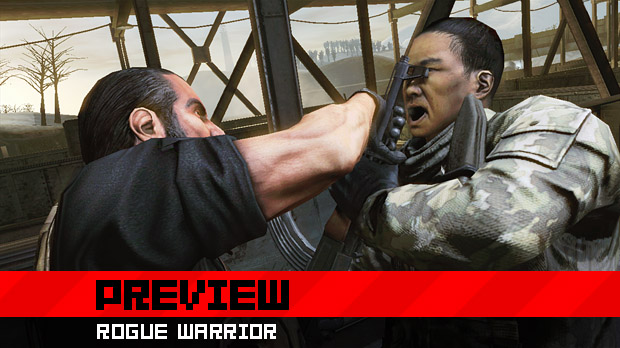 These days, it seems like action and shooter genre games tend to star a generic hero or lead. They’re just faces and names, with some kind of special ability, power, or training. It seems that they begin to blur into one another, with one gun-toting brute looking like another. There has to be some kind of real hero out there that can take the role of lead in this type of game, right?

How about Richard “Demo Dick” Marcinko? He’s a former United States Navy SEAL, the creator of SEAL Team Six and the Red Cell, the recipient of countless military awards for his service, author, American hero, and just a general all-around badass. I mean, this guy broke onto Air Force One without anyone knowing. Why not make a game starring him?

Developer Rebellion and publisher Bethesda Softworks have done just with with Rogue Warrior, a first-person shooter set to arrive on the Xbox 360, PS3, and Windows PC in the fall of 2009.

Rogue Warrior drops you, as Demo Dick, right into the action in North Korea back in the Cold War era, in what the developers are calling a personality-driven shooter. You are Dick, the foul-mouthed, explosion loving killing machine that caused so much trouble for the enemy back in the 1980s. In the game, you use his methods and techniques, doing things just as he would on the battlefield. And Dick likes knives, so you’ll be slitting throats and stabbing enemies’ sides from behind. Also, he loves explosions, so expect to blow things up. Good fun, or at least it looked it.

What we saw was early, pre-alpha build early. And it looked it. Still, you could tell that they were headed to a good place graphically, though things were still a bit rough around the edges. While Dick’s model looked fine, the other enemies and some of the setting lacked the same polish. The setting was understandably drab and militaristic, and in places quite basic when compared to the character models. The music at this point? Bad. String stabs and tom fills. Forget pre-alpha. It was pre-good. But I’m sure they’ll polish that up too.

Throats. They get cut.

The first level we saw was set in the area around the Korean and Russian borders. Dick had been tracking some anti-ballistic missiles that were made in Korea and were to be moved across to Russia via train. His goal is to stop those missiles from getting to Russia. As Dick is a fan of big explosions, the goal in this stage is to plant explosives on a bridge where the missiles would cross to get into Russia, blowing them up before the train crosses.

We watched on as Dick picked off enemies with a sniper rifle. Later, changing up the pace, he would sneak up on unsuspecting victims and pick them off with a brutal finisher. Things would continue this way until a guard set off an alarm, which had Dick becoming a one-man fighting force. Eventually the C4 is planted on the bridge. Dick sneaks into a warehouse via a service elevator, gets a visual on the train, and then blows everything up. Mission accomplished.

Game play mixes two styles: infiltration and assault, though there didn’t seem to be any clear indication of which style should be used at any given time. We first witnessed one of the heavily touted “brutal kill moves,” which are essentially violent animations in reward for sneaking up on an enemy. Throats are slit. Sides are cut. Guns are shot through chins. Enemies are pushed over bridges. There’s more than 25 of these moves to surprise the enemy with. And many of these moves are accompanied by a memorable quote.

The voice of Marcinko in this game is supplied by actor Mickey Rourke. His gruff, low voice seems to fit Dick’s in-game visual, and developers say that Rourke’s performance matches Marcinko’s personality perfectly. And even though this was an early build, it seems that they made sure to pack in plenty of Rourke’s lines. A sly sounding “rest in peace, asshole” followed one brutal kill move. Ill-timed exclamations like “shit” or “fuck” or “fuck me” or Jesus fucking Christ” seemed more comedic than anything else. One stealth kill was followed by a hilarious “April fool, motherfucker,” much to the amusement of those in attendance. It seemed that Dick had a lot to say. To himself.

Rebellion worked directly with Marcinko, bringing him in as a consultant for the game. Developers say that he still regularly checks in on the game. He has signed off on his in-game likeness, the kill moves, heavy cussing and all. While he’s too old for motion capture, and not necessarily a good fit for voice overs, he’s still involved in the creation of Rogue Warrior.

So far, other than the main character himself, Rogue Warrior does not seem to bring anything new to the FPS table. The only stealth sequence presented to us seemed to fall flat on its face. Dick was to shoot out a light to distract a guard. He did so with a loud machine gun, which the guard did not seem to notice. Then he shot the guard as he came into inspect. It would have been easier (and cost less ammo) to just run in and shoot the guard in the first place!

We were also prompted to watch for one of the game’s “targets of opportunity,” which are environmental tools and circumstances that Dick can use to his advantage. Sadly, the example involved Dick shooting a fuse box in a warehouse to take the lights out, enabling him to use his — you guessed it — his night vision goggles. Dick went on to sneak up and kill some enemies in the dark, but these kills did not seem to have the impact they needed to seem worth the stealth effort. Why not just shoot them from a distance?

There is also a multiplayer mode in Rogue Warrior, which we did not see. It will have six unique maps, with deathmatch and team deathmatch modes for up to 16 players. All players will be able to use the game’s kill moves in these matches, and the top player will be skinned as Dick. Or, as the developer said, “the top player gets the Dick skin.”

A game about the experiences of an ex-Navy SEAL is a pretty solid idea, especially when he’s a larger-than-life character that has seen and done it all. But so far, the only standout ideas in Rogue Warrior are the focus on personality and maybe the kill moves. Otherwise, this appears to be just another first-person shooter with some sneaking elements. Let’s hope the developers can work in some more original concepts to make this game stand out from the pack.