Five hours, thirty two minutes, and seventeen seconds. That’s how much time I had spent on Mars before THQ snatched the Xbox 360 away from me that contained a near-final build of Red Faction: Guerrilla, Volition’s upcoming open-world third-person shooter.

In that time frame I had done my best to liberate Martian colonists from the heavy-handed and oppressive dictatorship of the Earth Defense Force (EDF). As part of a group of revolutionaries calling themselves “The Red Faction,” I had killed a total of 970 EDF soldiers (crushing 366 of them), destroyed 233 vehicles, and taken down 46 buildings. My five and a half hour rampage caused a whopping 481.81 Martian credits in damage, an amount which I could reasonably guess would equate to a lot of money in U.S. Earth dollars.

Yup, you’ll definitely blow a lot of s**t up when playing Red Faction: Guerrilla. Hit the jump to see how it all goes down. 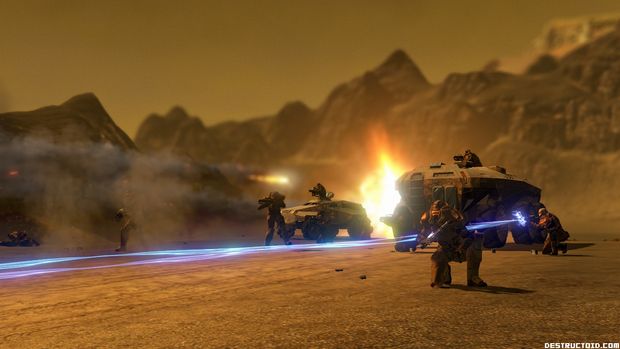 While it’s only been seven years since Red Faction 2 shipped, 50 in-game years have passed since the events of the sequel. The red planet has become a miserable place to live, with greedy Earth-based taking control and forcing colonists from their homes, and the EDF enforcing a military state that eventually leads to the formation of underground rebel groups. Despite all of this, Alec Mason is lured to Mars by his brother Dan, with the promise of making an honest living as a simple miner. Things don’t go as planned.

As part of the Red Faction, Dan is targeted by the EDF and killed, forcing Alec to reluctantly join the guerillas in their fight. The goal in the open-world game is to liberate six colonies — Parker, Dust, Badlands, Oasis, The Free Fire Zone, and Eos. By reducing EDF control and presence in each of the six areas, the Red Faction can lead an uprising that will free Mars.

As Alec, you can engage in a number of activities that will lend to the cause, all marked by various icons on a world map. Each colony on Mars has four different story-advancing missions that you must complete to move forward, but all of them can only be accessed by engaging in the different activities like destroying EDF properties of importance, or engaging in a number of different “Guerrilla Actions.”

In my play time I came across a handful of different activities that ranged from a “Guerrilla Raid” (helping a group of Red Faction soldiers raid an EDF-controlled property) to “House Arrest” missions (rescuing detained colonists and delivering them to a safehouse). Among my favorites was the “Heavy Iron” missions, activities focused on pure-chaos that usually involved taking out a large number of EDF soldiers and vehicles. One in particular had me controlling a walker, a robotic mech-like mining vehicle that I was able to swipe EDF soldiers, flip and toss vehicles, and smash through walls with ease. 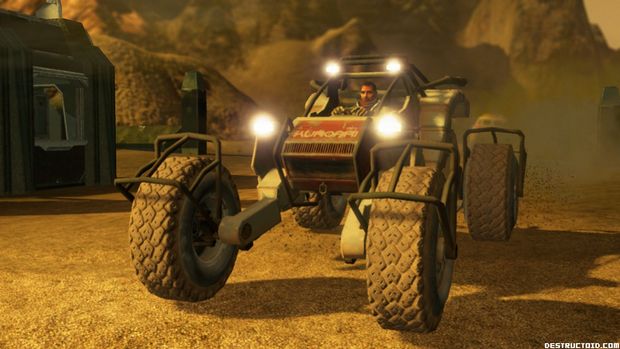 Which brings me to the game’s selling point — its destruction technology. Every structure you see in Red Faction: Guerrilla can be taken down by sheer force or with a little ingenuity. Because the tech keeps in mind real-world physics and the buildings architecturally sound, they simply won’t crumble to the ground in a few pieces or in a canned animation; in Guerrilla, it’s much more satisfying than that. By taking out pieces of the building that are supporting it, you can watch girders slide out from underneath objects as they slide to the ground, glass will shatter, buildings will lean and eventually topple. Standing inside a building that’s about to collapse under its own weight, you can hear the creaking of the metal that supports it, and you’ll know it’s time to bounce before the structure comes down around you.

It’s amazingly satisfying to watch it all go down, too. Whether you’ve fired a rocket at a key point in a building, used your mining hammer to smash support girders, or tossed remote bombs on various parts around the building, you’ll never see the same type of collapse twice. The destruction isn’t just for show, as it plays into gameplay in a number of a ways. Need to stop a convoy from following you? Take out an entire bridge using remote bombs or mines and watch it collapse. Need to enter a building to retrieve data important to the resistance? Forget walking in through the front door – smash a hole through a wall and just take it.

Your weapons of destruction cab be upgraded as well, by picking up pieces of salvage from destroyed buildings  or completing missions. Bringing the salvage to your comrade Samanya, she’ll MacGuyver artillery using various mining tools to create new weapons (like the Grinder which fires razor discs), upgrade your armor, and more. After five hours of casual play, I feel like I had barely scratched the surface of what Sam had to offer; Volition tells me that equipment like a rocket pack and further weapon enhancements all become available as you progress through the game. 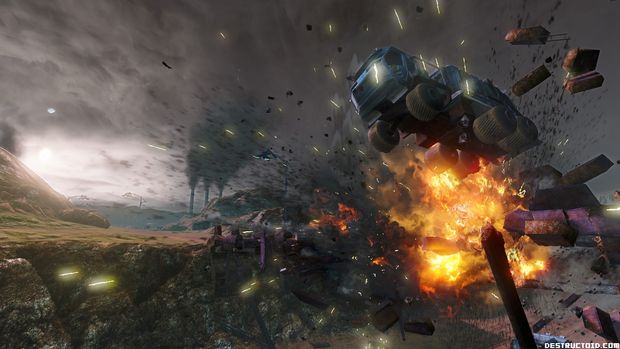 Mars is, well, Mars. It’s a cold, sandy planet with a population that hasn’t entirely settled in. The different areas each has its unique look — Oasis, an agricultural colony, even has some plant life and later areas will be covered in a white dust of snow. But to say there’s a lot of open terrain is an understatement, so you’ll be thankful there are a number of vehicles you’ll have access to. Trucks, pod cars, and off-road jeeps all handle a bit differently, but all will get you from point A to point B, so no complaining. In my five hours on Mars, I travel 157.06 kilometers, with a whopping  42.12 of them on foot. The terrain of Mars is certainly not easy on the feet; you’ll want to borrow or steal a vehicles every chance you get.

I managed to liberate four of the six areas in my playtime, pushing myself to finish the game before THQ took it away from me. I failed. All told, Volition says it could take upwards of 16 hours to make it through the entire story, simply going from mission to mission in an attempt to get to the end-game. Of course, that doesn’t take into account the various side quests or finding and destroying all 250 of the EDF Supply Creates strewn across the planet’s surface (think hidden packages or pigeons of Grand Theft Auto).

So while there’s plenty to see or do alone, the game also features a significant competitive multiplayer component. THQ gave us a chance to participate in a few matches of the standard deathmatch modes, called Anarchy and Team Anarchy, aptly named as the game’s real-time destruction lends itself to some of the craziest multiplayer battles seen in any title to date. Each player also has access to special tech that sets it apart from other run and gun online shooters. Things like the jet pack, the “Rhino” which allows player to barrel through both enemies and objects, or “Tremor” which can be used to take enemies off their feet or level structures. The online modes — which also include Capture the Flag, Damage Control, Siege, and Demolition – certainly don’t seem like an afterthought. 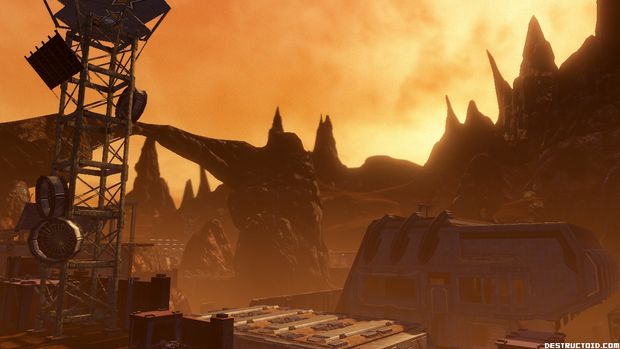 In a stroke of genius, Volition has also included an offline multiplayer “party play” mode called Wrecking Crew. A mix of Burnout’s crash mode and Boom Blox, Wrecking Crew has players passing the controller back and forth between turns as they’ll use a limited amount of resources to level structures and rack up as much points as possible in the process.

One variation called “Escalation” was particularly fun, limiting your ammo and abilities, forcing players to use the environment to their advantage to crack high scores. For example, taking out a large spire with your one rocket might be to your advantage, with the hope that it will collapse onto a building, causing even more damage. Wrecking Crew can be played with up to four players, and while it’s unfortunately only offline, it definitely looks like it’ll have some longevity as a fun drinking party game.

Red Faction: Guerrilla’s menu screen notes an option for downloadable content, but it wasn’t accessible to us, and Volition isn’t talking details. As I was told, it has “nothing to announce at this time,” but further conversation hinted that both single-player and multiplayer content was under consideration.

With Red Faction: Guerrilla’s June PlayStation 3 and Xbox 360 release right around the corner, THQ has already announced plans for a playable demo. Available sometime in April, you’ll have your chance to join in the fight to liberate Mars. And yup, you’ll definitely blow a lot of s**t up.