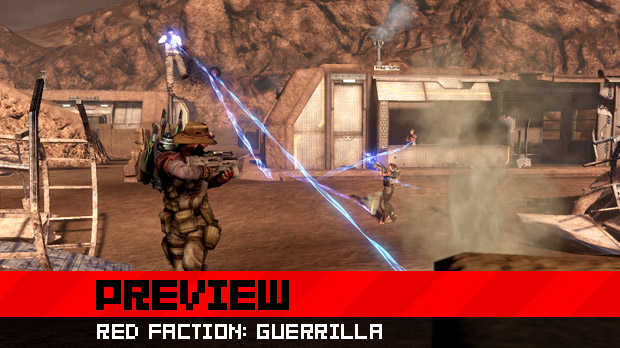 One of the first games I got when I picked up the PlayStation 2 was the original Red Faction. I would spend hours just “digging” holes leading off to nowhere in the hopes that I would “accidentally” dig my way to the final area. I tried playing the original again not too long ago, but quickly gave up, as it hasn’t aged that well.

I’ve been longing for some more Red Faction goodness for awhile now, especially after reading Nick’s single-player preview for Red Faction: Guerrilla. So I was pretty excited to play Guerrilla’s multiplayer mode this past week at a little event in San Francisco.

Hit the break for my impressions of Red Faction: Guerrilla’s multiplayer offerings. 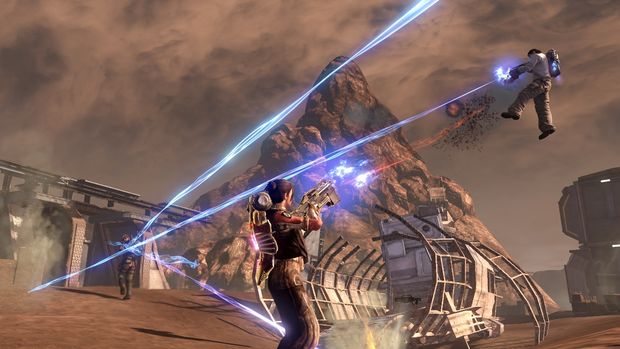 To begin, players will have some minor character customization features. Players can pick a character model, and then choose their character’s color patterns, primary and secondary emblem symbols, and the type of hammer they’ll take with them into multiplayer. There are going to be 125 different unlockables, which include more of everything listed above, including the legendary Ostrich hammer.

After messing with my character options for a bit, I jumped into a Capture The Flag match. As usual, I abandoned my teammates and hid in a corner to learn the controls. The right trigger fires your weapon, and you can fire a gun while walking or running. Clicking down on the right stick zooms in, bringing the camera closer to your character’s back. You can’t run when zoomed, in since zooming in is meant to give players a steady shot. Your ammo counter is also conveniently located right next to your aiming reticule and moves along with the reticule wherever you point it.

The move to a third-person perspective was rather surprising, since the two original Red Faction games were first-person, but I wouldn’t have it any other way after playing a couple of rounds. I never once had an issue with the camera; it was smart and responsive. 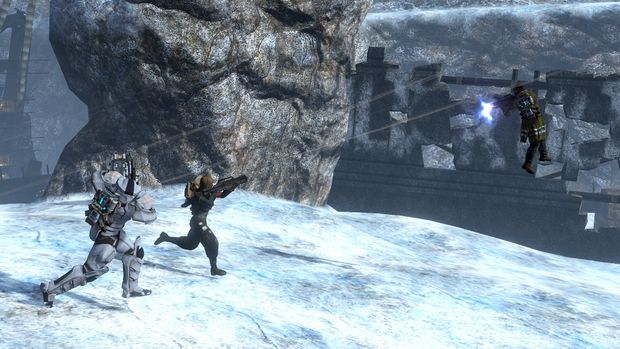 Players will have four weapon slots, one of which is locked for your hammer. Players can quickly cycle between two weapons by tapping the right bumper, and holding down the right bumper will bring up your four weapon slots in the bottom right corner of the screen, showing you all of your current guns. Each slot is assigned to one of the four face buttons, so you have to manually select a new weapon to add to your two quick cycle weapons. Having to manually select a new weapon was rather annoying, and I felt it would have been much better if you could just cycle through all four weapons.

There are 18 weapons, and they all offer something unique. You have your basic stuff like pistols, rocket launchers, sniper rifles and assault rifles. This is the future, though, so of course you have some crazy space-age shit to play around with too. There’s a gun that shoots out electricity, a gun that shoots out circular saw blades, a heat gun that melts anything it hits, vortex trip mines, and plenty more.

Pressing Y will let you pick up a new gun, and when all four slots are filled up, it will replace whatever gun you have in your hand. The X button reloads your weapon, B will let you detonate remote mines, A will perform a jump and the left trigger performs a melee with your gun. The melee attack is rather weak and almost unnecessary thanks to your hammer. The hammer is a one-hit kill, and people will get launched into the air when they get hit with it. It’s ridiculous fun just smacking people with it. 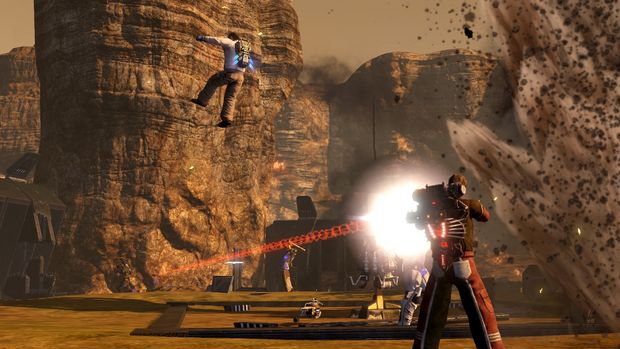 The only button left is the left bumper and that’s used for your backpacks. Backpacks give your character a perk. There are ten backpacks in total, giving your player such abilities as hovering in the air, running super fast, turning invisible, powering up your guns, shaking the ground, charging like a rhino and more. The backpack abilities last for a certain amount of time and need to recharge before their ability can be used again. The backpacks have meters on them that drain/fill up to indicate when they’re good to go again. The design of the packs reminds me a lot of the design of the Ghostbuster packs from the new game, actually.

Players will have regenerative health, and the health meter fills up pretty quickly once the player gets away from the bullets that are trying to tickle their insides to death. But if a player’s health drops near the bottom of the health meter (to about 10 percent of their overall health), they’ll remain at near-death levels for several seconds before they start to automatically heal up again.

There are 21 maps in total. Some are wide-open plains with not much in terms of buildings, some are small and packed full of buildings, and some are large maps with lots of buildings. Players can use explosives charges, rockets, the hammer and even the melee attack to demolish buildings. It’s rather ridiculous breaking open walls with a gun’s melee — as if the structure is made of paper or something. Buildings do have realistic physics and you can topple an entire building in no time if you take out the right support structures. I never noticed a building ever automatically heal over time, so I believe the damage stays in place throughout the entire match. 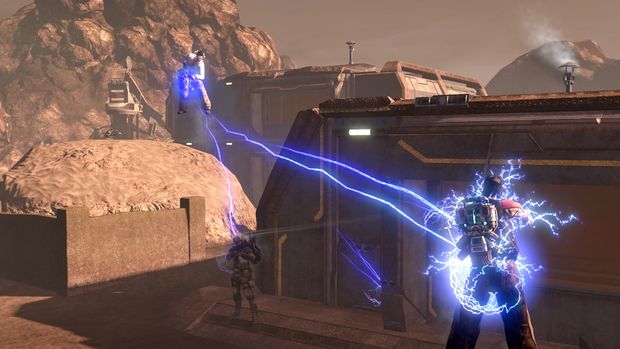 There are six online multiplayer modes: Anarchy (free-for-all), Team Anarchy (team deathmatch), Capture the Flag (you can use the flag as a weapon like the hammer), Siege, Demolition and Damage Control.

In Siege mode, one team needs to defend their base while the other team needs to destroy as much of the defending team’s base as possible. The defensive side has access to a weapon called the Reconstructor that will repair any damaged structure. The gun shoots out energy that makes the gun look like a flamethrower. In fact, that’s what I thought it was at first, and I used it on my enemies to no avail. Once a base has been fully destroyed, the defending team can’t repair it.

Demolition is Guerrilla’s VIP mode. Each side has a VIP, and the VIP needs to destroy as many structures and buildings as possible to earn points for their team. Teams can also kill the other team’s VIP to score some points. When a VIP is killed, the game will ask everyone in the team if they want to be the next VIP. Players have a choice to become the VIP, which is such a great feature in my opinion. Most games force a person to be a VIP and I just hate that. It makes sense to give the player a choice. Instead of forcing someone who just spawned with nothing to become the VIP, a player that’s all decked out with explosives can call dibs on being the VIP. 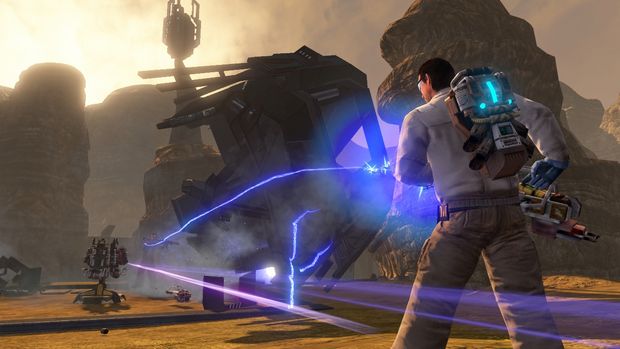 The last destruction type online mode is called Damage Control. There are three destroyed control points scattered on the map. Both teams need to reach the control point, grab the conveniently placed Reconstructor gun, and rebuild the point. If a control point is controlled by the opposing team, players will need to destroy it and then rebuild it to claim the point for their own team. If a team can hold all three control points, their score will double.

There’s one more multiplayer mode called Wrecking Crew, and it can only be played offline. Up to four players will take turns destroying as much as they can on a map with a limited amount of resources. There will be four rule sets, eight weapons, and four backpacks that players can use to cause as much destruction before passing off the controller.

Players can create custom matches, too. Players can make everyone start off with a certain amount of weapons, play using only the hammers, determine what type of backpacks are on the map, make players start off with a specific or random backpack and so on. There’s also a Spectator mode, which lets players just watch other people play. 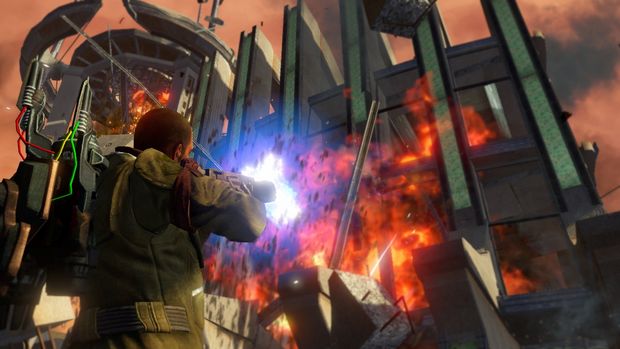 Red Faction: Guerrilla’s multiplayer is far from an afterthought, and Volition is going to be supporting Guerrilla for a long time. They’ll constantly be updating the playlists and they’re currently at work on the game’s downloadable content.

They put in a lot of work into it and it was a blast to play. The controls were solid (with the exception of gun cycling), there is a ton of content here, and it’s sure to keep people playing the game long after they’ve completed the single-player campaign.

Do yourself a favor and check out the multiplayer demo when it comes out on May 21.