When I visited Big Huge Games a few months back to get my first look at Kingdoms of Amalur: Reckoning, it was unmistakably just a sliver of what the massive open world will offer.

The promise of a rich, compelling original fantasy world is a lofty one, but Big Huge certainly has the muscle to back it up. Reckoning has an impressive team at its backbone: comic book legend Todd McFarlane presiding over the game’s art; award-winning fantasy author R.A. Salvatore guiding the narrative; and developer Ken Rolston (of Elder Scrolls III and IV fame) leading the game design show.

At Electronic Arts’ Los Angeles campus last week, I got a chance to not only see more of the game’s burgeoning world, but get my first hands-on with the game’s combat. As it turns out, the latter may be what sets this game apart from any title you’re disposed to compare it to. 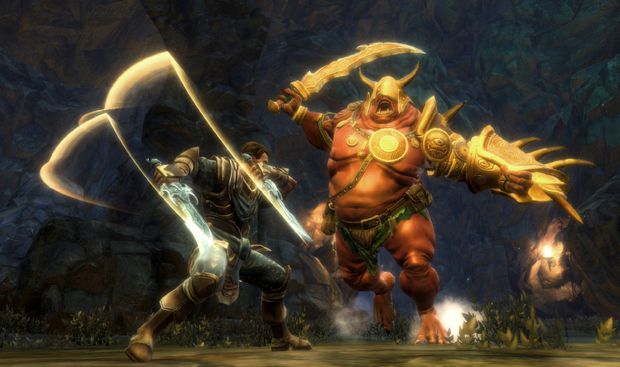 To be certain, on its surface, Reckoning is not likely to turn heads. It’s seemingly bursting with fantasy platitudes and role-playing game tropes. After a day full of demos after nearly a week of seeing videogame demos as part of the Game Critics Awards, bleary-eyed game journalists weren’t having it. The game looked okay, most said, competent on all levels that would lead to an enjoyable experience for fans of the genre. It looked a lot like a massively multiplayer online game, some said; the visual style, with its broad range of eye-popping primary colors, reminded a few of World of Warcraft.

But beneath the surface, Reckoning definitely appears to have more to offer than what most action role-playing games may have promised in the past. When Big Huge Games’ General Manager walks us into the hub city of Rathir, he speaks of its people and its history with conviction. He doesn’t have to; it’s not important to what he’s showing us — the game’s quest system, a little bit of how crafting works in Reckoning, and the repercussions of being a thief — but he does anyhow. 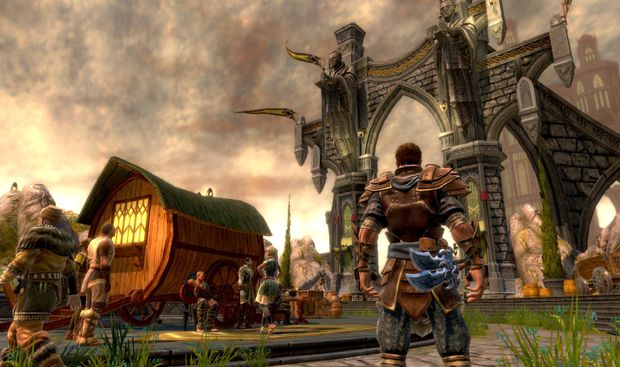 “This is the city of Rathir,” he tells us. “Now the city of Rathir plays a very important part within this world. This is the Dokkalsfar, or the dark elves’, capital city. It’s also the last kind of bastion of hope for the dark elves. The sister city across the water is Mel Senshir, which has been under siege by the Dokkalsfar’s mortal enemies the Tuatha for the last ten years.”

He continues on about how the city is responsible for contributing soldiers and supplies for a larger battle (one which gamers will play a part of) in the world of Amalur. He says these things as if he could, if pressed, draw a map of the world and with certainty detail the relationship between the Dookalsfar general’s daughter and her best friend. And what she ate for lunch, probably. Point: Salvatore’s input seems to be integral in providing Reckoning with an impressively substantial narrative backdrop.

Dunn takes his character and ducks behind an unsuspecting NPC. He points out that the on-screen “percent chance” he’ll be successful in pickpocketing, based on classic behind-the-scenes RPG stats and abilities. If he’s caught, he can pay a fine, resist arrest, or go straight to jail. Get locked up and you’ll be able to fight your way out, or you can use that pickpocketing skill again to nab a key from a guard and escape.

He shows us shops and various vendors of Rathir, this city far more colorful and full of life than anything I had seen previously in Amalur. Character go about their business; I caught one haggling with a shopkeeper over prices of some of his wares. Dunn finds a blacksmith and sets up shop, bringing up the game’s crafting screen. Using items found throughout the world, you can create objects by combining a core, hilt, binding, grip, and a gem stone. What items you will and can make will be dependent on your skills; Dunn makes ice daggers, which do additional ice damage, and that’s reflected in the item’s distinct look.

“We want to make sure that all of these things like ice and poison and fire are visual within the world,” he explains. 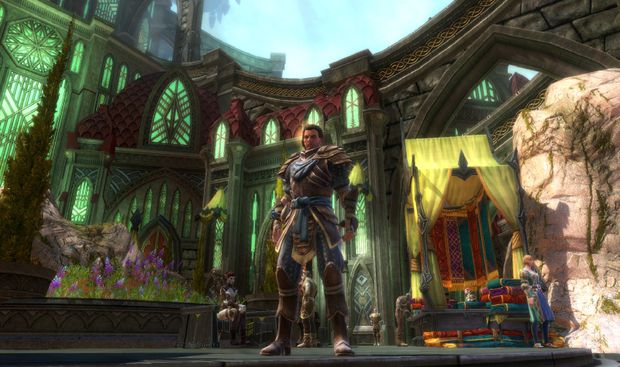 At this point, Reckoning may sound like it’s following in the footsteps of role-playing games that have come before it. Despite a number of clever and welcome in-game tweaks (which gamers will undoubtedly appreciate within the context of the game), it seems to be playing it decidedly safe. Then comes the first glimpse of battle.

Watching Dunn tear through enemies with his ice blades looks impressive, with varied animations and attacks that are simply fun to watch. But with a controller in your hand, it really drives home that Reckoning is as much about “action” as it is about the “RPG.”

Combat is fast, smooth, and responsive. With two buttons mapped to the weapons of my choice (a massive hammer and a pair of razor-sharp shakram), I was able to swiftly slice through enemies with satisfying heft and responsiveness. Fluid combos were based on the timing of button presses, and I was able to quickly switch between both weapons, chaining moves together in ways that were instantly gratifying and simply felt right.

My character was also equipped with a fast teleport move, generally used to evade enemy attacks. But this particular dash was something special, releasing a green puff of smoke as you moved; passing through enemies would render them poisoned, slowly leeching their life. I was also able to use a sneak attack, creeping up behind heedless enemies to deliver a potentially fatal blow. 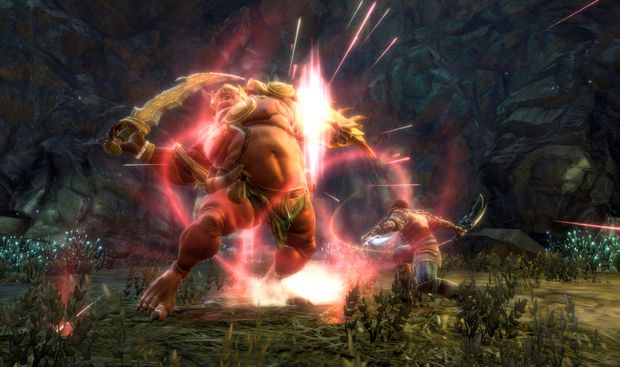 Many action role-playing game developers advertise that they mix traditional action combat with deep RPG systems. But the reality is that most focus on one over the other, with one suffering a middling fate. With Reckoning, it’s clear that both are being given care in equal measure. It feels every bit as God of War in your hands as it evokes Elder Scrolls with its massive world, quests, and character progression.

While the game seems so well adapted for a game controller, we’re told a control scheme is being translated for PC gamers who prefer mouse and keyboard support.

Kindgdoms of Amalur: Reckoning is in development for Xbox 360, PlayStation 3, and PC. If you’re a fan of either action or role-playing games, it’s a game you’ll definitely want on your radar in 2012.