Activision and Infinity Ward were kind enough to host an event in Hollywood last night to give us a first look at the multiplayer in Call of Duty: Modern Warfare 2. Infinity Ward’s Vince Zampella kicked off the event with a quick briefing. He opened with an admission that the company has been tight-lipped on the game’s multiplayer aspect. And then he yelled to the room: “Well, we’re f*cking talking about it tonight!”

They then shoveled tons of media people into one decked-out room where a few dozen Xbox 360s were set up with some maps of MW2 running. Each station was set up with a shiny LCD screen and some high-end Modern Warfare 2-themed headphones. Fancy. Infinity Ward people were on hand to walk us through the changes, but it took no time at all before games media people commenced killing. Promotions were popping up, giggling followed new weapon use, and attendees suddenly were all about the new throwing knife. Oh, the throwing knife.

A quick look at the event, which took place in Los Angeles on Tuesday night.

Infinity Ward gave us just enough to get our mouths watering and imaginations running. We only saw four gameplay modes and three maps. Still, those did exactly what IF and Activision planned — to show us that Modern Warfare 2′s multiplayer is a bigger and better version of that in the much-loved predecessor. The core of the gameplay is largely unchanged from COD4. Really, it’s things like tweaks to how things are handled, and a healthy increase in accessibility, that make MW2 the awesome upgrade that it is.

Ah, killstreaks. Crap players only see (or feel) them, while good ones dish them out. MW2 brings a whole bunch of new killstreak goodness for you to eat and/or dole out. Surely you remember the goodl ol’ UAV radar that comes with 3 consecutive kills. That is now followed by a new one that comes with 4 kills in a row, called “care packages.” These air drops actually fall somewhat randomly, and you’ll have to watch out, because the enemy can also pick them up. Sometimes it’s more ammo, but you can also potentially nab any of the available killstreaks. Get lucky, and you’ll get one of the better ones for a much lower killstreak “cost.” Speaking of the better ones, 5 kills brings about the awesome Predator Missile, which you control with your laptop from out in the field. On your laptop, you’ll see an overhead view; it lets you guide the damage to wherever you’d like. If you’re one of the “good ones,” you’ll get 11 kills in a row, letting you tear up the battlefield from the sky from an AC-130. I’ve never felt that joy, but I’m glad to know that someday I may, thanks to the random drops in the care packages.

They added a ton of perks, of course. I didn’t get the opportunity to see all of them — I was too busy being killed — but the ones I saw were cool. Bling gives you more weapon holding power, while Scavenger lets you rummage through the bodies on the battlefield for goodies.

Increases in accessibility were more obvious to me as a less than great player. I really appreciate that they’ve worked to help level the playing field in MW2. Just as killstreaks give you help when you’re good, Deathstreaks give you help when you suck. One of my favorites, Copycat, actually gives you — the crap player — the the rank, weapons, and abilities of that guy that just took you out in the Kill Cam. Revenge is sweet. The one that helped me out the most is Painkiller. It gives you a nice spawning health boost to help keep the heat off of you.

During my few hours of hands-on time, I noticed some neat changes in how things work. First off, your secondary weapon is no longer limited to pistols and the like. Load up a missile launcher if you wish. You sniping assholes can now tote around double the sniping power if you wish. Speaking of weapons, the new riot shield counts as one. I found that I was so busy watching my front with it equipped that my ass was an open target. I’m sure it’s cool, though.

Your other grenade slot has become an all-purpose slot now. Sure, you can still put frag grenades and such in that slot, but I’d bet some of the fun new additions would suit you better. The Tactical Insertion flares can be dropped anywhere on the map. Should they remain untouched, you’ll actually spawn at the drop point. This adds some very interesting strategy. Got a favorite spot? Use this flare and you’ll man it more easily. An early favorite use for this slot is the previously mentioned throwing knives. Media people at the event were having a blast working to take out enemies without bullets. A kill with the throwing knife is somehow both gratifying and hilarious. 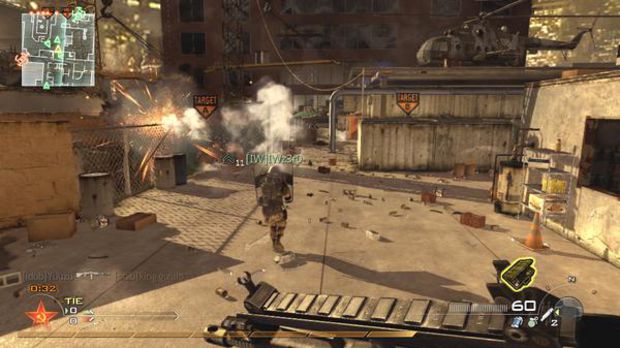 Highrise map, where shit gets crazy.

We only saw three last night. I’m sure Infinity Ward is sitting on the good stuff, but the three we saw were fantastic.

“Favela” is set in the somewhat slummy Rio de Janeiro. Doorless broken down buildings provide plenty of hiding places, as do dark, muddy alleyways. There’s not a lot of open space in this mazelike map, leaving you in close quarters, highly likely to find a surprise right around the corner.

“Highrise” starts you off among skyscrapers that appear to be in the middle of construction. It isn’t a map with high vantage points for sniping, as you’d probably imagine from its name. Instead, you’ll be ducking around temporary walls and office windows, trying to find out where the hell that gunfire is coming from.

“Afghan” is perhaps the most stunning of the three. Set in the desert, you’ll run around an amazing centerpiece: a blown-up airplane. This isn’t the flat desert you’re imagining, though. While there are wide-open spaces, broken plane sections provide cover. You’ll need that cover, as the surrounding hillsides provide ample places for snipers to pick off the slow and unfocused.

Surely you’ve heard that Domination is back. It is, and it’s good. We played that, Team Deathmatch, and two other modes. Capture the Flag, which you may have seen in the second multiplayer trailer, is new to Modern Warfare, and it’s great. But my favorite new mode, “Demolition,” is much more explosive — literally. Teams take turns: one team defends, while the other attacks a couple of bomb points on a map. The offensive team is trying to blow up both points in a set amount of time. If they do, they score a point. The defense, of course, is working to protect those bomb points. Then you switch. The team that has the most points after two rounds wins. This promotes team play and gives clear objectives, making for a nice change from the typical deathmatch.

Now that I think about it, we only got a small taste of what Modern Warfare 2‘s multiplayer will be last night. What I can say already is that it is very, very good, and fans of the original will surely be pleased. Everything from the increased accessiblity to the renewed focus on balance makes this an even better multiplayer game than COD4 was. The game technically isn’t even finished yet, bt I feel like I can already say that MW2 is going to have the multiplayer experience to beat. November can’t come soon enough!

Filed under... #Call of Duty#multiplayer#Top Stories