Last week, I put Metro 2033 through its paces, spending a day in the underground caverns of the Metro. I shot mutated rats, I played cat-and-mouse with bandits, and I wondered where all the bloody ammunition went. Read on as Destructoid previews Metro 2033! 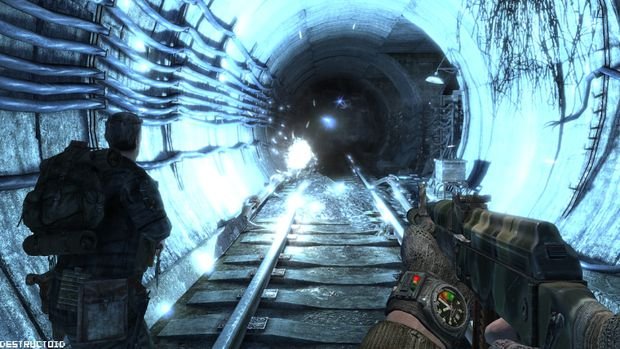 In 2013, the world was destroyed. World War III happened, and it obliterated the world as we know it. The survivors took refuse in the Moscow underground, and tried to live as best they could. In the year 2033, the Metro has become civilization. Each station is its own separate state. Some try to rebuild humanity, others have adopted extreme political and social ideals, while others have just decided to be arseholes. All the while, mankind is beset on all sides by mutant invaders, and terrible psychic adversaries called The Dark Ones.

Artyom, for reasons not yet known, is immune to the attacks of the Dark Ones, and it’s up to him to try and save what’s left of mankind. Players will step into Artyom’s shoes in a game that blends survival horror with first-person-shooting in a very dark, grim and atmospheric world.

Atmospheric is definitely the word for Metro 2033. If the game does one thing spectacularly well, it’s that it creates a moody and depressing world. You really get the sense that you’re witnessing humanity’s last stand, especially when visiting the Metro’s stations. The noise and chatter of crowds, the disheveled and grimy look, and the superb art direction help to make Metro 2033 feel both alive and dead at the same time. This game looks and sounds superb.

Metro 2033 is all about survival, about clinging on to precious, limited resources and doing one’s best to make it through each encounter alive. In some ways, 4A has succeeded tremendously. In others, however, it appears the studio has let its ambition get in the way of the gameplay. 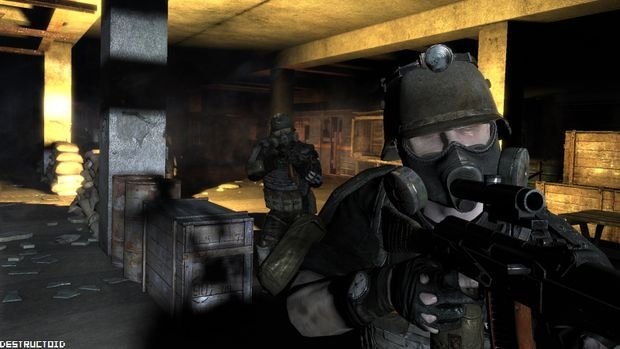 I’m going to come straight out and say it, and you’ll likely see similar statements if you read multiple previews — this game doesn’t have anywhere near enough ammunition in it. I get what the studio is trying to do by limiting resources, but the game is so unbalanced right now that the idea is completely buried under frustration and frankly unfair situations.

Most enemies take multiple shots to kill. and there are also opponents who can endlessly respawn by howling to call more friends. Not much of a problem, until you realize that you’ve got an automatic weapon with sixteen bullets in it. Throughout the course of my time with the game, I managed to get a maximum of maybe sixty bullets into my AK-47, all of which were completely drained by the time I was done fighting a handful of enemies.

Not enough ammo. Simple as that. The lack of firepower does not make the game interesting, unique, or fun. It makes it aggravating. Nearly every player I spoke to at the preview event was stuck at the same point, finding themselves outmatched by four mutants who could call allies, armed with about six shotgun shells and not a lot else. Bear in mind that most mutants will take about four shells to die, unless the game randomly assigns a headshot kill, since the hit detection seems wonky at best.

Perhaps this wouldn’t be so bad if you had a viable alternative, but the melee attack in this game is pathetic. The knife is weak, lacks the ability to stealth kill, and the camera swings wildly with each attempt to slash an enemy. Also, opponents will get wise to the knife and run behind you. Essentially, if you run out of ammo — and you will — you’re in for a very bad time. 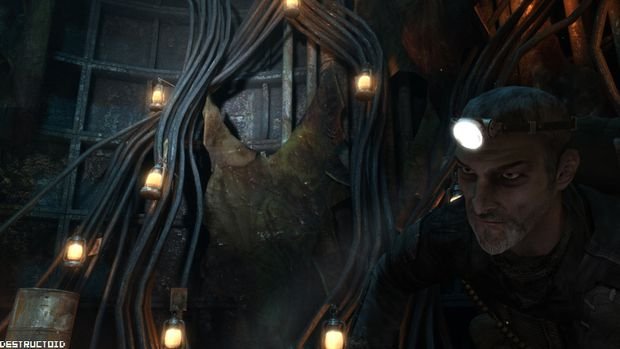 To make matters worse, this ammo situation completely ruins one of Metro 2033‘s most interesting gimmicks. Instead of money, the people of the Metro trade with military grade bullets. The bullets and weapons found underground were made after the apocalypse, meaning they are weak and hard to use. Pre-blast weapons and ammo are therefore worth their weight in gold. If you have pre-blast bullets, you can trade with them for more weapons or supplies.

These military grade bullets are also far more devastating than regular ammo. If you load your gun with these shiny, golden beauties, you’ll do three times the damage that you would with normal ammo. In theory, this is a fresh and brilliant take on currency, and forces players to choose between having money, or essentially spending their cash to take out a difficult enemy. Unfortunately, however, the lack of any kind of ammo in the game renders this choice completely moot. Simple fact is this — you need to spend the military grade bullets. You’ll have nothing else to shoot with.

I’m being very hard on the game, but that’s because I really, really want to love it. Metro 2033 does some great things. The story is interesting, the characters are terrific, and there are some wonderfully tense moments. The sections where Artyom leaves the Metro and must fight his way around the surface while making sure that his gas mask doesn’t break or run out of air are amazingly scary. Unfortunately, the fact that the combat is totally screwed right now overshadows everything. I do want to love Metro 2033, but it’s fighting me every step of the way. 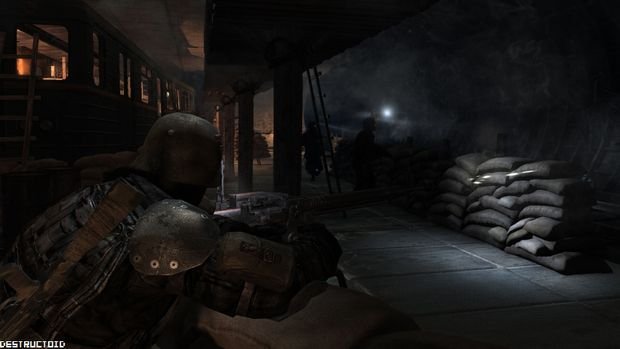 There are also a few other design decisions that get in the way. For example, Artyom’s torch runs off a battery, one that must be constantly kept charged by pumping it up. This wouldn’t be a problem except that the battery drains literally within minutes, and the torch must be kept on for the majority of this dark, dark game. Having to stop every few minutes to bring out the battery and recharge it is incredibly annoying. Speaking of annoying, the game needs to stop putting gas masks and doors all over the place without letting players know which ones can be interacted with, and which ones can’t.

As far as graphics go, the game looks pretty good, but there is currently a very odd bug that renders textures several seconds too late. It’s very disconcerting to see a shiny, featureless face on a character that will suddenly pop in with detail after the camera’s been focused on it for a few moments. This not only happens during the game, but in cutscenes as well.

All of these annoyances are a grim shame, because when the game works, it really does work. The combat can be tense and terrifying. Each encounter can last a long time, especially against human enemies. Artyom will be able to hide and sneak and stalk his enemies, turning off lights to hide himself in the shadows and use the torchlight of enemies to detect their locations. Unfortunately, the lack of a stealth kill negates much of the potential for cat-and-mouse combat. When I sneak up on an enemy, I want to be rewarded. I don’t want my weak butterknife to merely graze him while he alerts everybody else to my position. Only special throwing knives are able to kill foes in one shot, and of course, they are in short supply.

This is Metro 2033‘s biggest problem — every time it does something well, there’s a caveat. Every time the game thrills, it throws in an annoyance to spoil the mood. I wouldn’t be half as aggravated by it if the game was outright terrible, but it isn’t. It’s a solid shooter with a fantastic premise, and this is what makes the flaws so much more frustrating. It is my earnest hope that a harsh preview does not fall on deaf ears. The studio has until March to turn it around, and I hope that it happens. This game has too much potential to be squandered on ill-advised design ideas.