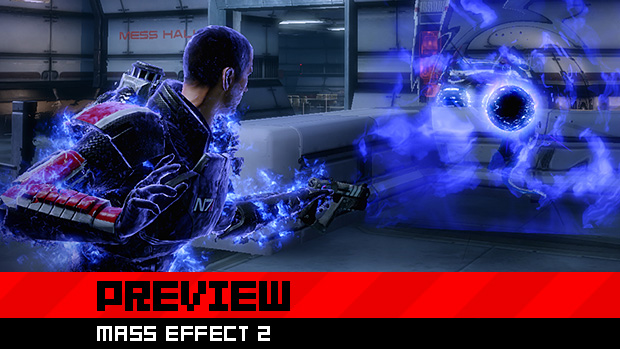 Some of you have been eagerly anticipating the sequel to BioWare’s 2007 action-RPG-shooter-space-exploration-thing Mass Effect. Some of you have not. I can empathize with both groups.

I quite liked Mass Effect, but I enjoyed it in such a way that if anyone told me that they didn’t like it, I would immediately understand why. It was a sort-of-good shooter, a sort-of-good RPG, and had a sort-of-good story, but they never really combined to form anything truly mind-blowing.

Mass Effect 2 seems like it’s shaping up to be better, for whatever that’s worth. To find out exactly how much better, and why, you’ll have to hit the jump. (Spoilers ensue).

The story, far as I can tell, is that something blows up the Normandy (your ship from the first game) and kills Shepard. The Cerberus organization spends the next two years reconstructing Shepard’s body so he can come back and fight a race of beings known as Collectors, who are somehow in cahoots with the evil Reapers from the first game.

Structurally, the premise (as explained to me) of the overall experience is as follows: you recruit NPCs to your team and complete quests to further the story and unlock new areas. Typical BioWare stuff. At a certain point, however, Shepard’s final “suicide mission” (project director Casey Hudson’s words, not mine) will become available to the player. Depending on how well the player has equipped the Normandy, which NPCs the player has recruited and how loyal they are to him, the player may have to watch as some or all of Shepard’s crew die during the suicide mission — including Shepard himself. Hudson promised that it’d be possible to get through the game without losing any of your squadmates, but that it’d be very difficult to do so.

I have to admit — this aspect of the game is what really gets me excited about Mass Effect 2, but the portions of the demo I played through were effectively divorced from the suicide mission. I’ll take BioWare’s word for it that the larger game will involve a great deal of preparation for, and difficult choices during the suicide mission, but I only got to see some initial story bits and the revamped gunplay. 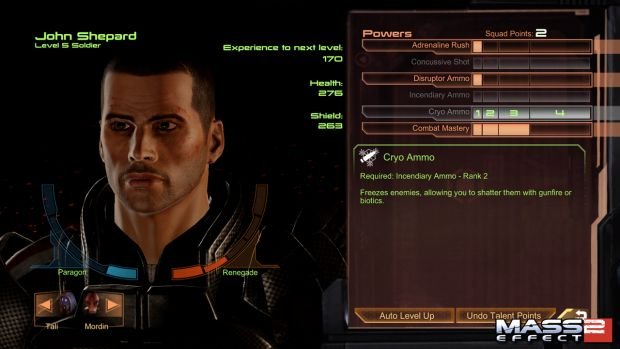 The first level I played was allegedly from the very beginning of the game, taking place after some spoilerish stuff that we weren’t allowed to see. Shepard, having just been resurrected by Cerberus’ Lazarus Project, finds himself under attack by a bunch of security mechs.

The first thing I noticed is that the shooting feels much better. The enemies still take a metric fuck-ton of damage to kill, sure, but everything else feels much tighter, and faster (not to mention the weapon overheating system from the original game has been swapped out in favor of a more traditional, ammo-based system). For the first time, the game actually felt like a real third-person shooter, rather than a game where you just so happen to shoot people, from a third-person perspective. Shepard’s aim is much improved, and no longer as reliant on your skill stats: so long as you can pull off a headshot, the game’s RPG elements will no longer ignore your skill in favor of counting up arbitrary stat points in particular weapon efficiencies. You still need to pump points into your biotic powers if you want to throw someone across the room with the touch of a button, but my success in the game’s gunfights had much more to do with my ability to take good cover and aim correctly than whether or not I was using a weapon my character was allegedly proficient in.

After escaping the Lazarus station I met the Illusive Man, who not only gave me a specific and general mission (“go to this colony where all the humans suddenly disappeared” and “kill all the bad guys who are making humans suddenly disappear,” respectively), but gave me a sort of where-are-they-now summary of Shepard’s previous allies from the first game. As it’s been two years since Shepard sorta-died, your buddies have since moved on, and thus can’t join your crew for the duration of the game. Wrex went back to the Krogan homeworld and attempted to unite his race, Li’ara started working for some shadow company, Ashley kept being an overly-violent Alliance soldier, and so on and so forth. However, the real reason for your friends’ unavailability, as far as I can tell, is that some of them will be necessary to the story of Mass Effect 3 and since you have the capacity to let some or all of your ME2 companions die in the suicide mission at the end of the game, BioWare didn’t want you screwing up the narrative by killing off important characters too early. You’ll still be able to meet some or all of the characters throughout the game — I found Tali searching for a lost member of her tribe in the newly-vacant human settlement — but as far as I could tell, you won’t be able to recruit any of them back into your team. 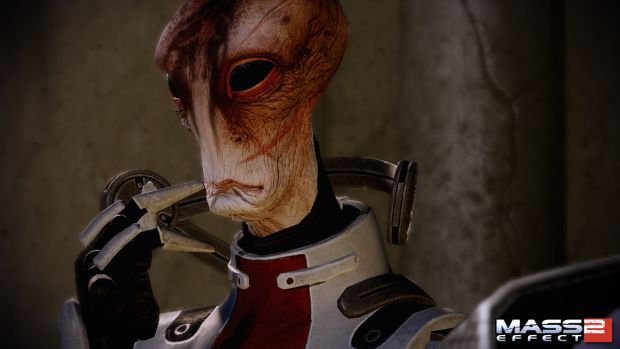 Once I reached the second mission (which, far as I can tell, tasked Shepard with recruiting a Salarian doctor named Mordin to his suicide squad), I began to play around with the new upgrades to the squad system. Your teammates still function pretty much as they did in the first game — there will always be two of them, and you can give them orders during combat — but their implementation has been improved. You can now give individual orders to each squad member by pressing their context-sensitive dpad button. If you want Jacob to use a biotic pull on an enemy, for instance, you can aim at the baddie and question and press left on the dpad; if you want him to instead take cover somewhere else, you aim at the location and press the same button. This felt satisfyingly fluid and fun when it worked, and awkward and irritating when it frequently did not. I tried to get Miranda to use her overload skill on a Vorch enemy, but my aim was just slightly off, and she instead proceeded to charge toward the area I had accidentally just told her to rush to. It didn’t end particularly well for her.

Still, though, this was a preview build. If they can get the hiccups sorted out, the ability to give individual orders to individual squadmates could add considerable strategic value to the gunfights. It’s been a while since I played the first game, but I don’t remember the gunfights being as outright intense and challenging as they were in the bits of ME2 I played: I found myself frequently getting flanked by Krogan guards while their weaker enemies suppressed me from the front, and I died more than a few times in my attempts to cure the Omega slums. Granted, this sort of gunplay is pretty much par for the course if we’re talking about games like Gears of War or Uncharted 2, but it came as a heck of a pleasant surprise coming from Mass Effect 2 — sort of like finding out your grandmother knows how to beatbox.

The town doctor, Mordin, asked me to go find his apprentice. All through my day at BioWare, I kept hearing that Mass Effect 2 would be full of tough, consequential decisions that didn’t revolve around the player arbitrarily deciding to be good or evil just for the sake of being good and evil. I only encountered one or two moral choices in my time with the demo, but neither of them seemed to require the sort of internal deliberation I was told the game dealt in. Upon finding Mordin’s apprentice standing at the end of a Vorch’s pistol, all I had to do was use the Paragon dialogue option (the one that tends to be in blue, if you remember), and the baddies let the guy go. I could have then killed them, but I didn’t. Perhaps the real moral decisions will come into play once Shepard embarks on the suicide mission or begins to directly prepare for it — if the game really deals in difficult choices, I didn’t see any of them in the demo. 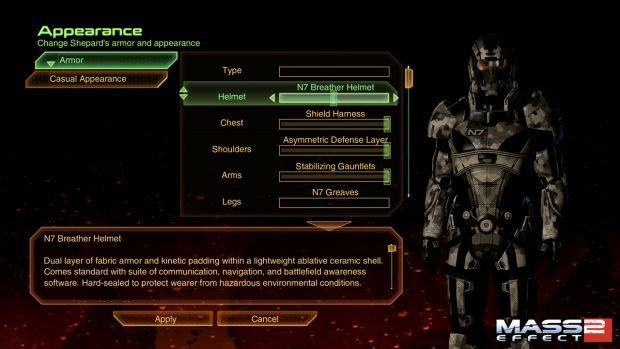 That pretty much wrapped up my time with the demo. Some final, random observations:

– Miranda, a new female companion who looks somewhat like a perpetually smirking Sophia Myles, seems to be the ME2 equivalent of Ashley Williams from the first game. The very first time I saw her, she shot one of my companions in the face for being a traitor. Can’t see myself growing to like the chick, but hell if she didn’t have an attention-grabbing introduction.

– Up until the lead system designer noticed what I was doing, I got to play the PC build for a little longer than I was supposed to and managed to dick around inside the new version of the Normandy. It’s basically a bigger, if slightly more streamlined version of the ship from the first game. Seth Green is back as Joker, the ship’s pilot, and you can customize Shepard’s personal living quarters (meaning, he has an aquarium and you can put fish in it).

– The unusual, almost John Carpenter-esque music from the first game is back. I really loved the weird, pseudo-80’s feel to the first game’s soundtrack, and was pleasantly surprised to find a similar style being used in the second game.

All in all, my time with Mass Effect 2 left me convinced it’d be better than the first game in most respects. It remains to be seen exactly how difficult the moral choices you’ll have to make will be, but the combat feels much better and, though I didn’t get to play with it directly, the whole structure of the game in relation to its final suicide mission sounded really, really interesting. I dunno if all of this will be enough to sway those who didn’t care for the first game, but I certainly left Edmonton looking forward to Mass Effect 2.