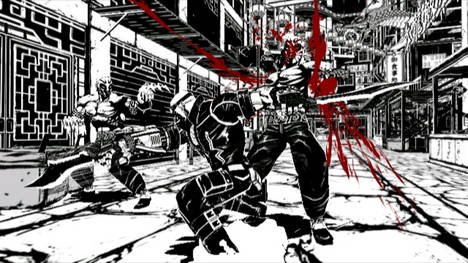 Last Friday, Sega invited me out to their offices in San Francisco to check out MadWorld for the Wii. MadWorld is on the minds of most of the staff at Destructoid, and for good reason. It’s an ultra-violent game made by ex-members of Clover exclusively for the Wii, of all systems.

I shared the same interest as my fellow editors did, but I was cautiously optimistic. I didn’t want to get hyped up on another Wii game only to end up extremely disappointed again. After my hands-on time with the game though, I can easily say that I’m definitely getting MadWorld once it’s released.

Hit the jump to read my impressions on MadWorld, and to find out why a trombone is the best weapon in the game. 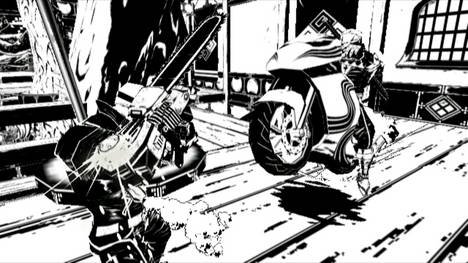 As you’ve seen numerous times by now, MadWorld is a black and white game, with the exception of the gallons of red blood that will be spilled as you play. The aim of the game is to have the main character, Jack, kill everyone that gets in his way. Jack is stuck on a game show called Death Watch, and he must kill everyone to survive.

All of the levels are designed with murderous mayhem in mind. There are walls with spikes, giant spinning blades, and all sorts of other goodies that Jack can use to kill people. The better the kill, the more points players will earn. Best of all, Jack has a chainsaw for an arm! Groovy.

Controls are pretty straightforward. Move Jack with the Nunchuk, press C to reposition the camera behind Jack, jump with Z, shake the Nunchuck to evade, press A to throw punches/grab people, and B to whip out Jack’s chainsaw. Players will have to hold down the B button to keep the chainsaw out and swing the Wiimote (either horizontally or vertically) for the chainsaw to slash at something. The chainsaw has a gas meter, so players won’t be able to constantly use it, but the gas does refill over time. 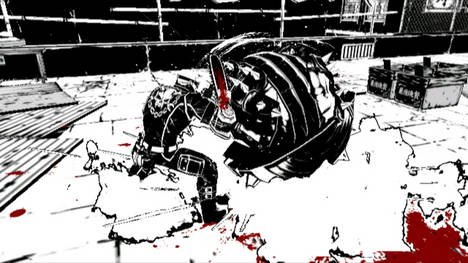 Killing is undeniably fun each and every time you do it. There are over 1,000 ways to kill people, from hazards in your environment to the moves that Jack can perform. If you beat up a guy enough, he will get dazed and players can perform finishing moves by using motion controls. Players can toss a guy into the air and stick their chainsaw into his belly as he comes back down, or do a back breaker on an enemy … the list of moves goes on.

As you kill people, you’ll score points. Performing combos or using special environmental weapons will give players more points and once a certain amount of points are reached, a mini-game is unlocked within the level. There were two mini-games, called Bloodbath Challenges, that I got to try out.

When you reach the special area with the Bloodbath Challenge in the level, a cut-scene is triggered and a man named the Black Baron sets up the mini-game. He tells you what you have to do, but this is a super-violent game after all, so where’s the fun in just being told what to do? As soon as the Black Baron finishes talking, his sexy ho — wearing an extremely skimpy outfit and spikes on her nipples — comes onto the scene and shows you exactly what you have to do for the challenge, using Black Baron as the example. In the case of the first Bloodbath Challenge called Death Press, the ho forces Black Baron into a pit where a giant spiked wall comes crashing down onto him, filling the hole with Black Baron’s blood. Black Baron never really dies; you’ll see him again for all the other Bloodbath Challenges. 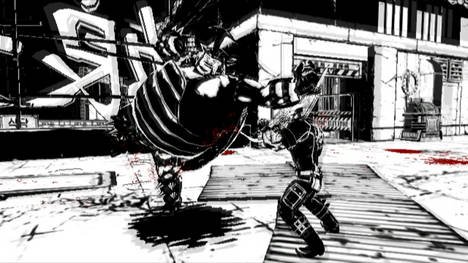 After filling the hole with enough blood, a new weapon is unlocked for Jack to use. The new weapons, in this case, are a couple of long daggers that can be equipped by using the D-pad. The weapons can be holstered, but will eventually disappear.

After making my way further into the level, I accumulated some more points and a new Bloodbath Challenge was unlocked. This one is called Man Darts, and the object was to use a baseball bat to hit guys into a giant dartboard. Players have to power up the bat and then swing the Wiimote to knock someone into the dartboard.

One of my favorite parts of the game — next to the killing, of course — is the music and audio. The music in the game really fits what MadWorld is all about, and I really hope a soundtrack CD is released. As you play, you’ll also get to hear commentary from two of the show’s hosts. Their banter is pretty hilarious, and they will comment on things you do as you play the game, with an impressive grasp of the word “fuck.” Even better is the fact that Greg Proops (Whose Line is it Anyway) and John DiMaggio (Bender from Futurama, Marcus Fenix from Gears of War) are the voices behind the commentators.

Right now, my only complaints with the game are the enemy AI and camera. The AI rarely put up a real challenge as I fought them — they barely defended themselves, for that matter. The camera also needed some babysitting. There were a lot of times that I had to manually reset the camera to get it to snap behind Jack. It got pretty annoying having to do this every time, and I feel the camera would be much better suited if it was always positioned on Jack’s back. 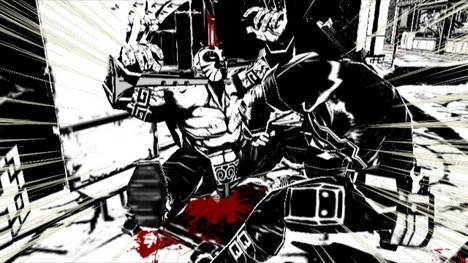 Oh, and the best weapon in the game? Easily the trombone. Before playing MadWorld, the North American producer on the game played through a never-before-seen level called Asian Town. As he was fighting bad guys, he found a trombone and jammed it into a guy’s neck. The trombone won’t kill the guy, and in this case, you actually should let him live. As you fight other baddies, you’ll occasionally hear a sad toot sound come from the trombone. It’s pretty hilarious every time you hear the sound, knowing that a guy with a trombone jammed into his neck is stumbling around somewhere.

Be sure to hit up New York Comic Con next month, as Sega will be showing off MadWorld and a couple of their other upcoming games at the show.

MadWorld is developed by Platinum Games and produced by Sega. It will be out March 2009 for the Wii.