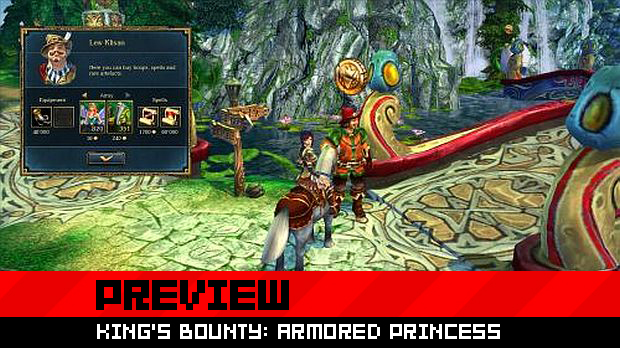 You know, during Another Night in Moscow, there was one game that immediately attracted my attention: King’s Bounty: Armored Princess. First of all, there was something really was off about it, especially in its presentation. I mean, the whole screen was a jumbled mess of color, how can this be playable? Then I realized, the game was being put out in 3D, which considering the amount of 3D game content on the market, this alone is worthy of at least some attention, right?

It was after that that I found out the game is a tactical RPG with cuddly dragons, a hex-grid based battle system, with a life as a sequel to King’s Bounty: The Legend (which is in itself a reboot of a Commodore 64 game, King’s Bounty), and it was then I actually wanted to check the game out.

So how does it play out? Is it worth our attention? And is that 3D really worth it in this game? Hit the jump for my impressions.

First of all, King’s Bounty: Armored Princess tells the story of Princess Amelie, a warrior princess brought forth into the dream world of Teana, starting out on the continent of Rhea. It is here that the player starts running about and finding out why Amelie is in this universe. Seems people are getting sucked into the world and not knowing quite why. Anyway, this overworld is a very crowded place, with lots of bad guys to fight, shops to shop at, and people to talk to.

I mention crowded, because it is. Between all of the trees and buildings and stuff, it can be a little tricky to get around, but when you unlock the Pegasus ability (which is unlocked from the beginning in my demo build), things get a little easier to get around. In positive, I do have to say it is refreshing to play an RPG where an overworld is packed with things to do, as opposed to fast stretches of space padded out with random battles. So this facet could be convenient or irritating, but it’s too early to tell.

Besides running around and shopping, talking to fighters to join with you, having painters paint your pet  dragon, or picking up gold and runes, the actual battles are probably the most interesting portion of the game. What happens is that Princess Amelie, even though she is decked out in knightly garb and assigned classes such as mage or paladin, she doesn’t actually fight in the battle. 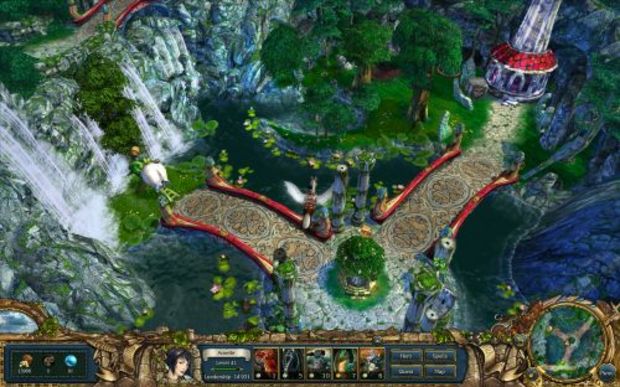 Yes, while she can send out magical spells, which is where her own class takes into effect determining how much of certain reserves of mana and stuff she has, the real action takes place on a grid with a squad of fighters. You can only have a few with you at a time, but holy knights, support mages, robotic guns, griffins, snakes, and a whole lot more can be recruited to fight for you. They are shuffled about in a hex-based grid system depending on the fight, and it is here that you move the characters around to fight. It actually feels very much like a tighter scale tactical RPG, with fields being fairly small, which is good for a small 5 on 5 battle.

In addition to the fighters on the field and Amilie’s magic, she has a small pet dragon (looking just like Stitch from Lilo and Stitch) that can do extra attacks and summons around the field. You can have him bring you new fighters with the help of a dropped egg, or he can come forth with a slamming attack. Also, he sits around watching the battle while eating apples, which is adorable. Apparently, the dragon aspect of the game is going to be fairly important, so if you like having cute little pets in games, this is probably a plus.

Graphically, the game seems to be on par with many games set in colorful fantasy universes. I’m talking a little bit better than WoW quality, and the character design looks to be pretty great, straddling the line between “cool” and “fun”.  Music seems to be a good mix of epic fantasy scores and while the game doesn’t have any voice acting, the NPCs good naturedly make jokes, so it’s nice to see another game that doesn’t take itself too seriously. 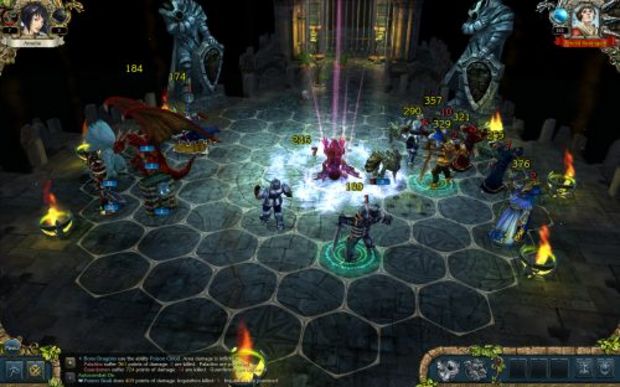 Finally, I have to mention the 3D. While I was way into it at the beginning of the night, actually sitting down to play it was problematic, as I got very very nauseous once those glasses got on. Ok, it might have been the Russian cuisine that I was sampling for the first time, or the vodka they wanted us to try (it was Kirkland’s from Costco), but with that game in 3D, my eyes wouldn’t focus on anything, sending my stomach into all sorts of nasty loops.

When I figured out how the 3D was working, yes, it looked very cool, but for the few minutes I could handle playing, I struggled clicking on the right areas to do what I want. This would have probably been the right time to use the auto-battle mode, a handy button that lets your battles play out for you. Really though, no sort of graphical filtering should make playing a game more difficult, so I can see this remaining a novelty.