Years after the events of the original game, Lynch has found himself a new home in Shanghai. Lynch is part of a small crime syndicate made up of ex-patriots from various countries and the group has been making money by doing an assortment of small jobs. The time has finally come for Lynch’s crew to make some real money with a big job that’s fallen into their laps, but Lynch wants to make sure all their bases are covered first before taking the job on. So he calls his old buddy, Kane, for help.

For whatever reason, Lynch is able to convince Kane to come to Shanghai without telling him any real details about the plan. You would think Kane seems to have gone crazy himself now, but truth is that Kane wants the money to give his daughter the life she deserves.

Love — It makes you do really stupid sh*t. Read on after the break to learn more about Kane & Lynch 2: Dog Days. 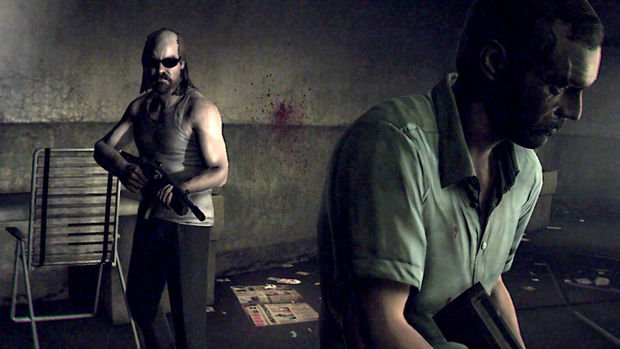 In the first Kane & Lynch, you played as Kane who’s a very smart and tactical kind of guy. In Dog Days, you’re playing as Lynch who’s a borderline psychopath. He’s the kind of guy that shoots first and ask questions later and IO Interactive wants players to really get a sense of Lynch’s persona by giving the game a very gritty and frenzy-like feeling.

As you’re running around in the game, you’ll get the feeling that you’re watching an episode of Cops. Dog Days gives you the sense that a camera crew is following Lynch and the gang around. The camera shakes as you run, the picture refocuses when players look directly at a light source and in a very clever move, the screen gets pixaleted when the player gets hurt. Even more fun is when an explosion goes off near the player. The screen gets completely distorted and takes several seconds for the image to readjust. 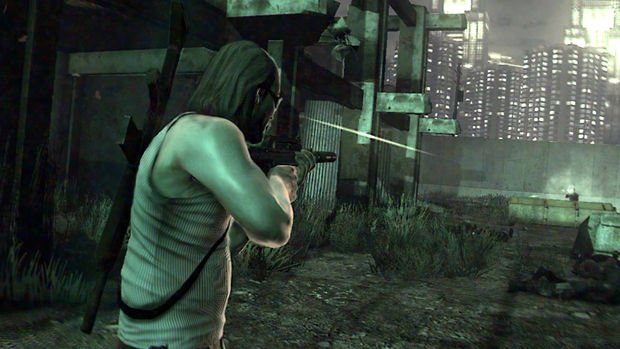 At first, I thought the build of Dog Days I was being shown was broken, but I quickly realized that the “low quality” feel with the visuals IO is going for really helps set the tone of the game. Dogs Days is doing something really unique with it’s presentation that I think a lot of people will be able to get into so long as it’s given a chance.

Gameplay wise, Dog Days is a third-person shooter and has the features you’d come to expect in a game like this. You can hide behind cover, use your enemies as human shields and you’ll be able to use the environment to your advantage such as shooting fire extinguishers to cause small explosions. Along with the traditional stuff, Dog Days has a feature called “Down not dead.” If a player gets knocked down by enemy fire, the player will have three options in handling the situation. Players can either crawl out of the way to let their health recover, fire from the ground until it’s clear to get back up or immediately stand up with the little health you have left. Enemy characters also have the “down not dead” ability.

Co-op makes a return in Dog Days and this time you’ll be able to play co-op online as well as offline. Throughout the game, there are parts where one player can take the high road while the other takes the low road. It’s not a forced choice for either player, but the option is there for people that want to use some tactics. In one of the levels that was shown, Kane runs into a battle while Lynch makes his way to a roof and provides fire from the elevated position. There are instances where both players will need to work together as well, such as opening up large doors or helping each other get over a wall. 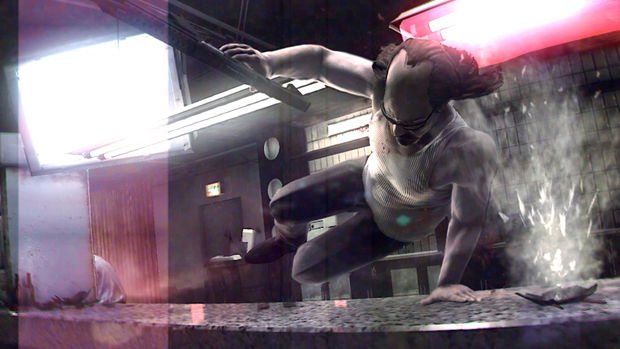 While the unique look and feel of Dog Days really impressed me, I can’t say much for the rest of what I saw. That’s not to say the game is bad. We were shown a very early build of Dog Days and a lot of work still needs to be put in before I can get a real sense of what to expect from the final product. My main concern with Dog Days is AI for the enemies and allies. Most of the time, the enemies would just run out in the open ignoring any cover they could have used.

We’ll be able to get a better sense of how the game is coming along in a couple of months at the Game Developers Conference. We should be getting hands-on time as well as getting a look at Kane & Lynch 2’s multiplayer.