If you’ve been following, you know that Halo: ODST ships on September 22nd, and with it comes a brand new gameplay experience. ” Firefight” is a multiplayer cooperative that is completely new to the Halo universe — up to four players team up together on new maps to take down waves of Covenant bastards.

It’s Bungie’s answer to what they hear as a fan outcry for a multiplayer experience that is more cohesive than team slayer and involves AI. Personally, I was getting sick of being repeatedly “pwned” from behind by Mythic players online, and I can’t imagine it was any fun for them either, so Firefight is pretty exciting for multiple reasons. 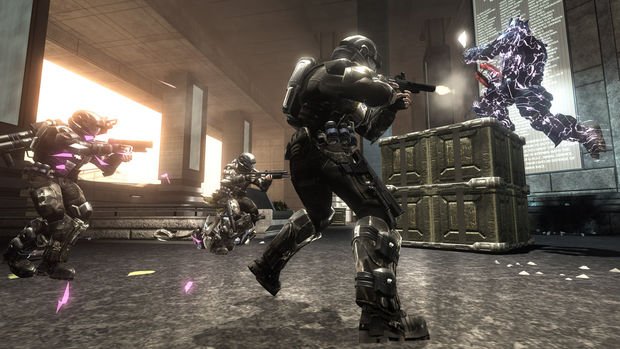 “Firefight” isn’t a new concept to the world of online multiplayer first person shooters — Gears of War 2 has “Horde,” for example — but it is the first of its kind in the Halo series. Built to encourage — nay, demand — cohesive team play, “Firefight” starts the players off together in position to take on waves of Covenant from dropships in what might be the most brutal assault I’ve ever witnessed in the Halo universe. Let’s get one thing straight: “Firefight” hits you hard. It’s as though someone injected the grunts with angry wasps. In their butts. Then handed them grenades, showed them a picture of an ODST, and pushed them off the side of the dropship.

I think the most interesting part of watching a room full of Mythic players play “Firefight” for the first time was witnessing them drop like flies in the first few minutes of playing. I’m not going to claim that I’m anything but a brutally awful Halo player; I’ve been playing for what is now five years, and I will always suck. So, out of respect for not dragging the teams down, I opted to stand up for the first few minutes of playing (there were more players than stations); I’m glad I did.

As the first four team members loaded the game up and debated their difficulty level, I caught a glimpse of Designer Lars Bakken’s shoulders shrugging in what seemed like a stifled chuckle. There was something about the way he said “That’s a bad idea” that made everyone stop and look at him, cursors hovering over Heroic. They soon found out why. 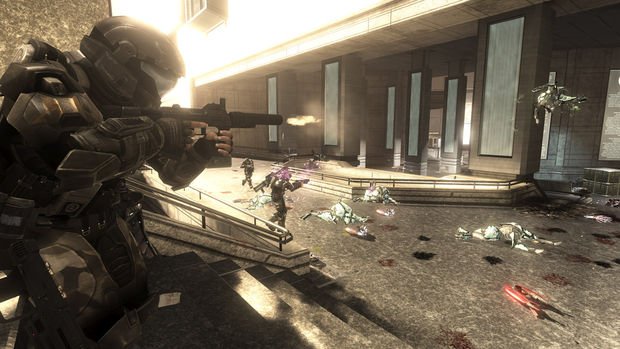 First off, health packs. We’re used to playing as a superhuman or alien. We’ve been spoiled with shields, regeneration, and the ability to take a brute shot in the chest and still get up. But in ODST everything changes — you’re an above average human, not superhuman, and I don’t know if anyone is going to be able to avoid underestimating how much a difference this truly makes.

Suddenly the Master Chief “tactics” no longer apply. You can’t just run out with a sword and take down Grunts one by one, knowing your shields will take the peripheral damage. You can’t let grenades scrape you as they fly by. You can’t take chances. Well, unless you want to hear Fillion’s impressions of a dead and dying ODST (which is sort of exciting). But then you use up one of your team’s precious shared lives — you start with seven in the first round. That’s less than two deaths for each of you, remember, and you’d better hope it doesn’t happen before the Chieftains show up.

Let’s back up and break it down, in case you haven’t yet read anything about the structure. We were shown three maps (all of which are shown in the gallery so be sure to check them out). You always spawn in a covered area with a health pack each and artillery, and the game gives you enough time to collect your thoughts before sending in the dropships. 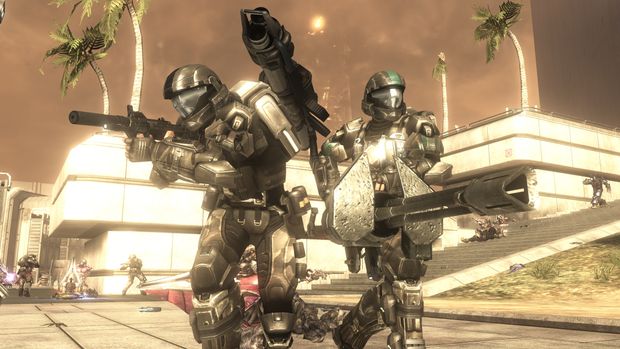 As the first wave hits, you attempt to pick off as many enemies as possible from far away. Depending on what wave of which round you’re on, Skulls are activated, starting with “Tough Luck” and adding others (“Catch,” “Black Eye,” “Tilt,” “Famine”) as the game progresses. Each round has five waves, and as you eliminate a wave you get a breather to dash out and collect dropped weapons (brutal when “Famine’ is on), before the screen flashes the word “REINFORCEMENTS,” and the next dropship comes in. Or you hear sirens indicating that they’re about to pour through the darkened doorways around you. Activate VISR when you hear those, and thank me later for telling you what the sirens were about. No one told us. SUPPLIIIEES!

There are always five waves to a round, and the fifth is always a wave of Chieftains. You’ll know it’s coming when you hear the music start; it’s meant to get your blood pumping. Pay attention to the side of the screen — if “Tilt” is on, you’re going to need to run around, probably flailing, looking for a plasma weapon that’ll penetrate shields. You’re rewarded with health packs and refreshed respawn meters at the end of the fifth wave in a round. Or so we were told.

As I stood behind a team that was about to finish up their last Chieftain, Lars quickly called everyone over to witness what was going to be the first testing team to pass round 1 on heroic. Just as the shoulders relaxed and they remembered to breathe, a giant grin showed up on Lars’s pretty little sadistic face and each of the four screens flashed the words “BONUS ROUND,” with a sixty second counter ticking away. All Skulls were immediately highlighted and each player scrambled to grab their controllers as a flood of Covenant slaughtered them in record time. Remember, the point of “Firefight” is to get the highest score possible, so while the Bonus Round might not last long, the points are worth it. Just save a grenade or two for the kill, and enjoy the mayhem. You won’t last long anyway. 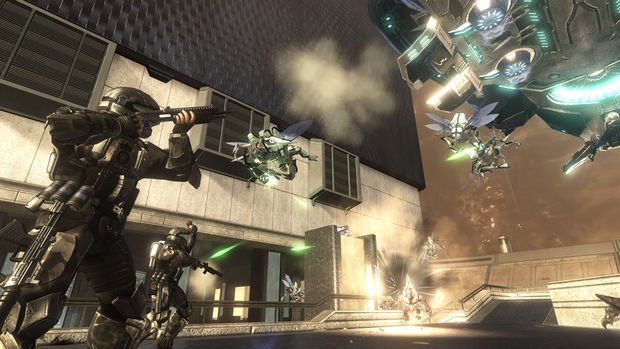 “Firefight,” of course, utilizes the new weapons and equipment that ODST offers. Depending on the map you’re working on, you might have to activate the fancy new night vision. The textures in VISR mode make a huge difference — things are outlined in green friendly lines and red baddie lines for your convenience, and it makes stealth much easier. And don’t underestimate the new M6 pistol. That thing packs heat — definitely the most useful of any of the guns that I picked up, and has the real potential to be my favorite firearm in ODST, period. If only we could dual wield the things as ODSTs, I might have a pistolgasm.

Overall, the experience looks amazing, and I’m confident I’d say that even if I weren’t a Bungie Fangirl. “Firefight” has a completely different feel to it than anything else in the Halo series. So many times I smiled as I heard a shift in the room’s tone. During “Team Slayer” earlier in the day, the shouts were often aggressive and in context to a beat down between players, highly competitive. But it was amazing to hear the sighs of relief and how often the words “thank you” were thrown around during “Firefight.”

You’re really there to watch each other’s backs, and most of your close calls will end well because of team members. It allows players of varying skill level to work together towards a greater goal, which is a huge difference from the “pwning noobs” attitude I’ve encountered thus far. Hell, even I saved the team once or twice, and I can’t explain how good it felt to be last man standing and take out that remaining Jackal, reviving my team as I did so – even if I was the worst player in the room. It sort of gave me the warm fuzzies, I have to admit. And that on its own is special.

“Firefight” and Halo: ODST ship on September 22nd. I’ll be there.