So I had to scrap the first draft of my Grand Theft Auto: Chinatown Wars preview that a wrote a week or two ago. It wasn’t a bad preview, really. I thought it was written fairly well, contained all of the relevant game information, and some quick snippets of personal impressions.

The problem was, it was too God damned long. Like, L. Ron Hubbard’s Mission Earth long. You see, Chinatown Wars is a big game, easily one of the biggest games on the Nintendo DS. Built from the ground up for little handheld by Rockstar Leeds (who did the Liberty City and Vice City Stories games for the PlayStaion Portable), Chinatown Wars has more stuff going on than I had originally anticipated.

A few weeks back, I had a chance to sit down with the game for about an hour. And while I have a feeling I’ve barely scratched the surface, I’ve seen enough to leave me impressed. Hit the jump details and impressions. 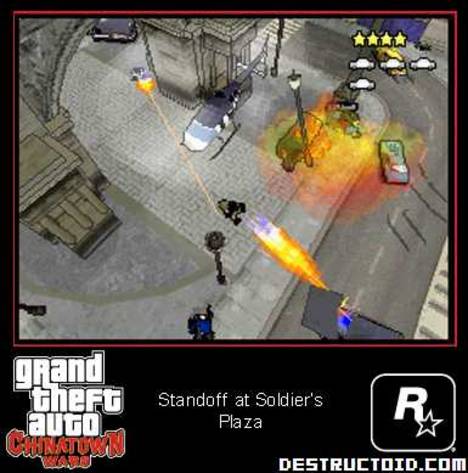 Chinatown Wars is the story of Huang Lee, a spoiled young brat and a member of the Chinese Triad crime syndicate. When his father is murdered, Huang travels from Hong Kong to Liberty City to deliver a family heirloom, a questionable symbol of family honor — a sword. It’s not long after arriving at Francis International Airport that he’s ambushed, robbed of the sword at gunpoint and then left for dead.

Here is where the game begins, with Huang injured in an automobile that is sinking in Liberty City’s Humboldt River. It’s also the first time you’ll put the Nintendo DS touch-screen put to use, tapping the bottom screen — a view from the inside of the sinking car — to shatter the glass of the windshield and escape.

Once you swim to safety, you’ll see that the game has a similar feel to the early, top-down-style Grand Theft Auto games. This initial impression is close, but not right on target. You’ll be moving Huang about on car and foot (using the d-pad and face buttons) from a 90 degree angle, but unlike the older titles, the game is entirely modeled in 3D. Liberty City is living and breathing, with 3D objects, vehicles and pedestrians moving about and doing their thing. There’s even changing weather effects, and a 24-hour day/night cycle that casts dynamic shadows on everything you see on screen.

The game looks great, even on the small DS screens, but doesn’t look like the Liberty City you’ve come to know. It has a more cartoon-style feel, hand-drawn with hard lines around objects and characters that make them pop on out in the tiny viewing area. But it will feel familiar to anyone who has played Grand Theft Auto IV, and has navigated its streets. Dukes, Bohan, Broker, Algonquin, and Happiness Island — they’re all here, with a scale that’s comparable to what you’re already familiar with. 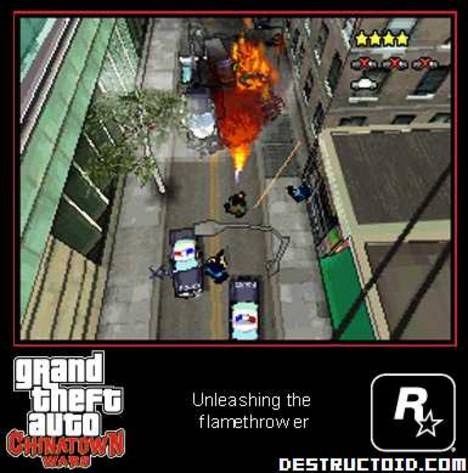 The game’s structure is Grand Theft Auto through and through, with the typical missions that you’ve come to expect. Go here, kill this guys. Pick up and drive this guy here. Go here and blow this up. It’s standard issue for the series, to be sure, but Rockstar Leeds have taken quite a few steps to make it feel fresh and different for the Nintendo DS.

For one, the driving mechanic is tweaked a bit for the handheld. It has a more arcade-style feel, and the game will even lock on to a rail to make navigating through traffic a bit easier. (You can, of course, go off the rail and smash into cars … but more on that later.) There’s even a new burnout maneuver, done by holding the emergency break and spinning out before you boost forward leaving a trail of fire behind you. And while I didn’t see or use any, I’m told that boats and motorcycles will also be drivable.

On the subject of driving, get used to it — you’re going to need to be proficient if you’re going to evade the fuzz. The police evasion system in Chinatown Wars is unique, unlike it’s been in any Grand Theft Auto game before it. Once in the sights of the law, players will now have to disable police vehicles that ramming into them at full speed. Taking out the vehicles lowers the wanted level, but you’ll have to be careful — in one mission I rammed a police car into a side rail, causing me to disable the vehicle … which then exploded. My wanted level went up considerably, considering I had just killed an officer.

On foot gameplay is also more frantic and arcade-like, and in the few shootouts I engaged in felt more like Smash TV than any Grand Theft Auto I had ever played. With this in mind, Ramapage missions are back, and look to play a decent role in Chinatown Wars but within missions and as side-games. Chinatown Wars features a target system, which was as simple as facing an enemy (or a group of enemies) and firing. 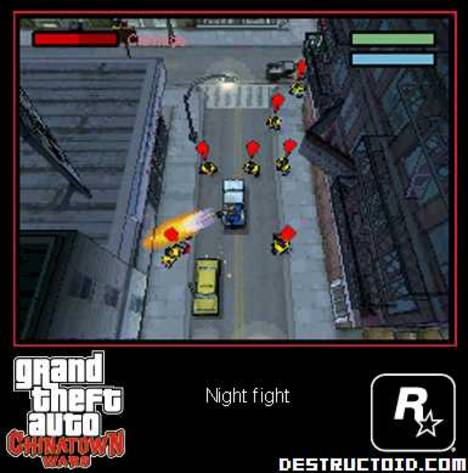 Chinatown Wars uses the touch-screen in a number of ways, the least of which is the interactive PDA. You’ll be able to receive mails, send mails, see and navigate via a GPS, keep stats, and more. It’s always visible, and it seems like it will always be useful, whether you’re looking for a new mission or activity, or if you’re already on one. Think Niko Bellic’s cell phone from Grand Theft Auto IV, only enhanced for the Nintendo DS.

But touch-screen elements are sprinkled all over Chinatown Wars, and while sometimes obviously, also come up in the most unlikely of places. Hot-wiring a car, for instance, seems like a given — you use the DS stylus to turn some bolts, move some wires, and you’re on your way. There’s even a Simon-like mini-game that has you arming a bomb.

But I was taken aback when an assassination mission (called “One Shot, One Kill”) found me using the DS stylus to slide open a suit case that was filled with parts for a sniper rifle. I then had to drag the parts of the rifle into place, screwing the barrel into place (with a circular motion), and even snapping in and locking the scope into position. It felt cool and was completely unexpected, another layer added to the all-too-typical “go here and snipe this dude” missions we’ve become familiar with. 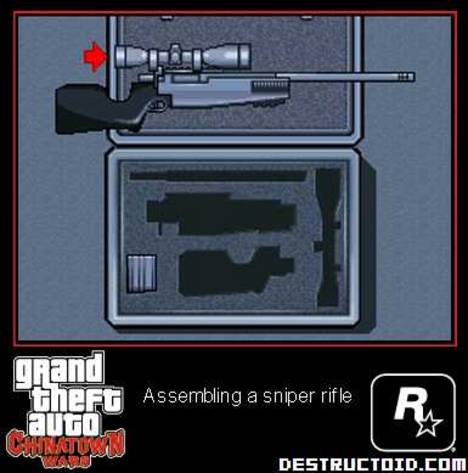 There’s other stuff that’s new to Chinatown Wars as well, like a replayable mission structure that let’s you go back to completed missions to try to earn a better score, a first for the series. You’ll also be able to sync stats and more with Rockstar’s online Social Club, and share in-game items, weapons, and GPS locations with your friends wirelessly.

And I haven’t even talked about the in-game economy, better known to the world as the much-talked-about “drug dealing mini-game.” It’s like a big, fancier version of the popular Dope Wars game, with the player dealing six different drugs that have fluctuating values. You can meet with buyers, you can meet with other dealers.

Prices vary from area to area, so you’ll have to pick and choose your deals wisely. There’s also the presence of 100 police security cameras through Liberty City, which affects drug pricing as well. This meta-game can earn the player more money — it will be the main way of getting cash throughout your adventure — but is not necessary for story completion. On the flip side, the game can be played on its own, independent of the main story. Considering the popularity of less sophisticated versions of a similar game on cell phones, it seems like you could lose more than a few hours dealing dope.

OK, so I think you get it; Chinatown Wars looks like it’s going to be no joke. The interesting mix of modern Grand Theft Auto elements with the classic, as well as some brand new DS functionality, make it an irresistible package for those with even a passing interest in the series.

With that said, don’t be surprised if Grand Theft Auto: Chinatown Wars helps get the DS into the hands of a few players who haven’t already taken the plunge. There’s really nothing like it on the handheld so far, and even in the unfinished state I saw it in, it was already looking like a massively fun (and violent) timesink.