Last week Eidos had me out to their Montreal studios to get a better look at their upcoming title, Deus Ex: Human Revolution. One of the most impressive aspects of the game is how open-ended it is. For example, there’s no set way to clear an objective or get through a map. It’s up to the player to find any one of the multiple solutions, which leads to another scenario that is open in the same way, leading up to any one of the multiple endings. Talk about non-linear!

What’s really cool is that Deus Ex: Human Revolution can be played in your own particular style. If you’re a gun-shooting badass, go in full force, guns-a-blazin’. If you want to talk your way through, you can try. If you’re a wuss like me you can sneak around and avoid conflict. I was told that you can go through the entire game without fighting, save for boss conflicts. This is game is a wuss’ dream.

It’s one thing to hear how a new title is attempting to be the end-all multisolution, open-ended game, but it’s another to actually see it in action. I had the privilege of seeing one particular conflict played three different ways. Mind you, this was just three of the many ways you could go about it. What’s wonderful is that you’re free to mix and match, change up your pace and basically do whatever you want to get your job done. Seeing the creativity allowed in Human Revolution was a real eye opener.

The mission I saw was set about two hours into the game. Adam Jensen is tasked with pulling off a particularly difficult heist in Detroit’s police station: nabbing a neural hub from the brain of a dead body. This means that he has to get into the station, past the police, into the morgue and into this guys brain…and then get out alive.

How do you get in and get out of a protected place in most games? Go in with guns up, blasting anyone that gets in the way. That’s how it went down in this first play-through. Jensen walks right into the station, past the front desk and encounters the restricted area, where a cop says that he has to back off. Ignoring him, we go right in.

Of course, the entire police force is called into action, and is out to get you. There was gunning, stabbing and even the using of a fax machine as rolling, dynamic cover. Fire was coming from everywhere, but we were taking out cops left and right. The goal — the morgue — is on a different floor, so Jensen uses an X-ray Augmentation to see through the floor to plan out his next move. With the lay of the land in mind, and the element of surprise on his side, we pull out a revolver and enhance the weapon to add explosive rounds to the shots. Nice. Now on the proper floor, we’re taking cover behind desks and throwing grenades. When we finally make it to the morgue’s entrance, it is locked. No worries; we use weapon enhancement once again, using a mine template to attach a mine to a frag grenade. The door goes down easy and the neural hub is retrieved. This not-so-subtle frontal assault was a lot of fun, perfect for those willing to work for it.

But let’s say that you’re more sly than strong… 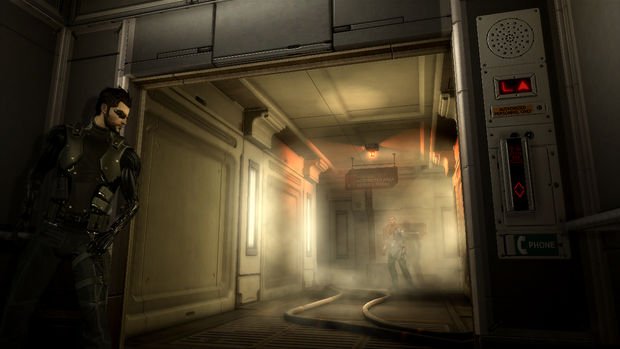 Instead of shooting, we tried talking our way in this time around. As before, Jensen enters the station, encounters the protected door and gets run off by the guard cop. This takes him back to the office front desk, where he encounters an old friend — or someone that used to be an old friend. Through the dialogue we find out that the two have a history, and now this cop, Haas, is stuck with desk duty and guilt for killing a kid in earlier days.

Haas is upset because the very first thing Jensen does after all these years is ask for a favor. Through very convincing dialogue, Jensen is able to talk Haas down from anger. The game presents you with options that let you guide the conversation. In this case, the dialogue stopped to let us decide between Crush, Absolve, or Plead options. Our path had Jensen promising to take care of Haas. He also promised to put the past behind and move on. All this fancy talking earned us a “silver tongue” merit and entry into the front door, no questions asked.

What was really neat is how the entire mood changed from the previous play. Where we were hiding behind fax machines to take cover from fire before we were now able to freely walk, talking to policemen and listening to conversations. More story elements were easily uncovered, and there was even an opportunity to get ahold of a special weapon that would have otherwise been inaccessible through exploration. Being able to freely move about the three floors of the police station was a completely different experience from before.

The morgue was not locked time time around, and inside a coroner greeted Jensen, assuming he was supposed to be there. The coroner even gives Jensen a detailed report, revealing more story elements that we missed from running and gunning! 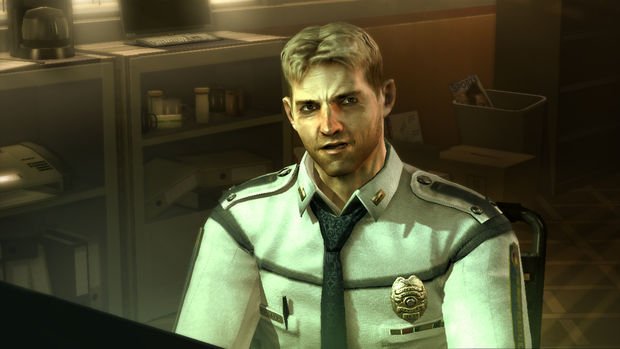 There’s always another way, and this time it was avoidance. We skipped the station’s front door and went around back. There’s armed guards, but we waited for them to pass. Using acquired strength and jump Augmentations, we pushed over a trash bin and scaled a fence. I was told that had we not had those augmentations, there were other ways through to the back of the station. Around back we found a ladder that went up to another floor in the building. It was locked, so we had to hack it.

Hacking is like a puzzle game where you’re trying to capture nodes without being detected by a subroutine. Our hacking Augmentation wasn’t high enough to take this challenge on, so we put experience points into it to raise it. Once inside, we used stealth to proceed. The X-ray Augmentation let us peek at what’s ahead, and the cloaking Augmentation let us go by undetected. It seems that the cloaking only hides Jensen visually — he can still be heard. We moved past two guards and snuck around a busy police office, listening in to conversations, stealing healing items and pain killers. Near the morgue we snuck behind a guard and took him out from behind, using non-lethal means. We used his body to defeat the security on the door and walked inside. Leaving, we used a sewer exit. No one ever saw or heard us. 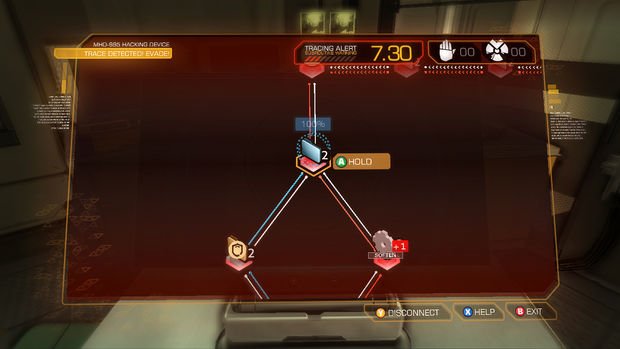 These three totally different ways of playing Deus Ex: Human Revolution are not set in stone. You could easily mix and match styles at your leisure. There’s nothing that tells you that you have to do anything in any one way, and seeing that for myself really helped me to understand how open-ended this game is, as well as how much work they put into it. I found out later that there were more paths and solutions that we never saw.

What’s most interesting is that your choices will affect how the game ends. Your choices actually shape the actions of the other key characters in the story. The end result is a game that supplies you with endless choices, letting you experience its story in a way that speaks to you.