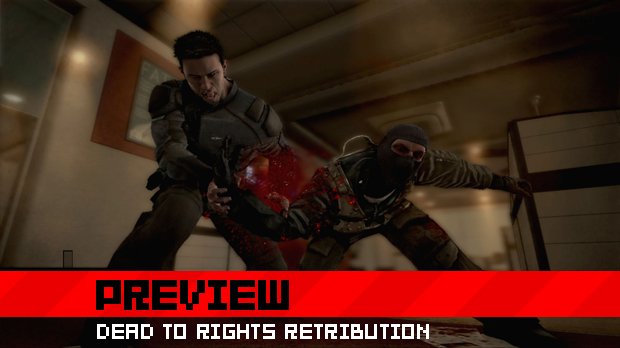 Remember back in the day when Max Payne was released? That game sparked a ton of clone games, one of which was Dead to Rights. The major difference between those two games was that Dead to Rights was the only one where you had a dog sidekick and that there was a stripping mini-game. Remember that? Remember those boobs? Those disgusting last-gen quality boobies? Remember?!

Well, as you found out a couple of months back, Dead to Rights is making a comeback on consoles. Dead to Rights Retribution is a reimagining of the series as it’s starting from the beginning again. Just pretend all the older games never existed.

Take a slow motion dive over the jump to find out what Dead to Rights Retribution is all about and to see the first gameplay footage of the game.

Welcome back to Grant City. The city isn’t what it used to be and has gone to Hell due to all the crime and evil jerks. You play as Vice cop Jack as he tries to clean up the streets of Grant City.

One of the first major changes to the franchise is the focus on hand-to-hand combat rather than the heavy shooting gameplay of Retribution’s predecessor. The combat system allows players to perform combos and they can attack multiple enemies at once. If you get surrounded by a group of enemies, you’ll be able to beat up a guy, quickly focus on another person in the group to knock him back and then go back to the guy you were just beating up to finish him off. Enemies won’t just stand around for their turn as you’re beating up their buddy, they will all attack as they see fit so players need to shift from enemy to enemy on the fly to stand a chance.

Players can perform devastating finishers on their enemies depending on the combos they perform. So for instance, if the player performs a punch, punch, kick, punch, Jack could finish of an enemy by knocking him on the ground and sticking his shotgun into the guy’s face. It’s kind of like performing a Hadouken in Street Fighter if you replace the energy ball with bullets.

There is a heavy focus on hand-to-hand combat, but that doesn’t mean there won’t be any guns. You’ll be able to pick up weapons such as pistols and shotguns and use them until all the ammo is gone. Once the gun is empty, Jack will automatically toss the gun away. Players can also use guns as melee weapons and disarm weapons from bad guys. Enemies can also disarm Jack of his fire arm.

Slow motion is back in Retribution as well. It isn’t going to as crazy as it was in the original, but it holds the same purpose basically. Everything including Jack slows down giving players the chance to react accordingly to an overwhelming situation for a short period of time.

The last weapon shown in Jack’s arsenal is Shadow, the dog (not the hedgehog). Through most of the game, Shadow will be Jack’s wing man assisting him in battle. Players can command jack to attack someone, fetch weapons and more. Around the seventh level, Jack gets really messed up and can’t really fight anymore. So Shadow steps up and players take control of the dog.

The main goal in this level is to protect Jack. The visuals change style and everything turns to black and blue (like the Underworld movie). In the demo play through, we see Shadow run ahead of his master and take cover behind some crates. Enemies are outlined in red and Shadow can see them through any object wherever they are in the level.

Enemies patrol in groups so it’s important to kill enemies silently. Two guards are walking towards Jack’s hiding spot and one of them happens to walk right past Shadow’s hiding spot. Shadow immediately jumps up at the guard, takes him down and rips the guy’s neck open. Shadow then goes to the other guy, takes him down and clamps his mouth over the guy’s face, silently suffocating him to death.

Shadow can be sneaky, but he can also be loud and crazy. Shadow can run at crazy speeds and knock down enemies like a bowling ball knocking over bowling pins. Being loud attracts attention though which is a bad thing for Jack. If an enemy gets too close to Jack’s position, Shadow can distract enemies by barking.

From what I saw, I really dug playing as Shadow. The main gameplay however didn’t really wow me. It reminded me of Stranglehold, and that’s not a good thing.

For more on the game, check out the trailer below showing the first gameplay footage for Dead to Rights Retribution.