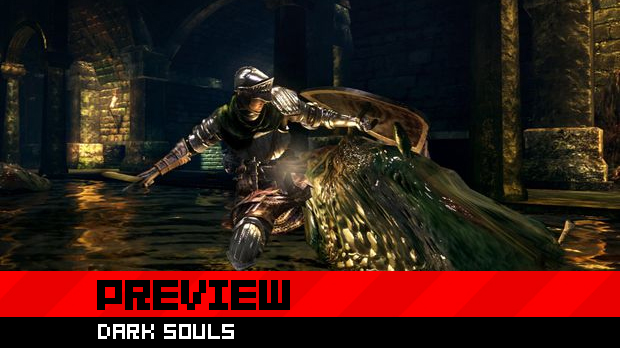 As you might have read, Namco Bandai’s been murmuring a lot about Dark Souls lately. In the past few days, there have been a bunch of screenshots and a new trailer. In addition to the news coming from their annual Level Up press event, they also invited me, Max Scoville, star Destructoid reporter, to see some gameplay.

Okay, I’m not really a star reporter, but Hamza was busy that day, so I went instead. 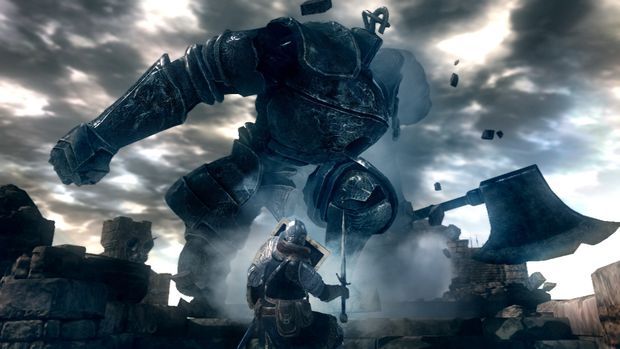 Dark Souls isn’t a sequel to 2009’s Demon’s Souls, but it’s a “spiritual successor.” Both games were developed by From Software, but the publishing end of things gets confusing. Demon’s Souls was published in Japan by Sony Computer Entertainment, in North America by Atlus, and in Europe by Namco Bandai Games. For Dark Souls, From Software is publishing it in Japan, and Namco Bandai’s taking care of it everywhere else.

No one’s said anything about it, but it wouldn’t surprise me if Dark Souls being a “spiritual successor” and not a direct sequel to Demon’s Souls had something to do with copyrights or contracts on account of the musical chairs routine going on behind the scenes. Of course, that’s just wild speculation and someone in PR might’ve just really liked the sound of “spiritual successor.” I mean, souls are spiritual, and both games are about souls, so that works. The good news from all of this is that Dark Souls won’t just be a PS3 exclusive, it’ll be available for Xbox 360 as well. 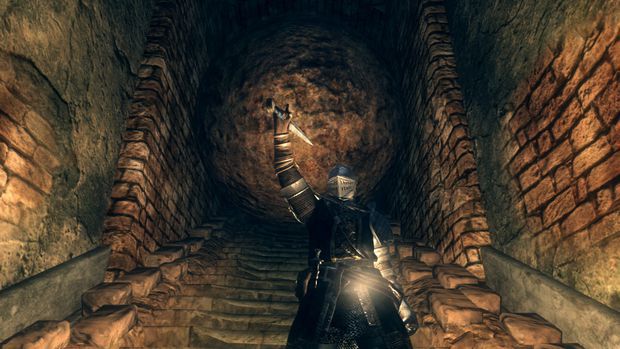 When sitting down to see a demo of Dark Souls, one of the first things I noticed was the color palette. Our hero — I’d say “my character,” but I was watching someone else play — was standing outside a castle. It was daytime, on what looked like a sunny autumn afternoon. Our hero was wearing a gold helmet and slightly purple armor adorned with some small gems. Compared to everything I’ve seen in Demon Soul’s, it’s a pretty noticeable change. It’s not offensively colorful, like something made by Blizzard, but the palette is a little less muddy than the one in the previous game. 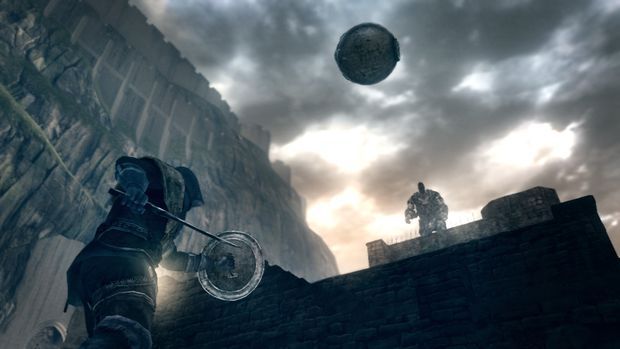 Of course, the game is “Dark Souls,” not “Sun-Dappled Afternoon Courtyard Souls,” so our hero proceeded into the fortress. Immediately upon entering, he stepped on a trick tile on the floor which caused a hole in the wall to pelt forth a volley of darts. The title of this area was Sen’s Fortress. When I asked the Namco Bandai guys if that was the official name, they said “Eh, probably. We’ve just been calling it the ‘castle of traps.’” Makes sense.

After dodging some arrows, a large snake-headed man with a sword and shield emerged from behind a pillar and attacked our hero. A bit of battle ensued, but ended abruptly after a well-timed parry and repulse attack. The cue for this is a little chiming sound. If you listen for it, and time your attack right, you can totally mess up an enemy by scoring a critical hit. 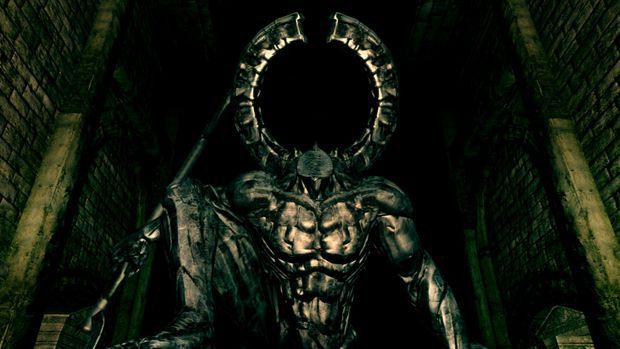 Even though I was watching a guy from Namco Bandai playing the game, he was only human, and he died a few times. The harsh bold text appearing on screen still reads “YOU DIED” which is hilarious in a cruel sort of way. Souls are still the in-game currency, and after dying, you will still lose all of them. They can be retrieved, though. You just have to return to where you died. If this happens at the bottom of a deep pit, this may prove to be impossible. The lesson learned here is “don’t fall into deep pits.”

Conversely, falling into some pits can prove to be worthwhile. Our hero was knocked off a ledge at one point. I was expecting sudden death, because that usually what happens after falling into dark pits in video games. Instead, our hero flopped down into about six inches of water, his health bar diminished to a tiny sliver. After healing himself, our hero set off on further exploration. 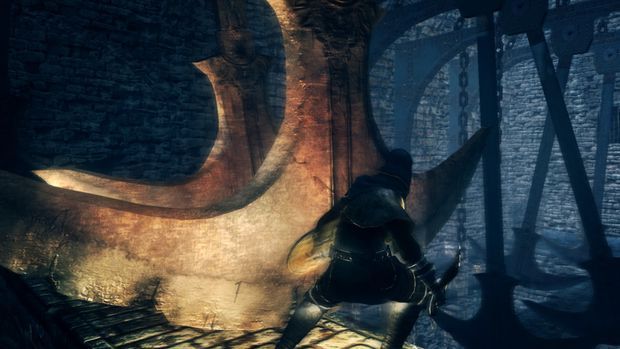 Poking around at the bottom of this pit, our hero found a couple of corpses, each holding items. Around one corner, we saw a large dark figure sitting in the water. Upon approaching, it got to its… Well, it got to its foot. It was a massive one-legged minotaur, which hobbled around trying to kill our hero with an axe.

Dark Souls seems to combine the thrill of discovering secret areas and shortcuts with the suspense of exploring unfamiliar territory. Off the top of my head, I can’t think of a game that better applies open-world exploration with indoor environments. The one-legged minotaur was not a boss, and it didn’t seem as though fighting him was necessary to progress in the game. His presence at the bottom of this dank pit was not explained through some long-winded backstory — he was a monster, in a pit, who you got to fight. It’s that kind of a game.

Dark Souls isn’t all inside a castle. I was told that other levels include a dark — possibly haunted or evil — forest, ice caverns, and the ruins of a village. The village and forest both piqued my interest, since those environments could offer much less rigid exploration than the dungeons and corridors that have been the norm for both games. 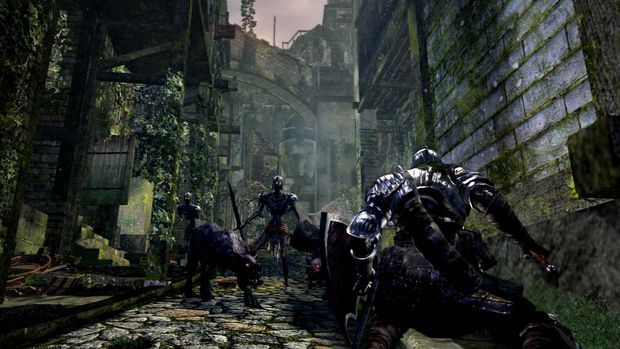 Linear gameplay is not always a bad thing, but considering the amount of creative freedom game designers have nowadays, it seems overused. Dark Souls does not have waypoints or bright yellow objective markers. It doesn’t have some fairy shouting “Look! Listen!” and for that, I applaud it. At the same time, it’s also not an easy game. It has rules and it has challenges. Based on what I’ve seen, it looks like an old school game that takes advantage of current technology, and this is done without dumbing itself down or putting on airs. 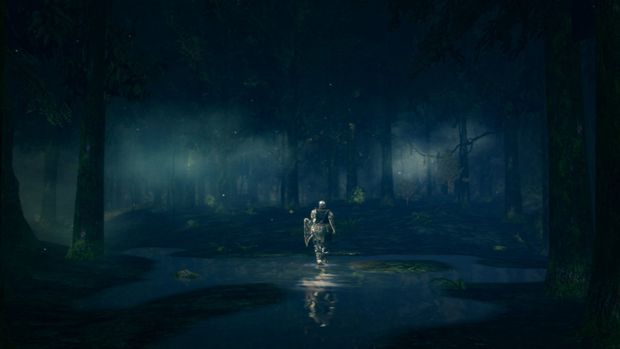 When I asked about the plot of Dark Souls, I was given a very brief summary. You start in a prison, and your first task is breaking out. You’ve been locked up for being undead. Not like a zombie or vampire, but as someone who cannot die in a conventional sense. Every time you’re killed, you return as something slightly less human. I don’t know if this affects gameplay in any sense, aside from the fact that you WILL die repeatedly. Regardless, as an undead fugitive, you decide to go explore the “blighted realms of the north.” And kill monsters, duh.

Speaking of monsters, the monsters look incredible. This is coming from someone who’s a big monster snob, too. At one point, we saw a treasure chest. Our hero opened it, and was greeted with pointed teeth and a giant disgusting tongue. The treasure chest sprouted slender arms and legs and stomped around trying to bite and kick our hero. Imagine a cross between a normal-looking treasure chest and Violator from Spawn. Or maybe that guy from that one Aphex Twin video. Ugh. Genuinely creepy. Of course, since this guy was a treasure chest, killing him rewarded us with a big pile of loot. 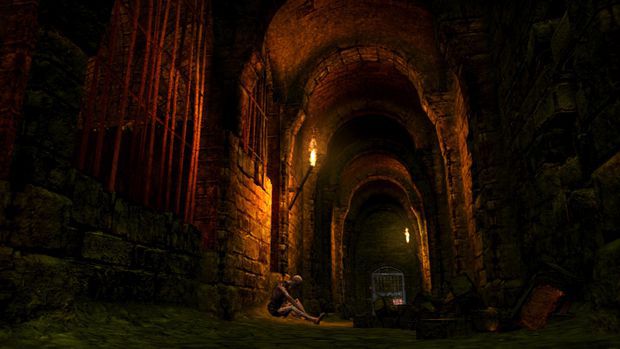 The demo I was given reminded me a lot of the first Castlevania. Being plopped down in front of a castle. No briefing, no exposition, just the suggestion to go forward and kill the bad guys. How do you know who the bad guys are? Well, they’re monsters, and they’re trying to kill you. When they kill you, you die, and you have to start over. It’s pretty simple.

It doesn’t look as though Dark Souls has made any crazy changes to the gameplay from Demon’s Souls. Given the reception of the previous game, that probably isn’t a terrible thing. Dark Souls is still a third-person action RPG about fighting monsters, collecting souls, and getting your ass kicked repeatedly in the process. You start out by creating a character, and the class you choose isn’t something you’re locked into. Upgrades and skills are purchased with souls, and there’s no big fat “CONGRATS! LEVEL UP!” being waved in your face. 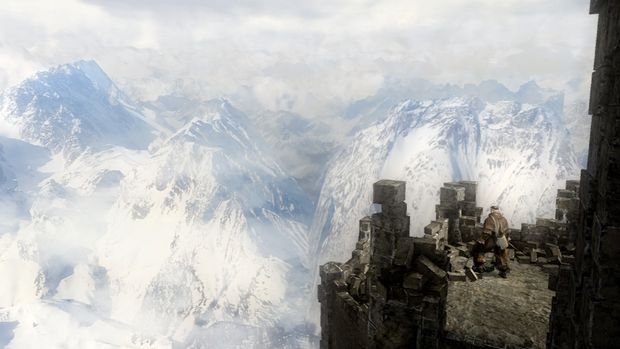 Namco Bandai has made no secret that Dark Souls will allegedly be harder than its predecessor. This might scare off some people, since the difficulty seemed to be the make-or-break factor before. If you enjoyed the first game, this looks like more of the same, but bigger and badder. If you’re bad at video games, and if you’ve never played Demon’s Souls, this could be the kind of game that makes you cry like a little girl.