Coming right behind Atlus’ official announcement of a US release for their first HD game, Catherine, is our preview of the Japanese version, which was just released a few weeks ago.

Buckle in, as I have a lot to say.

Read on for our preview of Catherine.

First impression was not great:

I’m sure my story with Catherine is similar to yours, at least starting off. We heard there was a new PS3 and Xbox 360 title from Atlus, and we heard it was coming from the Persona team. Excited? Yes. Then we saw it and how sexy it looked. Then the Japanese hype machine started and we all spun out into a fit. And then that day hit when we saw that Catherine was a puzzle game at its core. And here’s where we probably parted ways. I was very disappointed. 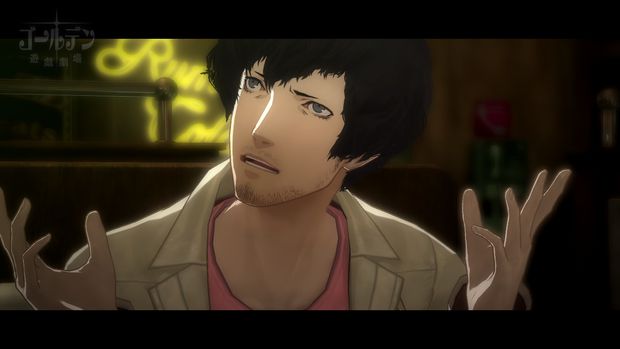 WTF? This is a puzzle game?!

I really wanted Catherine to be an RPG of some sort that weaved in dating elements, but they didn’t make this game for me. I kind of got over that, got my launch day copy of Catherine, and played it for just long enough to be discouraged that it wasn’t an RPG. I played it just long enough to remind myself that I am not good at action-puzzle type games. And I honestly didn’t pick it up for another week. I bitched that it was too hard to everyone that asked about it, and got in an extra dig by complaining that it wasn’t really as sexy as they marketed it to be. Like a big baby.

But my sense of duty kicked in, and my inbox was hit with countless requests for a preview, so I really dug into it. Now that I’ve put some real time into it (I’m probably half way through it), I can say that I’m really enjoying it. I’ve completely changed my mind. This is a very fun game. If you can get over that it’s a difficult puzzle game, and that it’s really not as sexy as Atlus Japan marketed it to be, then you’ll also dig it.

Catherine is very easily spoiled, so we’ll stick to the basic framework of the story. You play as a guy named Vincent. Vince has a steady girl that is ready for commitment, but he’s not quite. And then there’s this other girl that quite literally falls into Vince’s lap. She’s just as attractive as his steady girl, but she’s a bit more fun, and a bit less bitchy. Decisions, decisions. This in itself would be a terrible situation to be in, but it gets worse. People have been dying in their sleep, says the local news, and the rumor is that nightmares cause this death. What sucks for Vincent is that on top of his relationship troubles he too has been having some really strange nightmares. 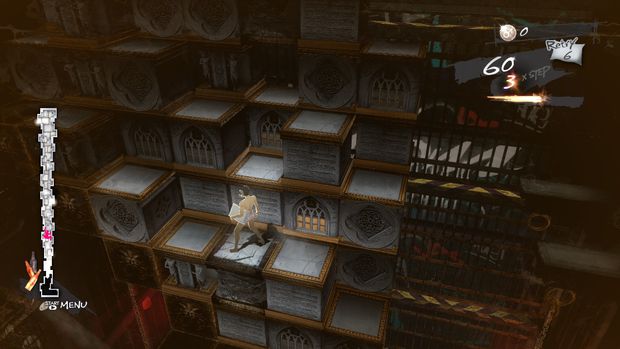 The core gameplay of Catherine is a climbing-style action puzzle. The reason you climb is for survival, as if to climb out of a dream. Sorry, but revealing more would be a spoiler. Let’s just say that you dream (or have nightmares) frequently. In these nightmares you’ll start at the bottom of a pile of cubes, and you’ll have to use various skills to negotiate these cutes to make it to the top. It starts out as a race against time, as the cubes under foot will begin to fall. Later, it becomes quite a bit more urgent as something starts to chase you up the pile.

Those that remember arcade classic Q*bert will see some similarities, but Catherine‘s gameplay is much more complex. You’ll actually pull and push these cubes to create pathways where you can climb. With Vincent’s limitation of only being able to climb the height of one cube, you’ll need to push, pull, crawl and hang off edges to find the best way up. Each stage is actually a set, designed puzzle that you’ll have to figure out for yourself. The designers really worked to make these challenging, so much so that even the first couple require you to put on your thinking cap. 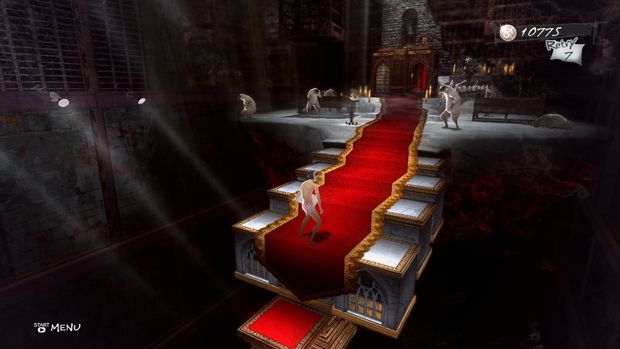 It’s very easy to get frustrated with these puzzles. The watercooler talk these past couple of weeks lets me know that I’m not alone. Frantic climbing was not fun for me at first, but it was the repeated deaths that really put me off. What I eventually learned is that I needed to broaden my skill set for climbing these cubes. The game does a really great job of educating players on how to tackle obstacles. My problem is that I wasn’t paying enough attention. When I really took to heart what I was being told, I started to succeed and have fun. While the puzzles have become progressively more difficult, I find that I’m still able to cope with them. I don’t want to spoil any story elements, but I do have a bit of advice that I’ll put in the most general terms: You need to talk to everybody. Or…everything. This is the key to succeeding. I’ve since learned things that have actually made me slap my head. “OH!”

Let me be clear about one thing: The puzzle element is really fun. Forget what I said on Twitter. It wasn’t for me at first, but the strategy becomes so deep that I’m kind of addicted to it. It really keeps me coming back. But so does the story.

When you’re not puzzle gaming:

Fans of how Atlus spins a story will love Catherine. Even if you hate the puzzle play, as I did at first, the story is so great that it easily keeps you going. Again, the story is very easily spoiled, so I recommend that you steer clear of other previews, videos or anything else that isn’t sent out by Atlus USA proper. Much of your enjoyment will come out of gradually seeing how shitty Vincent’s life can get. This guy has the best and worst luck ever and it’s a joy to see how it all unfolds. 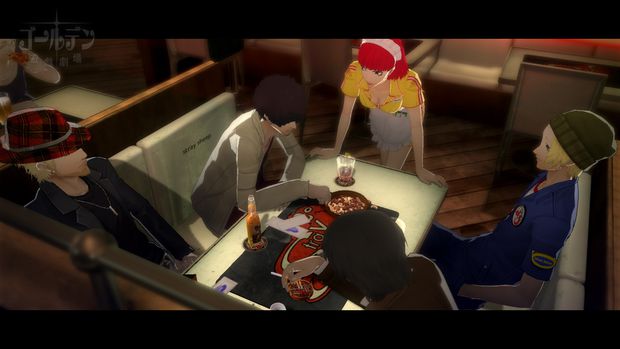 You do get to explore, talk to people, uncover sub stories, develop characters and all the other great stuff that made you love the Persona games and other Shin Megami Tensei titles. Just because they tried something new with the puzzle game play doesn’t mean that Atlus suddenly forgot how to do this stuff well. As a crazed fan of the Persona series I found myself fully satisfied with the story and relationship elements in Catherine.

It gets a bit deeper when you consider that you’re often asked to make choices throughout the game. Some of them are straight moral choices, but others are simply matters of preference. S or M? Boy or Girl? Anything’s game. You’ll answer questions in person, on the phone, over email, and in your nightmares.  Each answer you give figures into the ending in ways you likely won’t fully know until the game ends. The only gauge you have is a meter that swings back and forth with each answer. Even the game says that you won’t understand until later.

Production values out the ass:

The dialogue is fantastic, the music is a new high point for composer Shoji Meguro, and the in-game cutscenes mixed with Studio 4C’s animation are of an insane quality. The combination makes for one of the most amazing current gen expereinces, and certainly the best that Atlus has ever cranked out. And that’s saying a lot. 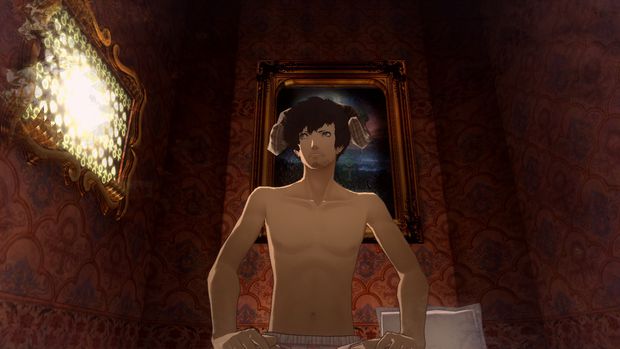 He’s not pooping, but he is straining

Beyond the face value stuff, Catherine just oozes style and polish. Everything is stylized and very original looking, from the characters to the locales. The facial and body animation is outstanding in the non-puzzle scenes, making the characters really easy to get into. The whole package is a visual treat — Atlus really put some work into this one.

There’s plenty of ear candy as well. Atlus in-house composer, Shoji Meguro, has been busy lately, but he’s not burnt out. This is probably his best score yet. The action tunes are satisfying and the mystical, dark ones show that he’s learned so much over the years. He also has a bit of fun with some of the pieces. He works the “Funeral March” song over a jazzy beat to underscore situations where relations with girls aren’t going as well. I’ve purchased the soundtrack CD and have been enjoying it away from the game. It’s that good. 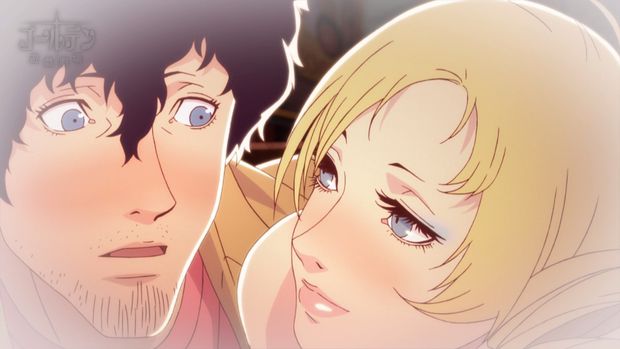 I haven’t finished the game yet, but I do have a few issues with the game.

One of my biggest may be nothing to you, unless you also become motion sick from shaking screens. I feel like it was very, very poor choice to have the entire screen shake when the boss approaches. I imagine the idea being thrown out at a board meeting, and someone approved it. Then some programmer went nuts. It’s way too much. It’s terribly disorienting, so much so that it makes those instances stop being fun. The excessive screen shaking in boss battles actually pulls me out of the game for a second. You’ll be frantically climbing only to find that you’re suddenly so dizzy that you have to look away from the screen. And then you die. I feel so strongly about this that I’d call it a major fault that has to be addressed. Thankfully you’ll only encounter this in boss battles, and it only happens a few times during those battles. Toying with the gamer is fine, but making a scene disorienting and dizzying makes it the opposite of fun. 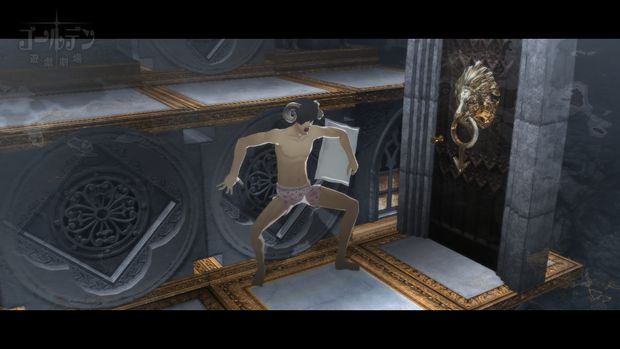 My only other real gripe is that the orientation of control when climbing can sometimes get turned around with the camera. The camera can stay locked in an unmoved position for most of your time with this game, but there are a few times you’ll have to crawl around back of these piles of cubes. It’s then that the direction of your controls, from right to left, sometimes inexplicably flip. If you’re not frantically climbing away from danger, you can stop and work your way out of this. Those situations are rare, though.

Besides these, there are a few times that a boss obscures your view, forcing you to let yourself die. It’s a cheap death that you’ll likely only encounter when you’re not doing that great anyway.

Conclusion: So you’re not going to bitch about the difficulty?

No, I’m not. It’s hard, yes. Super hard. But I’d go as far as saying that I don’t even think it needs that patch they said they’d release. I might change my mind as I get closer to the end of the game, but right now I’m fine dying 10 times to figure out what I’m doing wrong. I think the game does get dangerously close to being unbalanced toward the too difficult side, and there are some later stages that basically force you to use trial and error to figure it out, but I haven’t quit yet. And this is coming from someone who is terrible at puzzle games. Again, it’s all about paying attention to the optional dialogue. 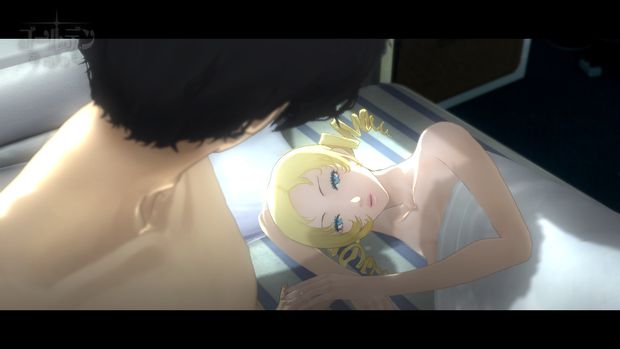 As I said in the intro, you already know you want this game, so it doesn’t really matter what I say. Basically all I’ve done here is fill out some details for you and maybe gave you a few more reasons to be excited about its Summer 2011 release. Catherine is a fantastic game and you should continue to look forward to its release. Atlus tried something new and it really paid off. Hats off to them.