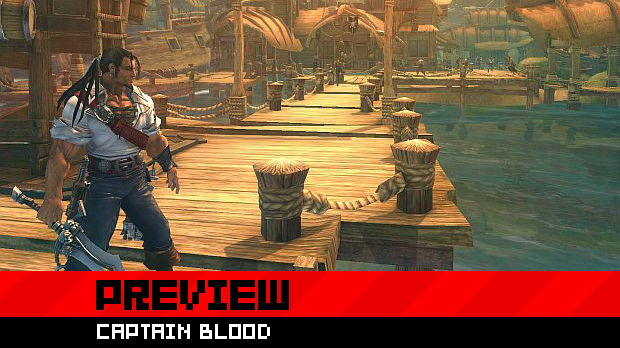 Another night in Moscow was an interesting event. While many of the games were decidedly Russian in nature and narrative (where’s looking at Men of War: Red Tide and Death to Spies: Moment of Truth), quite a few of the games bucked the trend that a game published by 1C Company should have a level that takes place in Siberia.

Captain Blood is one such game. Based on the Captain Blood series of novels by Rafael Sabatini, as well as the Errol Flynn-starring films, the Captain Blood videogame is as decidedly pirate as you can get. The characters are all burley buccaneers and scallywags, all the ships are grand galleons, and, really, the only way this could get anymore piraty is for it to take place off the coast of Mogadishu.

Hit the jump for my impression of Captain Blood

In Captain Blood, you control the namesake anti-hero as he does piraty things. There are actually two different modes on display in the game. The first is the hack-n-slash portion of the game, where you run around as Blood and attack with strong and light attacks that can form into combos, rolls for avoiding enemies, and you shoot dudes in the face with an old time gun. Topping things off is a berserk mode which presumable allows you to deal out extra damage during battles.

This portion of the game right now is a little problematic. The right analog stick controls the rolling action, but this creates a nasty situation of no camera control.  This would be fine if the levels were perfectly designed, but chains, explosions, smoke, and cannons across the levels would get in the way of the action. 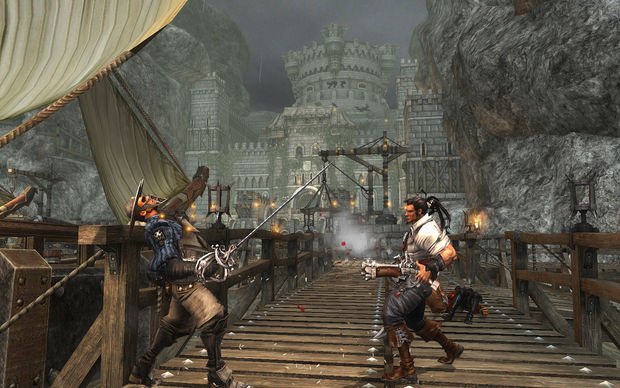 This is especially apparent in one level where Blood is tasked with running from cannon to cannon on his ship to blast an incoming fleet of ships. This worked fine most of the time, but there would be moments where the reticule showing where the cannon ball would land is completely hidden by…the cannon. Ugh.

Another problem with this hack-n-slash portion of the game is that the levels were frustratingly difficult. Other journalists from at the event, myself included, struggled to defeat the boss battle on display. Gun toting enemies would shoot Blood from the other side of the arena, interrupting attack animations and quickly draining the health bar. We all ended up skipping the level.

The second major mode in the game is a ship mode, placing the control of the actual ship. Different from the cannon mode I had mentioned, you’ll be sailing about to destroy other ships in a more cohesive manner. Here is where you are going to take control of dealing with wind and weather conditions, and setting up your ship for your men to deal with the cannon fire. 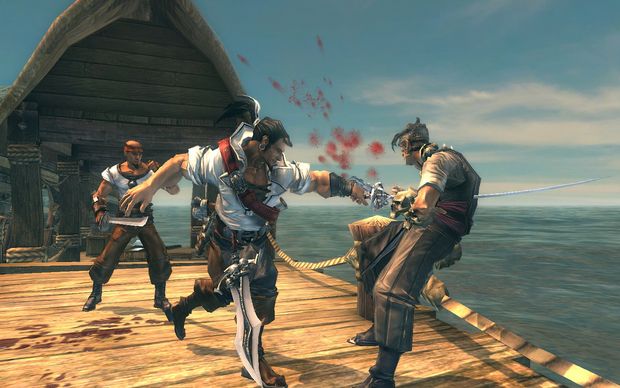 One facet that holds a lot of promise is the graphics. Captain Blood is vivid and tropical with a level of non-realism that seems to fall between the lines of Treasure Island and the Pirates of the Caribbean movie. The water looks great, and the ship animations seem to work pretty well as well. For example, I love how if you misfire a cannon, and clip a sail, that sail will be torn from the masts and flop around in the wind. It looks like developer SeaWolf is putting a lot of effort in making sure the ships break apart like a real ship would.

The characters themselves fall in line for a fairly unrealistic representation; however, the stylized models will probably lend themselves better to the slightly unreal swashbuckling action of the game.

Ultimately, I feel that Captain Blood was one of the more interesting games of the night. It needs a fair amount of work (find a way to add camera control, please SeaWolf. Oh, and make sure the difficulty isn’t unfair), but the basic game is in place, and even though I was playing a pre-Alpha build, I found the game to be fun. Besides, isn’t that the point of a pirate game?