At a recent event in Los Angeles, developer Treyarch showed off for the first time the multiplayer aspects of the upcoming Call of Duty: Black Ops. It was a massive, all-out affair, and this was simply for the multiplayer part of the game, which speaks volumes to the focus Treyarch is putting into this aspect of the game. I was at the event and got to see all the new multiplayer features on a big IMAX screen. Really, it was huge; so was some of the news it dropped about the upcoming multiplayer.

We’ll get to the hands-on time below, but I’ll just explain the new stuff quickly here. The two big things are “Combat Training” and the introduction of a money system/economy for the game. The latter, which uses a made-up currency called “COD points,” opens up a variety of new features and gameplay modes for the game including four new modes that let you bet on the match. Yes, gambling has finally come to Call of Duty.

The line that Dan Bunting and David Vonderhaar, the two leads on Call of Duty: Black Ops multiplayer, were outing at the event was that of three Cs: Compete, Customize and Create. They said that Treyarch went into developing the multiplayer with the idea of taking these three Cs and developing them further than they had ever been pushed before. I’ll start with create since it’s the biggest sucker of the three, and I’ve already discussed a bit about it above.

Obviously, competition is the bread and butter of any competitive multiplayer game. We all pretty much know what we’re getting at its base when we pick up a Call of Duty game and play the multiplayer, so what is important here are the new features.

The first and most important change is the inclusion of the aforementioned “COD Points.” You get “COD Points” for a plethora of different things in multiplayer, and you can use them to buy upgrades, outfits, features, etc. I was told the list of purchasable things in the game was massive, and that implementing this in-game economy was a way to allow players to develop their character the way they wanted to, instead of simply leveling up. 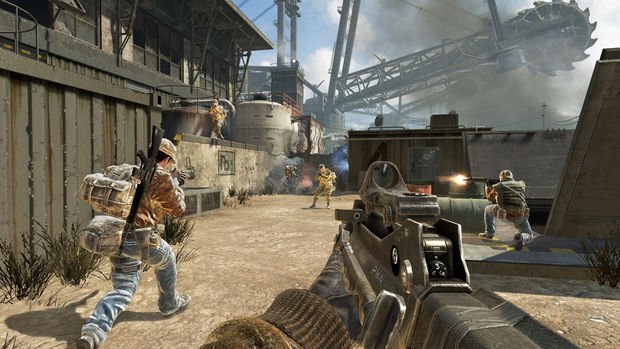 You’ll earn money the usual way (killing, winning, etc.), but thanks to the inclusion of the “COD Points,” there are also a few new kinds of gameplay. One kind are the Wager Matches, which you can check out here in trailer form. These matches allow you to wager “COD Points” and then play out a battle, with the top three players receiving the pot divided up in decreasing amounts.

The four Wager modes actually sound really interesting. The first is “One in the Chamber,” in which all the players start the game with a pistol, one bullet, and three lives. If you kill a person with your one bullet, you can pick up their bullet. If you miss, then you’re running around weaponless, and have to use a bit more stealth to get a kill and another bullet.

The second mode is “Sticks and Stones,” which starts everyone off with a crossbow, a knife, and a tomahawk. The trick here is that if you’re hit with a tomahawk, you’re bankrupted and lose any money you might have earned. I actually got a chance to play this mode, and while I suck at hitting people with tomahawks, I must say it was a shining example of how much more you care about something when money (even if it is fake) is on the line. I was so much more pissed-off every time I died because I was actually losing something, and when the match ended I just wanted to play again to see if I could get my fake money back. It definitely shifts how you play a round a bit, and I think it will be a welcome addition to the multiplayer, especially since these modes are separate from standard, ranked gameplay. 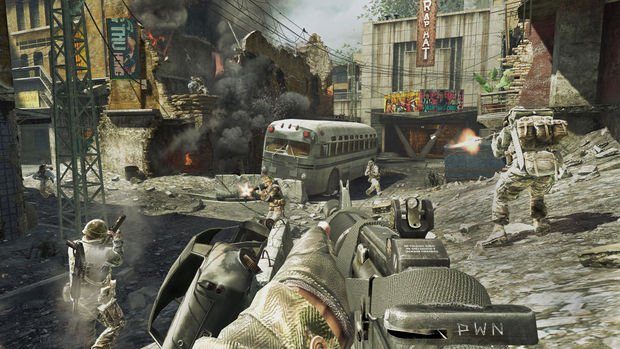 As for the last two modes, they are “Gun Game,” where players progress to a better and better gun every time they get a kill and drop down to a worse gun every time they are killed, and “Sharpshooter,” which starts the match with every person playing having the exact same weapon, and no other weapons are on the map. After a certain amount of time the weapon changes for all the players, so in essence everyone has to fight with the exact same gun at all times.

However, placing wagers on your matches isn’t the only way to earn yourself some extra cash. The game will also feature Contracts. Contracts are challenges that you opt into and have to complete in a certain amount of time. For instance, you might have to kill 10 people with a headshot in 24 hours. If you take a Contract and complete it you get paid, if not, you get nothing. Contracts will vary in type, length, and difficulty, with the more difficult ones being worth more money. Treyarch says that it will be putting out new contracts nearly daily, so there will always be new challenges to sign-up for.

The second big, new thing in the “Compete section” of the presentation was the “Combat Training” mode. This is basically single-player (or co-op) multiplayer. That might sound like one of the most idiotic statements ever made, but it is actually a brilliant idea, especially for people like me who hate hopping into a multiplayer game and getting destroyed before they can even learn a map. What “Combat Training” does is put AI bots into a multiplayer level, and lets you learn the level and tactics before jumping into an actual multiplayer bout. 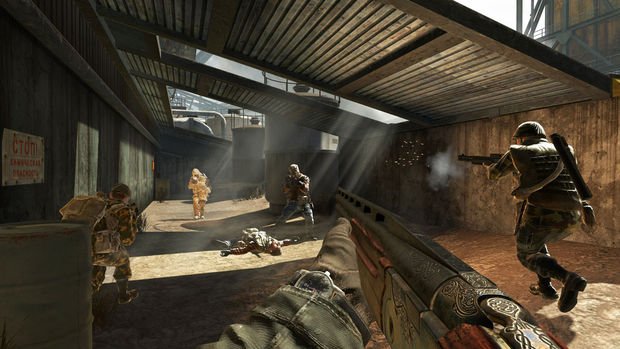 While playing against bots in a multiplayer stage isn’t a new idea per se, it’s something that hasn’t been featured in a CoD title, and the mode isn’t just an offshoot of having bots in the multiplayer — it’s actually designed to help teach people how to play multiplayer. The devs are hoping that it will bring the 40 percent of CoD players who don’t touch the multiplayer mode into the fold. I likened it to the Wii, which Nintendo says will bring casual gamers to hardcore games. Well, this brings hardcore gamers into more hardcore things — bridging the gap between single-player and multiplayer, if you will.

There are other changes to the competition as well. These include new, more interactive, killstreak rewards, which were demoed in a video for us, and included a giant chain gun called the “Death Machine” and a rocket launcher type device called the “Grim Reaper.” I, sadly, suck at shooting people dead, so I didn’t get to experience using any of these new perks, but I did have the pleasure of being mowed down by a few of them. They hurt.

The final change worth noting is something that seems small, but could change the way people play. When you choose your loadout before the game it will affect the way your character looks. A sniper will have a gilly suit on while an explosives expert will be more heavily armored, etc. While different stats and abilities are obviously not new, looking different depending on your class is. They didn’t dwell to much on this, but for me it seemed like one of those things that could lead to people playing the game very differently in that you may go after a certain person or fight a certain way because now you’ll know their strengths and weaknesses at first glance. 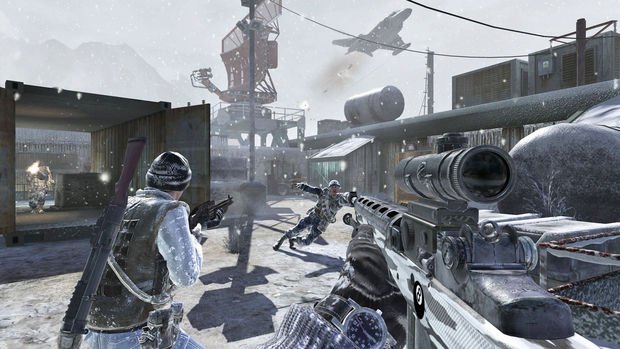 Now on to the other two Cs, which turned out to be far less important, but still pretty cool. Customize is exactly what it sounds like. You’ll be able to customize almost everything from your face paint to your gun’s site and colors. You will even be able to throw your own symbol, which you can also create and design in far more detail then ever before, onto your gun. Of course, all of these options and modifications are going to cost you “COD Points.” It’s a nifty feature.

Finally we come to Create. Create covered two topics, one of which was the previously discussed in-depth symbol creator. They demoed it at the show, and while basic it’s more than most FPS give you. You can choose from a plethora of designs and then shrink them, color them, rotate them, and move them all around. Then you can choose other designs and put them on your previous one in layers. The example given was turning a braying horse with its hooves in the air into a braying horse with two guns for hooves in the air. You can also mess around with your emblem’s background.

That was probably a paragraph more than that subject really deserved, because the part of Create that is actually important is the Black Op‘s Theater. In this you can take any match and slice, dice and splice it to your heart’s content in order to make the most badass CoD video ever. Vonderhaar discussed it more in depth in an interview Destructoid did with him that will be going up later, but players will be able to choose to grab shots from any players perspective or use the free cam to get the perfect angle on that headshot they landed. Treyarch also really wanted to push this as a way to “study film.” The developer hopes players will be able to look back and see how levels are used best and how they got beaten, and thus become better players. 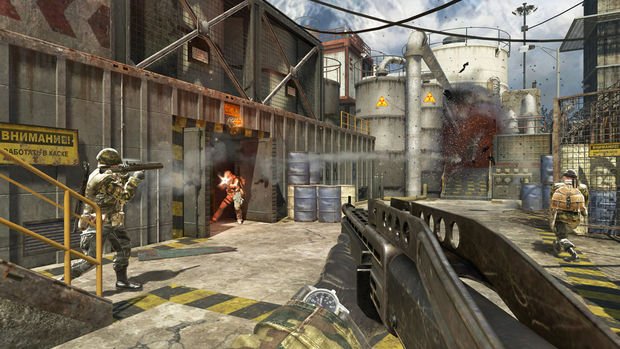 While I only got a little bit of playtime with the game, I can tell you that it’s a Call of Duty shooter. It plays like you would expect it to play. Of course, I’m not an expert on the minute details of Call of Duty combat; I just play for fun. If the grenades have been gimped in some way or the new assault rifle fires differently in some minuscule manner, I would not have noticed. I’ll leave those details to the relentless experts to argue over.

What I can say is that it was fun, and Treyarch really — almost desperately — wants to prove that it can make the best multiplayer experience on the market. With so many competing franchises jumping in, that will be hard to do, but it’s definitely clear that they’re hard at work on it.

Filed under... #Call of Duty#Treyarch