Borderlands has been hot on our radar for a while now, even before the dramatic change in art style that recently saw the game gain huge publicity. We’ve been itching to see the game in action for a while now, and our wishes were granted at E3 when we had the pleasure of watching a gameplay walkthrough with Gearbox Software boss Randy Pitchford.

We all know how good the game looks by now, but does the gameplay match the visuals? Read on as Jim Sterling and Conrad Zimmerman share with you their thoughts on Borderlands.

Ever since Borderlands changed its graphics to the amazing hand-drawn style that has made it famous, I’ve wanted to know one thing — just how beautiful do those images look when they’re in motion? The question has been answered, and I must say I am incredibly impressed with what I’ve seen. The characters and enemies look very striking indeed and the first-person perspective evokes memories of the cel-shaded shooter XIII, which is most definitely a good thing. Borderlands, however, looks even better than XIII did. The gameplay seems pretty bloody good to boot, as well. 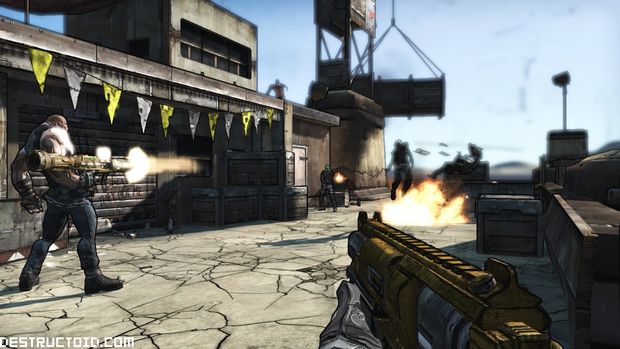 The demo was a co-op session in which the female Lilith and the bulky brawler Brick took on some Skag Pups. When someone says “Skag Pup” I think of a dog on heroin, but these things are more like the walking worms from Tremors 2. They roam in packs and come in variants, such as acid and fire spitters. Elite enemies in the game are referred to as “Badasses,” which gives you an idea about how seriously the game takes itself (not very).

The game presents itself as a straight FPS, but with heavily customizable characters, skill trees, experience points and, of course, plenty of loot. It is similar in many ways to Fallout 3, but with the VATS removed and replaced instead by far more robust shooting mechanics that don’t need a gimmick in order to remain playable. Like Fallout 3, Borderlands has a very apparent sense of humor. It also has plenty of missions to be undertaken in an open world, and is suitably gory, with special skills that tend to make heads explode in a shower of artistic claret. 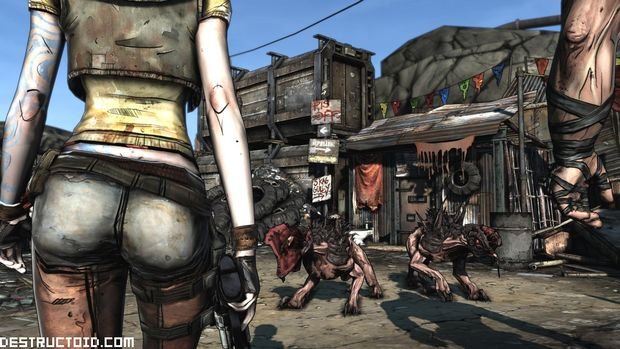 We were shown how players can drop in and out of games, with characters easily able to team up whenever they please. The procedurally generated monsters also scale with respect to how many players are in the game, becoming stronger to match the larger allied force.

The main mission we were shown involved blowing up an enemy factory. It was being protected by Midget Bandits (yes, that is their in-game name) and creatures with, as Randy puts it, “tiny little gimp arms.” Playing from the perspective of Brick, we got to see some first-person brawling, with enemies getting punched left, right and center. We also saw Brick’s special “Berserk” power which, as you might expect, makes him an absolutely vicious bugger with his fists and causes him to laugh like a maniac with each kill. It’s all very family-friendly.

The mission ended with the factory exploding, and what an explosion it was! It started small, but quickly became huge, with the building slowly being torn apart and structures crumbling before one’s very eyes. It was a very impressive setpiece and one hopes that there are even bigger bangs than that one buried within the game.

My initial impressions of Borderlands are very positive indeed. It’ll take me getting some hands-on with the game in order to properly gauge just how good it is, but so far it’s looking rather excellent. This is definitely a game to watch as we head toward its end of year release. Don’t let Borderlands slip from your radar. 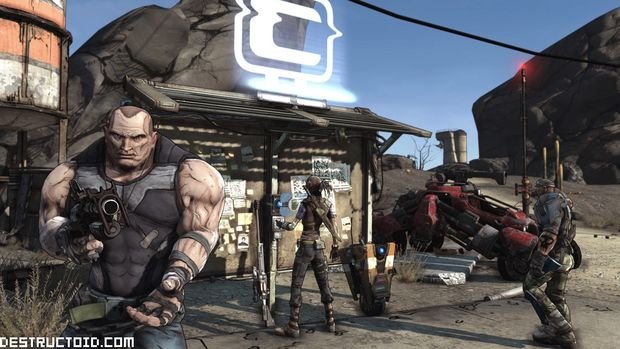 I, too, am thoroughly impressed by what I’ve seen of Borderlands thus far. Having watched the same gameplay demo that Jim has, I took away much the same view of the game’s visuals and gameplay mechanics.

The thing about Borderlands which stuck out most in my mind was the loot and experience system. Never before have I seen a shooter which so closely resembled Diablo II. As Jim points out, players who team up in groups face more difficult enemies but are rewarded with more valuable gear and granted greater experience points. 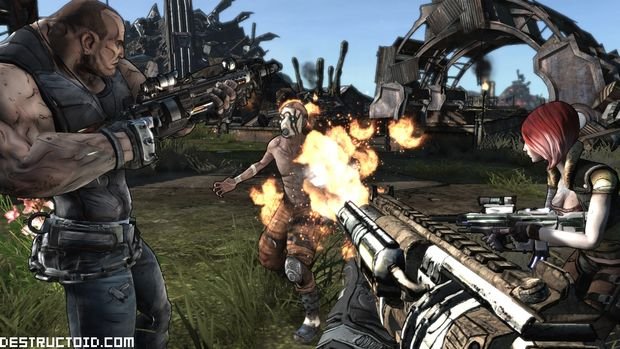 Also fascinating are the weapons available. The claim is that there are “more guns than every shooter on the PS3 and 360 combined” and this seems entirely possible. The way they managed to accomplish such a feat was by not placing the onus of weapon creation entirely in the hands of designers. The game’s AI handles all of that for them, putting together weapons based on a variety of factors such as the company which made it, the materials used and what optional equipment is available.

What results is that every possible combination of these factors can result in a different gun. This calls into question whether or not the game can remain balanced — the system is perfectly capable of churning out some god-like weapon at a moment’s notice — but that’s some of the thrill of the experience in my eyes. Amusingly, when asked about the possibility of such a thing happening, the folks at Gearbox seem gleefully unconcerned. 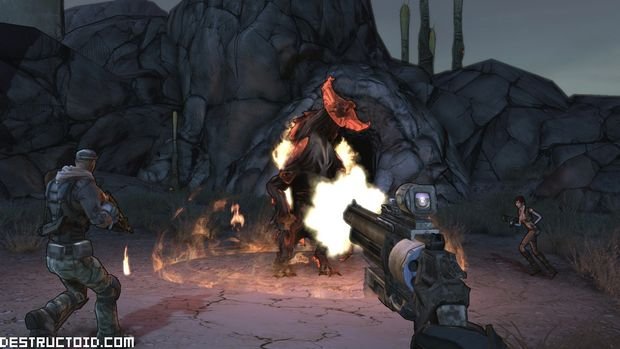 That’s probably because PvP combat is completely voluntary and holds little consequence. There are arenas within the world where players can battle one another if they so choose. A system for duels also exists to allow players to throw down with one another anywhere on the map but you have to opt in for any sort of PvP and that makes the weapon balance much less of a concern.

The game has a strong showing right now and looks to be a lot of over-the-top, hyper-violent fun. The thought of combining a shooter with Diablo tickles me in so many ways that I’ve already started making plans with my friends to have a team together when the game comes out late this year.