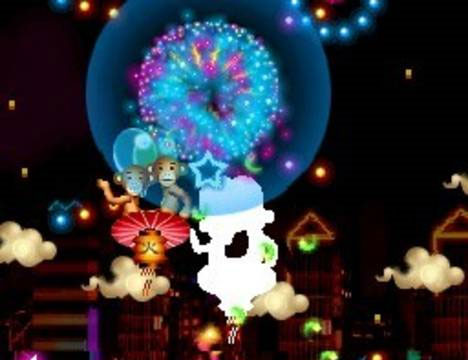 On the surface, Big Bang Mini looks like a very simple shooter game. You control your ship by dragging it around with the DS stylus anywhere on the bottom screen and flick the touch screen as if you’re lighting a match to shoot at enemies on the top screen.

It’s a very simple game but there’s so much more to it than just that. Hilarious enemies, a wonderful soundtrack and probably one of the coolest final bosses I’ve seen in a game this year all make up Big Bang Mini. Hit the jump to find out more about it.

You’ll be traveling across the world in Big Bang Mini as you take on shapes and cute little creatures. You’ll be exploring over 90 levels in nine different worlds, each containing new enemies and power ups with every world ending in a multi-layered boss fight.

To progress from level to level, you have to destroy the enemies on the top screen and collect the stars they drop as they fall onto the bottom screen. Once the gauge on the left hand side of the touch screen has been filled up with star power, you’ll be able to move on to the next level.

How hard the game is up to you. You can play the game calm and casual, taking careful aim with your shots. Or, you can play crazy and create bullet hell. If you miss your target, your fireworks will explode as a real firework would and will come back raining down upon your ship. You’ll have to dodge the firework aftermath and worry about incoming enemy fire too when this happen.

Every world will offer something new to aid or slow down the player’s progress. Jumping into the second world, I saw that the wind could actually change the way the bullets moved. To counter this, the player is given a vortex power up. Simply move the stylus in a circular motion on the touch screen a couple of times and a vortex will appear that sucks up all enemy fire. Other power ups will include homing missiles, charged shots and a reflecting mirror that bounces back enemy fire to the top screen. Later levels saw the bottom screen shrinking in size, Indiana Jones style, and giant beams of lasers exploding out of downed enemy ships. One level is even set underwater and you have to collect air bubbles so you don’t drown. 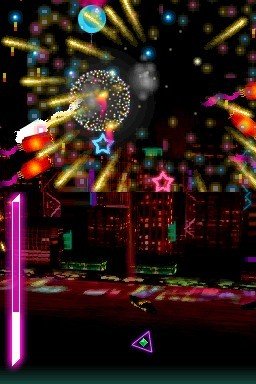 At the end of each world is the boss fight. The boss fights have four phases and each phase gets harder than the previous one. Firework feedback isn’t applied here so if your shot misses, you won’t have to worry about your own fireworks raining back down on you.

Big Bang Mini has a lot of cool bosses. From a Mohawk sporting Walrus, to a boss that’s nickname is Captain Gay, this game has some pretty fun bosses. Nothing beats the very last battle with the Typography boss made up of the alphabet. I want to describe this battle, but I don’t want to ruin the experience. I can say that it’s easily one of my favorite boss fights of 2008.

The game will sport over 31 songs and from what I could make out while playing this game in the noisy bar (blogging is so hard), it sounds very good. The soundtrack actually just received an award even. Plus, any soundtrack with an 8-bit version of “Flight of the Valykaries” deserves an award.

To finish off the arcade portion of this preview, here’s something you won’t hear about from any other preview of Big Bang Mini: Players will have a 1 in 250 chance of playing in a retro level. The visuals all turn into something you’d see in something like the original Battlezone or Tempest and yours truly was lucky enough to get this random level. Of course, everyone went crazy when this happened and the pressure made me die within five seconds. 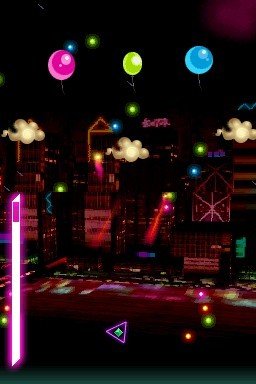 Other features will include online leaderboard, an alarm clock feature using the games music, an endless mode where you play until you die, and two player single cart versus mode.

The versus mode will see both players holding the DS like a book and you have to take out the other ship before it takes you out. There will be four stages to choose from and each player gets four power ups to use which are: bubble shield, a shrink ray, a reflection blast and an eclipse of darkness that blacks out everything on the opponents screen except where the ship is. You’ll also be able to reflect enemy fireworks by tapping them as they appear on your screen.

My only issue with the game is with the multiplayer mode. It’s really odd that players have to hold the DS like a book in versus. Both ships aren’t actually pointing at each other either, just facing up. You have to strike the touch screen in a curved pattern towards your opponent in order to fire and I found this method to be a little troublesome.

All in all, Big Bang Mini was a ton of fun. It has some fun gameplay elements, funny enemies and bosses, and best of all; it’s only going to be $19.99 when it’s released early next year.