A sunset ferry ride is the last thing I would ever lump with coverage of a videogame, much less a videogame dealing with the violent struggle and sea battles in the World War II Pacific. But there you go, sometimes my ideas don’t necessarily represent how things pan out. So it was Thursday night last week that I found myself cruising across the San Francisco Bay to the U.S.S. Hornet for hands-on of Eidos’ Battlestations: Pacific.

Alright, fine, I’ll be the first to admit that I hadn’t much of a clue about the game, other than it was the sequel to Battlestations: Midway, a generally well-respected 2007 release I seemed to have missed. To compensate, I learned that this was an RTS, which immediately brought to mind some fusion of Command and Conquer and 1942.

However, walking aboard the gi-freaking-normous Hornet, past 80-year-old fighter planes and posters showcasing the ever-popular pin-up girls, toward the twenty or so demo stations, it was soon shown that this game is something a little different.

Hit the jump for my impressions of Battlestations: Pacific. 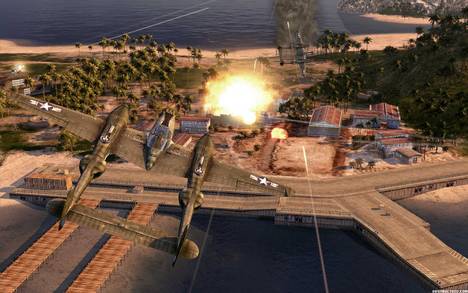 Battlestations: Pacific, to my surprise, isn’t really a real-time strategy game, which players of the original would have responded with a solid “duh”. It’s a fusion between an RTS, like a commanding officer controlling from afar, and the hands-on control of a fighter pilot or ship captain. Depending on what mode you are playing, you might be ordering massive ships, submarines, small boats, paratrooper planes, fighter planes, and other real-life (or prototype) WWII-era war machines across a massive sea based-battle ground, or taking control of those individual boats and planes for a more immersive approach to war.

I’ll be honest, to just sit down to this game and start playing, say, eight-player Island Capture Mode, is very difficult. The controls are really complex, and wrapping your mind around who you are controlling and how each of the ships and planes control was frustrating. Battlestations: Pacific uses every button on the 360 controller, and depending on whether you’re on the RTS screen or the hands-on screen, each button does something different.

Thankfully, Alastair Cornish, one of the game designers from Eidos Studios Hungary (the team making the game) addressed this concern. The demo I played had the hints system turned off, he told me, and the best way to play to succeed at multiplayer was to play through the single-player for experience.

The single-player levels they had on hand were four separate missions from the two campaigns. The American levels showcased, based on real-life WWII battles from Leyte Gulf and the Eastern Solomons, each showed off different battle positions players would be placed in. 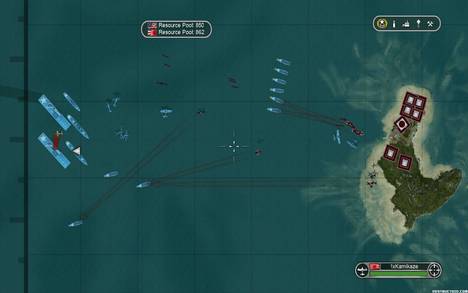 “Devine Winds of Leyte” is a defensive mission, where only a slow moving battleship was under control from a siege of dive-bombing kamikazes. “Battle of Eastern Solomons,” however, is an offensive attack against a Japanese escort ship. Most every battle in this campaign is based on real-world battles, ultimately ending in Okinawa.

The Japanese missions, which Alastair mentioned are generally easier to play through, offer a completely reworked telling of WWII. This is probably the most interesting portion of Battlefields: Pacific, as it tells what the Japanese really hoped to have succeeded with in the Pacific, starting with Pearl Harbor. This could be a really interesting plot element, and if it works could make replaying the two campaigns, American and Japanese, worthwhile.

But really, we all know games what makes many games worthwhile is the multiplayer modes, and Battlestations: Pacific has that in spades. There are five multiplayer modes, with up to eight players in a 4vs4 match style. There is Escort Mode, where players either destroy or defend units, and they are only allowed to control one unit at a time.

Siege Mode allows one side to defend a base with their units while the other attempts to take over it. Competitive Mode allows everybody to work together, but ultimately it all comes down to the number of kills or objectives completed. Duel Mode has the units chosen pre-battle, and each person controls one unit individually until a certain number of kills are made.

Finally, there is Island Capture Mode, which plays much like a control point mode in an FPS. Each side must work to capture enemy and neutral islands with paratroopers and invasion soldiers. This mode shows off strongly the RTS element of the game, as each player is under control of multiple units and must juggle playing as those individually as well as ordering other units around. Taking all of the different multiplayer scenarios and maps into account (separated by the faction you are playing as), there are 96 different scenarios to play through. 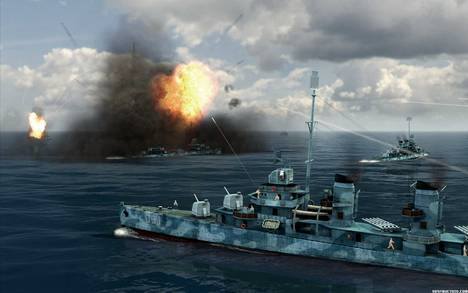 Ultimately what Battlestations: Pacific represents for Eidos is a streamlining and general improvement over Battlestations: Midway. Pacific now has a cockpit view, as well as night- and stormy-weather conditions. The graphics for the game have also been improved, with water rendering receiving a major boost. And although this game is complex, the promised hints and in-game training elements, as opposed to a lengthy tutorial, should help simplify the game for those just starting out, as well as get the game going at a decent clip.

All of these improvements might not sound like much, but it represents Eidos acknowledgment towards fans of the original game and taking their advice for improvement to heart. That’s always a good sign for any game, when a developer listen to their fan-base.

Overall, the experience with Battlestations: Pacific is one of Eidos improving on what is considered a good game and making it bigger, larger and better. The graphics have some really sweet renders of the South Pacific, and although I did notice a glitch with a plane flying through most of a building, the rest of the game looks pretty great, especially the satisfying explosions.

Other than that previous quibble, there’s a lot going on, and it’s nice to see Eidos work hard at making the separate elements come together. Hopefully, they’ll make everything work together absolutely perfect for the final release this April.