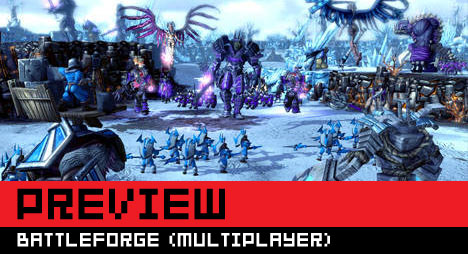 The other day, I had a chance to spend some time on EA and Phenomic’s upcoming real time strategy game, BattleForge for the PC. If you haven’t heard of it before, shame on you — go eat some glass.

I’m just kidding, glass costs money. What you can do to make up for your lack of knowledge, though, is head right over here and read Samit’s devilishly handsome NYCC impressions of BattleForge. If you would like to hear some impressions about the multiplayer in action, then carry on past the jump. 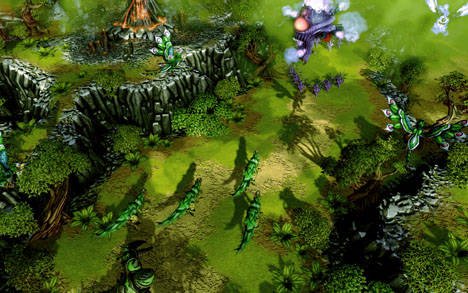 Just in case you were too lazy to read Samit’s article (and you should feel bad if you were, because he puts a lot of time into them), BattleForge is on online RTS that incorporates the idea of using tabletop gaming cards to represent the game’s different types of resources. Now, on to the multiplayer!

The first round of online we played was pretty confusing. Having never ever played the game, it was kind of difficult to just jump right in and know what you were doing. I think others there were having the same issues, so it was suggested that we all try out the tutorial if we wanted to. That was a very good suggestion.

While the lobby menus seemed pretty weird in some places, the tutorial taught you everything you needed to know in no time flat. Right away, I figured out exactly how to use the trading card style item management and exactly how to use it effectively in the game.

Which is pretty cool, because most RTS games beat the crap out of the player with requiring them to build resources forever before ever getting to any sort of fun gameplay; building a tech tree, I believe it’s called. And it becomes apparent that BattleForge’s use of the trading card idea is more than just an aesthetic decision in reference to that.

It functions in a way that gets rid of that whole tech tree business and lets you start playing and moving forward in the game at a quick pace. Getting ahead and building new walls, defenses and occupying new areas was accomplished within the first two minutes of the match. You knew exactly what to do, where to go, and how to use all your resources with no problem thanks to the easy to read trading card UI. 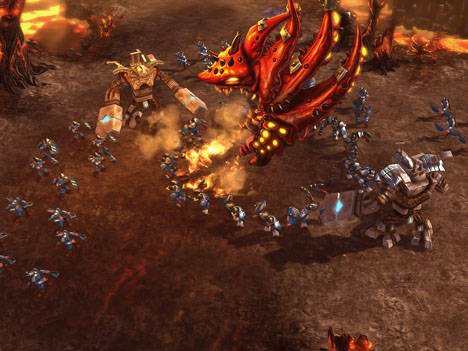 Granted, I don’t want the game to come off as sounding too easy. The amount of times you can play a card, and the amount of time it takes to recharge each card, limits the amount of units you can put on the field at any given time. If you use all your, say, five of the available soldier cards, you’ll have to wait until the card replenishes again to replay more soldiers. This amount of replenish time doesn’t scale with the amount of energy you’re building; the time is always the same.

This, as I was told, was to force the player to use their cards more wisely, and to keep them from spamming units onto the field. I feel that, although it’s a little different than other RTSs because of that, the idea helped to keep the game from feeling like it would be too easy. And while the game is ridiculously easy to get into and start playing, it’s apparent that there’s quite a bit of depth to this title that we barely even scratched the surface of in our couple hours of play.

When I originally saw the concept of the title, I thought it would be just a weird card game spin-off and not a real RTS. But seeing the way that BattleForge blends the trading cards into the RTS genre, and not the other way around, I feel that this may end up being a really solid title for RTS fans. It’s also a lot of fun for people who aren’t really all that into meticulous resource management and just want to have fun with their RTS game.

I know that I had a lot of fun playing around with the battle system and its cool looking trading card-esque menu, so I may keep an eye on this game when it comes out March 24th. If you want to see it sooner, you can also check out the open beta that begins on Feb, 27, and see what you think.

And, no, I don’t know why the screen shots don’t have any pictures of the trading cards in them. I can only give what I get, folks.