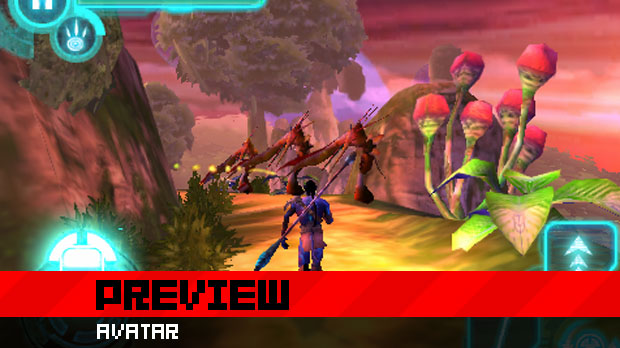 Avatar. James Cameron. Huge budget. Big deal. Of course it’s going to get a game or two. But who would have expected a lovingly crafted platformer for the iPhone? I surely didn’t, but that’s exactly what I saw when Gameloft had me out to check out their upcoming game, Avatar.

It has been in development for over a year, in cooperation with Mr. Cameron and the folks at Fox. The assets and artwork were passed along, as well as ideas and guidance. But don’t expect the typical licensed game version of the movie here. This is an original story with original environments and characters, and takes place 20 years before the events of the movie.

Every once in awhile someone takes movie games seriously. We dig that. But to put this much work into an iPhone game? That’s serious business.

Gameloft calls their Avatar a prequel. It takes place in the movie’s universe, on planet Pandora, but it fills in the story with events that took place before the movie’s story begins. It looks to be a good companion to the film, with its introduction into the movie’s world, complete with full-on cutscenes and some voicework from movie cast members (the lovely Zoe Saldana was namedropped).

Avatar is a action platformer. You control a ponytailed blue being named Ryan Lorenz, playing as the first avatar in a fantastic world that spans from nature to science fiction in setting, doing everything from traversing on foot to riding six-legged horses and flying on the backs of what look to be pterodactyl-ish beasts. Honestly, from my limited time with it, I have no idea what was going on, but it was fun, and definitely interesting. Some quality time with the game’s story elements would remedy that, surely.

There’s slicing and shooting, running, jumping and more in this full-featured adventure title. It’s all controlled with a virtual on-screen joystick and buttons.  Players take on varied and imaginative beasts with button-mashing combo attacks with things like spears and bows. But there are guns, too, letting you take down enemies with a mix of offensive and defensive attacks. There’s an auto targeting for the enemies, but that lets loose and hurts all around with special attacks. Having only an attack and a jump button may seem too simple, but the way the enemy A.I. works alongside the mix of attack ranges keeps things interesting.

Avatar on the iPhone looks good. Apparently, it’s a polygon -pushing monster. Gameloft told me that there are more textures in one level of this game than there are in whole other games of theirs, with the relatively good-looking title Hero of Sparta given as an example. Lush colors and nice enemy and character models impress. The whole game lights up, literally, with really sweet looking lighting and luminescent effects. Avatar seems to be pushing up the graphical bar for iPhone games.

I didn’t get a lot of time with Avatar, but it was enough to let me know that this game has promise. It’s solid and impressive so far. Gameloft put a lot of work into this game, pushing it past your typical movie license game. It shows that they care about what they’re releasing, even for a phone game. That’s really great to see.

Expect to see the iPhone game to drop around the same time as the movie does.