You may be surprised to read this, but THQ’s upcoming PlayStation 3/Xbox 360 game 50 Cent: Blood on the Sand does not have much in common with the publisher’s other recent hit de Blob for the Nintendo Wii. I know: shocking!

To be honest, I didn’t know what to expect when I got a chance to sit down for some extended hands-on time with the sequel to last year’s critically panned, but commercially successful action game Bulletproof. I mean, 50 Cent and I have everything in common (although I have only been shot eight times), but was there really any chance that his new, ridiculous-sounding action game could actually be good?

I had an opportunity to not only play the game, but to also interview Blood on the Sand co-stars Lloyd Banks and Tony Yayo of G-Unit to find out for myself.

While the epic, highly quotable interview won’t be revealed until tomorrow, hit the jump for my hands-on impressions of 50 Cent: Blood on the Sand. You may be surprised to find out what I think.

Here is the amazing premise for 50 Cent: Blood on the Sand:

You play as rapper 50 Cent as he is just finishing a concert in the Middle East. As he gets off stage, Fiddy finds out that the owner of the venue can’t pay him — all his money was taken my crooks. Before 50 Cent takes out his anger on the man, the helpless owner offers Fiddy a mysterious diamond encrusted skull that has been passed down in his family for generations as payment. Reluctantly, Fiddy accepts.

Driving away with his entourage G-Unit, 50 Cent is ambushed by terrorists and his newly acquired skull is stolen. The game begins with Fiddy, armed to the hilt, determined to retrieve what is rightfully his. 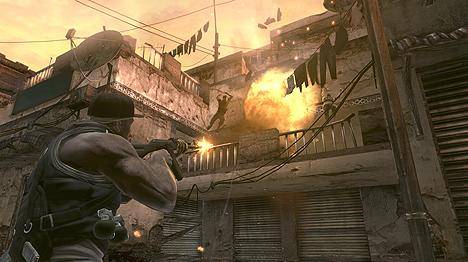 Yup, it’s pretty much the greatest plot in the history of videogames.

Let’s just get this out of the way now: 50 Cent: Blood on the Sand is no Shadow of the Colossus. The game is not meant to make you think or change your life with its deep narrative and mind-bending puzzles. Blood on the Sand is meant to be — and I mean this in all due respect — a dumb action game.

And for that — I can’t believe I am about to type this — I kind of like it. 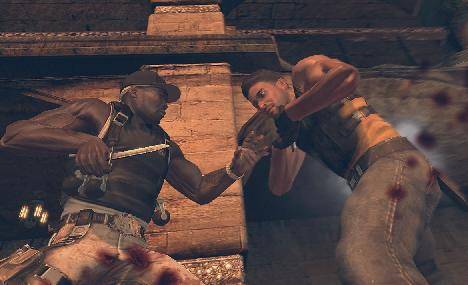 Visually, Blood on the Sand looks pretty good. It, surprisingly, uses the Unreal Engine, which results in some pretty impressive graphics. Textures, while blurry at times, look good, the characters’ faces look true to life, and the backgrounds are full of a shocking amount of detail that really make you feel like you are fighting through various Middle Eastern locales.

Blood on the Sand is no Gears of War, but the visuals get the job done.
But what’s most important is how the game plays. And, that, is where the game excels.

Well, “excels” is the wrong word, as Blood on the Sand doesn’t really do anything special. It just does what it does really well. At times I felt like I was playing a mindless arcade game and, again, I mean that in all due respect. Blood on the Sand is fun: ridiculous, mindless fun. And, really, what’s wrong with that? 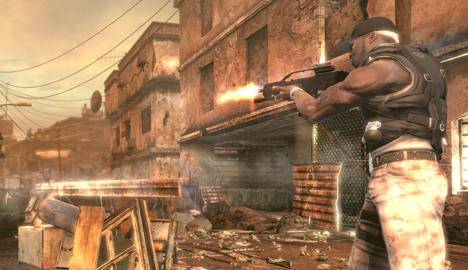 Controls are very similar to something like Gears of War, with the camera following directly behind the main character. Strafing is controlled with the left control stick while aiming is done with the right. Pretty basic, but perfectly effective.

In the game, 50 Cent can pick up a variety of over-the-top weapons, from a basic pistol to a giant rocket launcher. Four weapons can be mapped to the quick menu at once, and each is color-coded to make finding specific, matching colored ammo refreshingly simple.

In addition to 50 Cent, one of the other members of G-Unit — Lloyd Banks, Tony Yayo, or DJ Whoo Kid — runs along with him. Your partner character is not only surprisingly helpful during the numerous gun battles, but once and a while he is used for some basic team-based trigger events. Having trouble getting up to that high ledge? Just hit the “A” button on special glowing icons and Fiddy’s partner will boost him up to his destination. It’s not nearly as deep as Army of Two, but it is a welcome addition.

Even cooler, the partner you choose can be replaced with a human player at any time when played over Xbox Live.

And speaking of your partner, the dialogue between 50 Cent and his fellow G-Unit member is unbelievable. I, honestly, have never heard that much cursing in a videogame in my entire life. From Banks yelling “Fuck this shit!” to Yayo screaming “Fuck him up, Fiddy!”even the early parts of the game are full of some over-the-top R-rated, classic lines. And I swear I am not being sarcastic. It is absolutely fantastic. 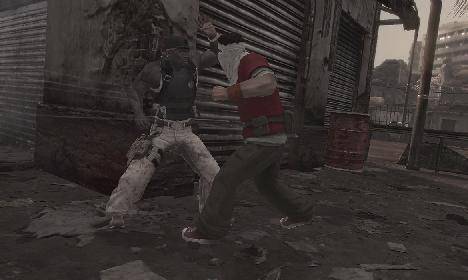 The one thing I was worried about while playing through the first two levels of Blood on the Sand was repetition. The level design — while passable — is very linear. True, it does add to the awesome arcade feel of everything, but the lack of exploration is a little disappointing.

Luckily, on the third level, I got to control 50 Cent as he got behind the wheel of a turret-equipped truck. The driving level was frantic, chaotic, and, most importantly, a ton of fun. Again, the ridiculousness of 50 Cent driving a giant truck through Middle East while blowing up terrorists will never get old to me. 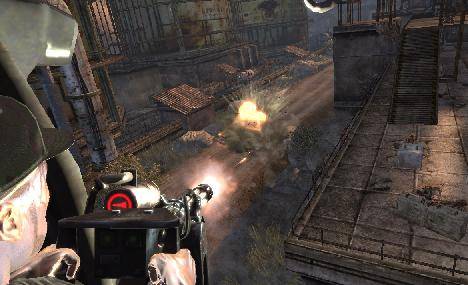 Oh, and don’t even get me started on the epic original soundtrack (gunning down Middle Eastern people to the smooth sounds of 50 Cent and G-Unit is surreal and a little bit disturbing) or the fact that you actually collect “bling” by killing enemies. Like I said: so amazing.

All in all, I was impressed by 50 Cent: Blood on the Sand. Granted, I went in with pretty low expectations, but even factoring that in I still think the game was entertaining. True, it is not a game for everyone — it is pretty shallow and the gameplay borders on repetitive — but if you are in the mood for a fun, almost offensively violent action game where you get to satisfyingly blow a lot of stuff up, 50 Cent: Blood on the Sand is for you.

And just to nail the point home one more time: The game involves 50 Cent killing terrorists in the Middle East.