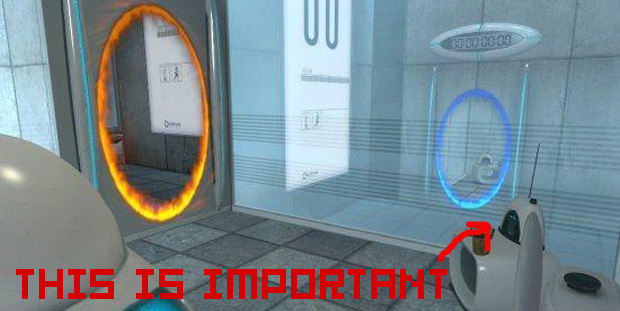 A few hours ago, Portal for the PC was updated, with the following as the only patch note:

In addition, a new achievement has appeared called “Transmission Received”, with no explanation of what it is or how to acquire it. The folks over at Shacknews did some digging, and it appears that the patch added a whole bunch of new sound files to the game, all of which are just Morse Code. There’s 17 minutes of new audio in all, and the sound clips seem to be triggered by doing various things to the radio in Chell’s pod at the very beginning of the game.

It gets even more awesome, though. Some people on the Valve forums ran the audio files through an SSTV program, and got some REALLY interesting results.

Translations of the Morse Code, how to trigger the sound files, and the SSTV pictures are slowly coming in, so if you’re interested in stuff like this keep an eye out around the internet, particularly on the official Valve forums.

This is why I love Valve. Whether this ends up being a major announcement or just a little thing for fun, it gives me a legitimate reason to bust out Portal again and mess around. The way this is developing, though, it seems like this is something huge.

Post your guesses of what this might be, or the results of your own detective work, in the comments. My hope? This is some sort of tie to an about-to-be-announced Half Life: Episode 3. SERIOUSLY VALVE, IT’S ABOUT TIME.

[Thanks Xander, Daniel, and Allen!]