It’s been a little over a week since Pokemon Unite went live on the Nintendo Switch, and a lot of people have been jumping on to battle it out in the Poke-MOBA arena.

I’ve been playing for an as-yet-unknown amount of time and nearing my 100th match mark, and through it all, one thing has become incredibly clear: Zapdos is crucial. The giant Electric-type bird seems key to almost every match I’ve played, and while that’s not an uncommon design choice for the genre, Pokemon Unite‘s Zapdos feels a little more game-changing than most.

Let’s backtrack, for the folks at home who haven’t played Pokemon Unite. It’s a team-versus-team battle arena game, where players control individual Pokemon trying to collect energy and dunk it into the enemy team’s goals, ultimately winning by earning more points than their opponents in the time allotted.

It’s a good setup, and one that works to Pokemon Unite‘s favor. Where other MOBA and MOBA-alikes usually zero-in on base destruction, taking out the Nexus or the Ancient, a score-based system means teams that are behind can still feel “in it,” and enemy teams have to venture further into uncertain territory—and further away from their own goals—to keep running up the score. 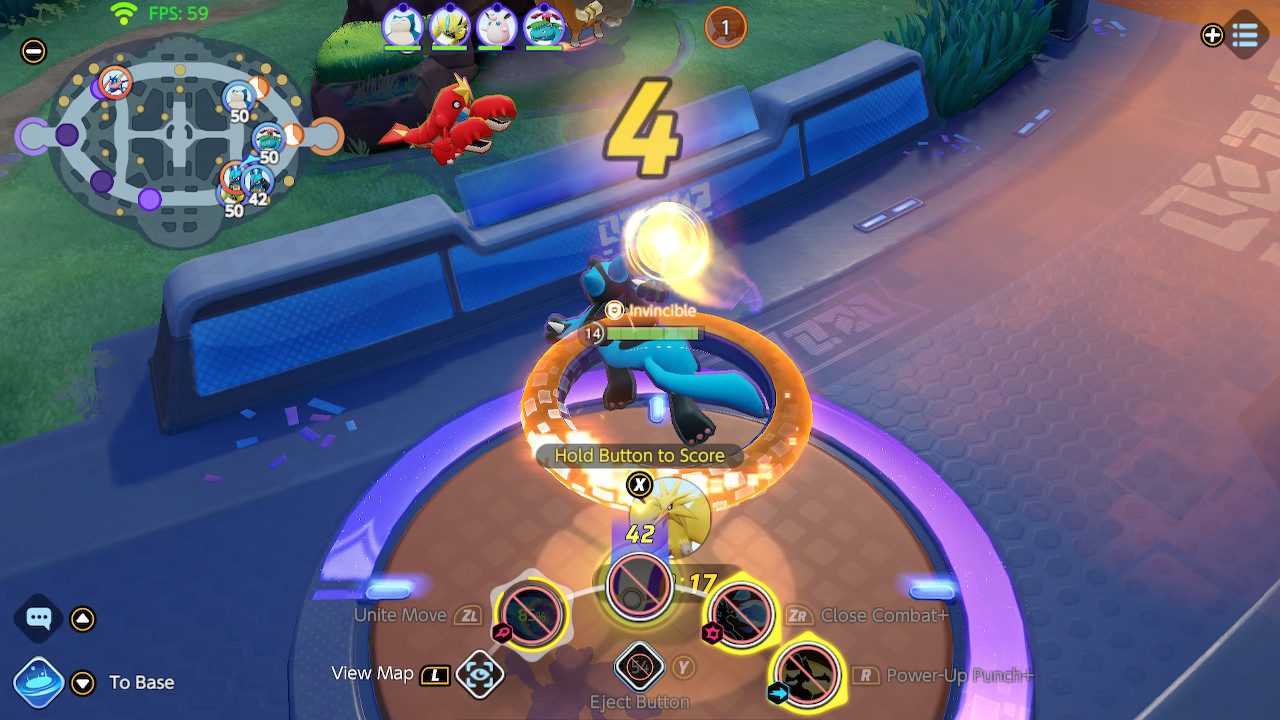 Basing the outcome on score, rather than kills or buildings destroyed, also puts importance on how many points you’re putting into the net with each dunk. And this is where Zapdos comes in.

During every 10-minute Pokemon Unite match, many wild Pokemon spawn. Some are just the innocuous small fries—the Aipoms and Corphish you chomp through at the start of every match—to larger Pokemon, like Rotom. Zapdos is the big one, spawning in the middle of the arena with just two minutes left on the clock.

Zapdos is a predictably fearsome opponent, often requiring a few (if not all) of your team’s players to take down. This leaves your lanes vacant and goals unattended, but the tradeoff is the buff: when a team has the Zapdos buff, they have a short window in which they can dunk instantly, without the usual charge-up that enemies can interrupt.

This, combined with the fact that points double in the home stretch of the game, means massive score swings can happen around Zapdos. I’ve seen, even played on, teams that were struggling for eight minutes straight, only to secure a Zapdos and dunk multiple 100-point dunks to swing the match back in their favor.

I don’t inherently dislike this concept, or at least, the idea of having a big objective to fight over apart from the goals in each lane. It’s a good way of adding some element of strategy; much like Roshan in Dota 2 adds another tactical element to map control and positioning, Zapdos suddenly adds another wrinkle your team needs to keep an eye on. 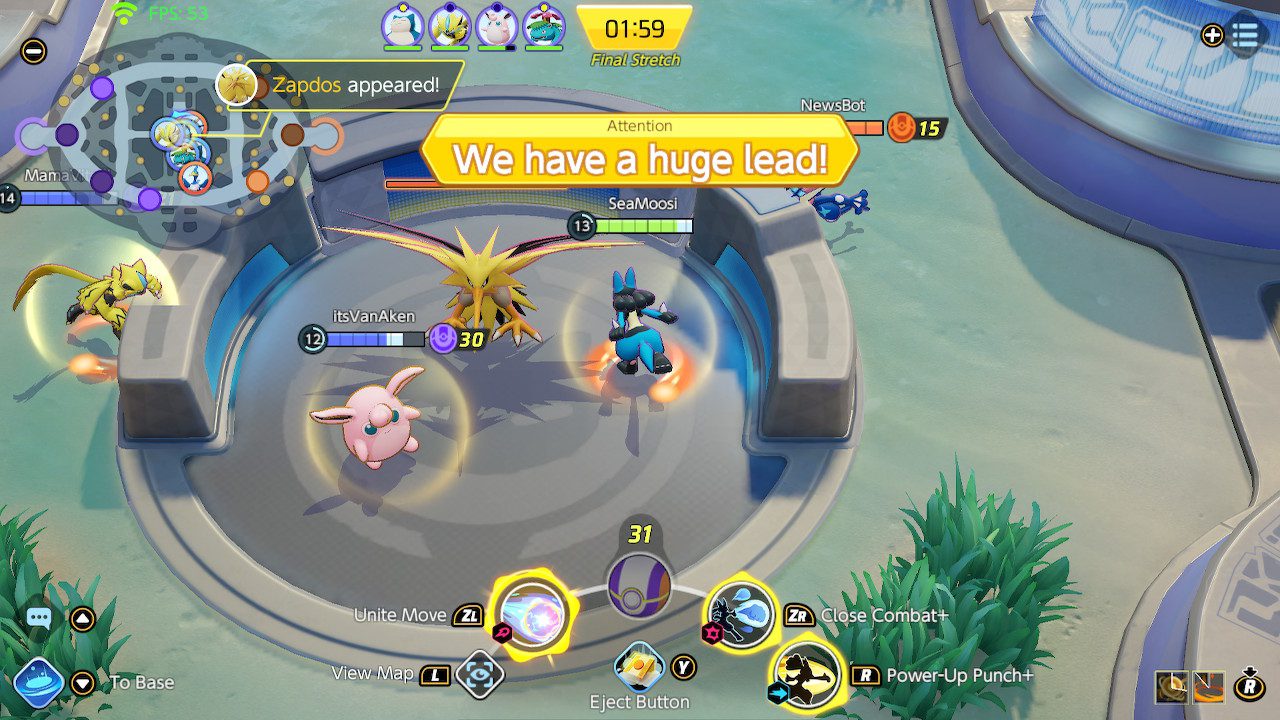 But good lord, the swings are real. They can sometimes feel downright punishing, in how fast they can take a team from behind to ahead. It’s resulted in the last two minutes of most of my Pokemon Unite matches revolving solely around Zapdos.

Every Pokemon Unite match I’ve played out to the two-minute mark ends in a team standoff at the Zapdos pit, as each side cautiously baits and pokes around, or just attempts to quickly kill off the bird before the other team can. The fact that Zapdos goes to whichever side lands the killing blow adds another wrinkle; a team can have full control of Zapdos, but one good Venusaur beam or Lucario Unite move can steal it away.

As Fūnk-é Joseph points out over at Fanbyte, an option to Smite like in League of Legends (an ability that deals a single blast of instant true damage to a targeted unit) might add a bit of timing and tension. Or, if the intent is to treat it more like Roshan, create situations where an alternative to Zapdos can be viable if the team plays it out right.

As it is now, Pokemon Unite seems to center around the big Electric bird. It’s the most critical objective to get, and even if you’re losing heavily, it can be a method for launching your team back into competition, or even the lead. I did recently win a match against a team that took Zapdos, but that was mostly due to a combination of our outer goals still being up—preventing them from consecutively dunking on us—and their Zapdos kill taking long enough that we respawned fast enough to hold a few back.

I’m interested to see what TiMi does with Zapdos as the game goes on, and how team strategies will evolve around it. The Fluffy Tail item provides one interesting option, in being able to do more damage to a wild Pokemon, but I wonder if Pokemon Unite matches will continue to revolve around Zapdos for the foreseeable future.