When multiplayer clicks in the Paldea region, it’s great

While the Pokemon series has had multiplayer since Red and Blue, it’s been mostly just trading and battling. The Let’s Go series might have allowed dual Trainers, but not individual avatars brought in from their own games and worlds.

In Scarlet and Violet, Game Freak opens the doors for players to form groups and explore the open world together. Up to four Trainers can link up using a room code and play in one instance together, via the Poke Portal and Union Circle.

Right off the bat, I’m already iffy on the room code function. While it’s a nice idea to put up a room code and let pals join on you, Pokemon Scarlet and Violet‘s structure is rigid. To group, you need to make the group, and then launch. If anyone drops, you’ll need to remake the room to add them back. And if the host drops, the group goes up in smoke. It’s not a strong start, but it’s something. And once the group gets made, it really is fun seeing everyone’s avatars load in and join your world.

Pokemon, at least for me, can feel like a surprisingly solitary experience. Battling and trading offer outlets, yes, but not the sort of shared social space interactions you can get in other games. I’ve organized a few gimmick events for games like Pokemon Legends: Arceus, and there were good times had by all.

But seeing each others’ avatars in the world and laughing as we all struck poses, twirled, and clambered atop our legendary motorcycle (or leg-cycle) Pokemon was the first moment I thought Game Freak was onto something. Here is the secret sauce. This might be what sets Scarlet and Violet apart. It would be, but in a more roundabout way than you’d think.

Someone’s first inclination, in this kind of environment, would be to test boundaries. So we immediately set off to challenge some of Pokemon Scarlet and Violet‘s story-based challenges.

The sad news is that the dream of watching your friends take on Gym challenges is still just that. We couldn’t find a way to actually see our pals taking on the big Gym fights. And that’s a bit of a bummer! It would’ve been spectacular to see those battles happen in-person, letting you cheer on a pal as they tackle a big challenge and emerge victorious.

Similarly, the Titan Pokemon fights don’t really let you join in either. A good comparison point is Final Fantasy XIV, or really any MMO. When story starts, the user kind of departs to their own little slice of the world. They weren’t removed from the online group, thankfully, but they were separated in a way that split the connectivity. 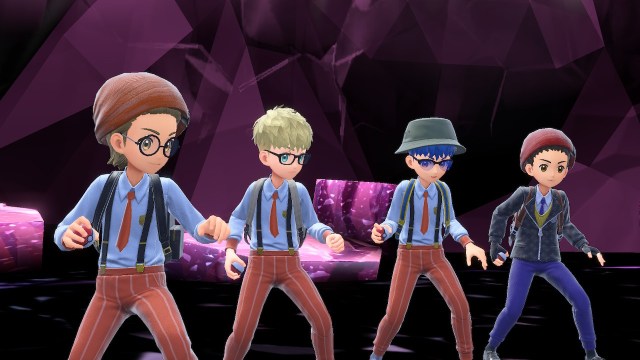 Yes, we could watch each other battle wild Pokemon. Our group could also participate in Tera Raid battles together, which we had a blast doing. Seriously, it’s not just the best way to grind up XP for your party, but the higher-star Tera Raids are really fun to see.

After some time battling and, of course, taking a bunch of selfies, we parted ways. But we didn’t leave the online. We all just slowly trickled off to our own corners, chasing whatever we wanted to do next. And there, somehow, is where Pokemon Scarlet and Violet‘s multiplayer started to shine for me.

On my own, I’m off pursuing a path to a new town. But the whole time in the corner, I’m seeing notifications. Scarlet and Violet lets you know when other players in your instance have done something cool, like catch a Pokemon. I can congratulate them, or ask them where they got it and then find them on the map, to go catch one myself. They’ll be there waiting, ready to guide me right to the spot.

Maybe someone finds a 3-Star Tera Raid and puts out a ping to the group, to see if anyone else wants to join in. Or in some cases, I’d just stumble upon a friend battling a wild Pokemon, and I’d stop and watch for a bit. Cheering and jeering in equal measure, of course.

Then someone finds a weird new sandwich ingredient and declares its picnic time, so we take a moment and head to our secret spot. We set up the picnic table and go into creative mode, dumping the worst ingredients possible. This is not about maximizing stats. This is about making something horrible, and watching as our avatars making mouth motions in front of a JPG of our collaborative monstrosity. 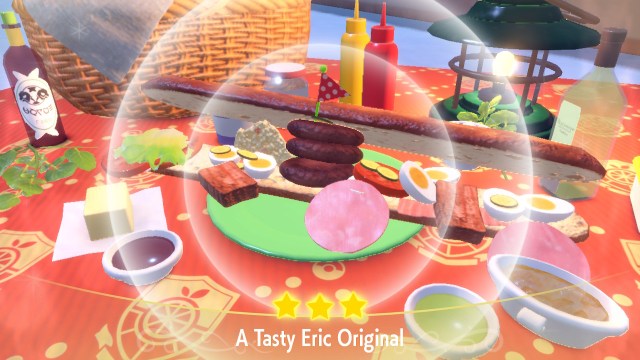 And that’s the weird divide of Pokemon Scarlet and Violet. Its multiplayer can put a strain on the system at times, taking an experience with performance issues to new places. I’d see my Koraidon occasionally turn into an invisible Koraidon, like Wonder Woman’s jet, as I was riding around. Areas that already had some frame troubles, at the very least, did not benefit from having more players around. I had some unexplained communication errors here and there, and exactly one hard crash.

I don’t find myself really caring about the technical issues most of the time, though. Yes, they are stumbling blocks. But there is something about this kind of multiplayer that has really made Pokemon feel new to me in a way it hasn’t been.

The series has dabbled with different multiplayer options, but this is the first time it’s felt so interlinked. It’s not just sending postcards in the form of Pokemon, or some form of combat. Characters are allowed to exist together, alongside their chosen teams. I can see my pals trot out their whole squad for a picnic, and share a laugh at their bizarrely named Pokemon.

That moment, when I was just casually running from one town to another and spotted my pal on the same road, was when it all clicked for me. This, this, was the multiplayer working. We were on opposite corners of the map at various points, playing a solitary game, and then chancing into each other. I’ve had this happen in Final Fantasy XIV and Destiny, but never in Pokemon. In our small, constructed, grouped instance, I caught a glimpse of the same joy MMOs have brought me. It let me group up with pals and make Snake Eater jokes as we climbed an impossibly-tall ladder. 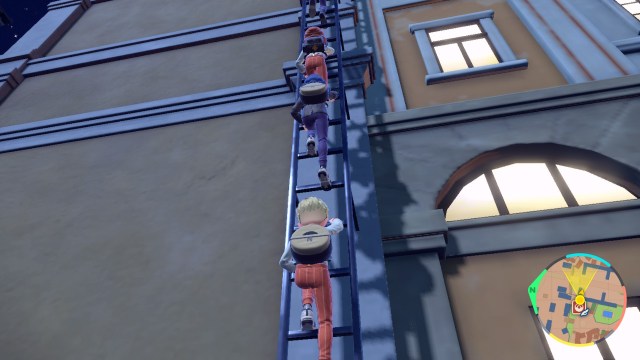 To use a better example: remember that summer we all got really into Pokemon Go? Where you’d run out the front door and down to your neighborhood park, looking for new monsters to catch? Maybe you developed a crew, or had one already. There’s an air of discovery, where you can get together and share info. You caught an Eevee over here, they might still be spawning. Oh, there’s a Gym! Let’s team up and take it for our crew.

Pokemon Scarlet and Violet gives a mainline Pokemon game some of those tools to work with, even if they don’t click together quite so neatly and accommodate anywhere near as many players as Go or an MMO does. This generation uses multiplayer as a forum for more than trading or dueling. And consequently, I feel more connection to Paldea. It has more than just Pokemon battles and Gyms to do, but places to explore. Sights to see. Venues for groups to just co-exist in a virtual social space. It might have some issues and be limited in its player count, but it’s a strong step towards something fascinating. And Arceus knows I’ll be logging back on tonight.