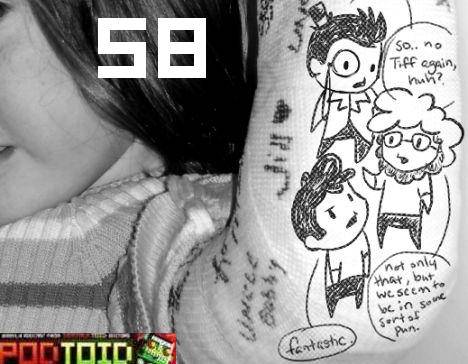 Hey, look! It’s another infuriating goddamned illustration from Ashley Davis! I’m going to kick her in the ovaries.

This week, the (ironically) full, original cast consisting of Tiff Chow, Aaron Linde, and Jim Sterling finally came together to talk about sexism in videogames. Our topics of discussion included:

-A sonnet, a Spore, and an outtake

–Do girls have better things to do than play games?

–Contradictory female strength and sexual portrayal in Metal Gear Solid? It can’t BE!

–Should men and women be portrayed with total equality, or by acknowledging realistic gender weaknesses?

I’m pretty happy with this week’s episode, and I hope you are as well; there’s a pretty good balance of actual discussion and absolutely horrendous, awful imagery (especially during the Games of the Week segment) to make this a pretty standard Podtoid episode.

It was incredibly hard to choose a best question this week, but I’m nonetheless going to go with Scary Womanizing Pig Mask‘s. Send me an email and you’ll get yer $25.

[The song is “Shine,” from the Mirror’s Edge trailer.]