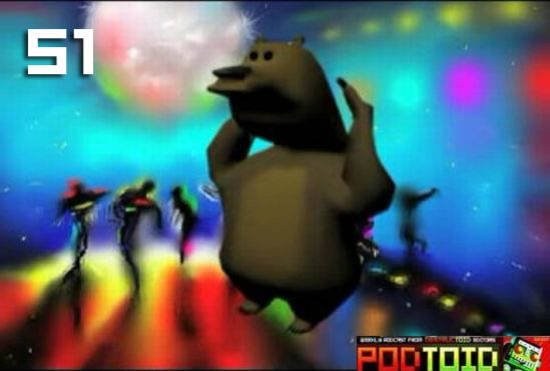 There’s a story behind Colin’s Bear Animation, of course, but it’s just as hilarious without context. Whether you watch the original video, or the nine minute loop, or any of the myriad homages, Colin’s Bear Animation remains the greatest thing to ever grace the Internet — short of this week’s Podtoid, that is.

See that segue? See how smooth that was? Yeeuh.

Check the new show out HERE. This week, the regular Podtoid cast talked about random news stories from the past few months. Topics of discussion included:

– A sonnet and a new contest

So, yeah — there’s a new contest this week, in addition to the regular $25 award for the best comment (which, this week, goes to Phoenix Gamma — put yer email in the comments); hit the jump for the details on the contest, future sonnets, and stuff about Gentleman Dinosaur.

The contest is as follows: make a cblog titled “Podtoid MGS,” then record yourself saying some variant of the phrase, “shut the fuck up, Chad,” as any Metal Gear Solid character(s) you choose.

Don’t be any meaner to Chad than “shut the fuck up,” though — this is meant to be good-natured ribbing with a grin and a hug, not balls-out maliciousness. Whoever does the best/most creative impression will get Metal Gear Solid: The Essential Collection.

DEADLINE IS NEXT WEEK.

As far as sonnets are concerned: from now on I’m going to put potential sonnet themes in the pre-show posts, so if you feel like writing one then we’ll read it on air. As it stands, the next three weeks will be full of Brilliam’s wonderful poems about the Podtoid members — after that, pretty much anything based on our show theme will be up for grabs.

Dinosaur Gentleman: If anyone actually makes a game fitting some or all of the provisions Jim and Aaron describe in the latter half of the podcast, we’ll do something for you. I dunno what, yet, but it’ll be something cool. Maybe you can ask us to do something and we’ll do it, maybe. I dunno. I just want a “shit in a bowler hat then put it on a dinosaur’s head” game mechanic.