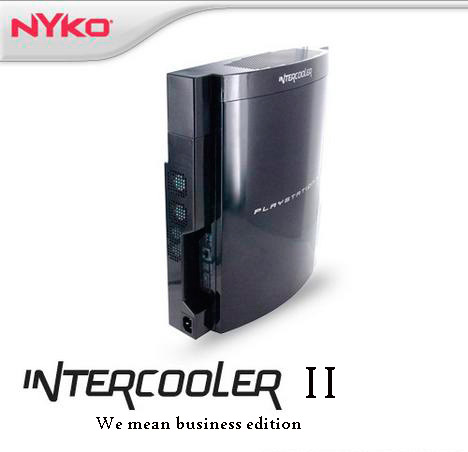 Nyko, the been there done that before company, has proudly released the PlayStation 3’s version of the ever so popular Intercooler. While recently garnering a decent review over at IGN, it’s just a bit concerning that they once again decided that the pass through power connector that melted many an Xbox 360 and voided a few warranties in the process, was the way to go. From their own product page:

Keep your console running at optimal conditions with the Intercooler for PlayStation 3. The Intercooler’s patented technology insure a steady and improved air flow within the console keeping your investment running at cooler temperatures and extending the life of the console.

The Intercooler clips on easily to the back of the console, no tools required. Featuring a pass through power connector the Intercooler is powered by the PS3, and requires no additional wires or batteries. The Intercooler’s compact design allows for vertical or horizontal placement of the PS3 making it ideal for any home theater set-up.

Now I don’t have exact numbers, but I haven’t heard too many people complaining about the PS3 overheating on them (unlike my Xbox 360, which you can cook a three course meal on after a gaming session). Here’s to hoping that whether truly needed or not, Nyko was able to engineer an Intercooler that doesn’t come with nasty side effects this time. If that doesn’t pan out, there’s always Pelican, with a version of their own.

Filed under... #Accessories#Not what I had in mind