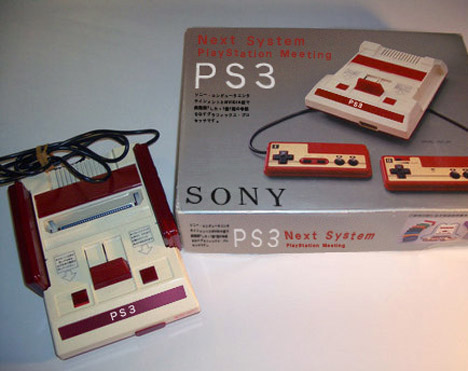 Omigod guys, you’ll never believe what happened. I found a PS3 for ten bucks — that’s right, a PlayStation 3, normally sold for upwards of $500, procured for a single slim Hamilton. It’s weird, though. The discs won’t fit and the component cables I bought, there’s no port for them on the back. Oh god, I’ve been had!

Witness the latest in a series of displays of unparalleled chutzpah: a Famiclone, weakly rebranded as a PS3 — specifically, as a “Next System Playstation Meeting”. As you may have already noticed — get yourself checked out if you haven’t — this particular model looks nothing like a PS3, unlike other efforts to ape next-gen consoles, so if the price didn’t set off sirens in your head, the wired controllers probably did.

Famiclones are a remarkable phenomenon; enigmas hailing from the Far East that now call the dirt malls and swap meets around our country home. This particular model, however, is the first to bank on consumers’ breakneck stupidity to sell the product which, in a postmodern sort of way, is as close to the real PS3 as this little trinket is bound to get.