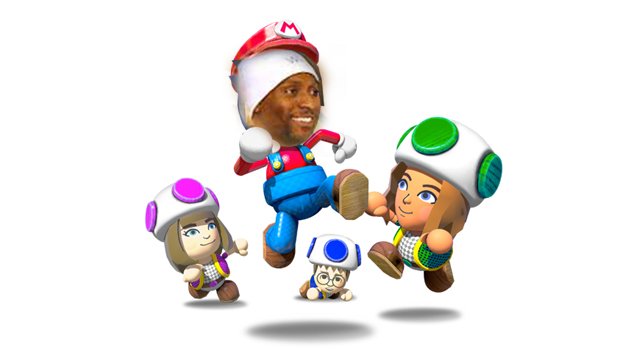 When people think “Nintendo,” a well-spoken and stylish African American man wearing a Powerglove is usually not the first thing that pops into their heads. A man named TriForce is working to change that. He’s a mainstay at Nintendo events, being the first person in the United States to purchase both the Wii and the 3DS. He’s also a fighting game tournament organizer, and a huge fan local competitive gaming in general. It almost feels like Nintendo Land was designed especially for him.

I busted in on his game of Nintendo Land: Mario Chase to get his impressions. Needless to say, he was totally feeling it. As for me, Mario Chase isn’t my favorite Nintendo Land game, but it definitely serves its purpose. A lot of the games in the collection (like Metroid Blast) might be too much for people who don’t regularly play videogames to handle, but literally anyone can pick up and play Mario Chase. Just like when I first played a build of it in 2011, the game is basically Pac-Man Vs. but with a bigger map. Everyone on the planet can play Pac-Man, which is part of why the series used to be bigger than Call of Duty.

As long as you have at least one working finger or thumb, you can play the game. Overall, Nintendo Land doesn’t have the universal accessibility that Wii Sports had, but there are a few games like Mario Chase in there that anyone from 4 to 40 can instantly get into.