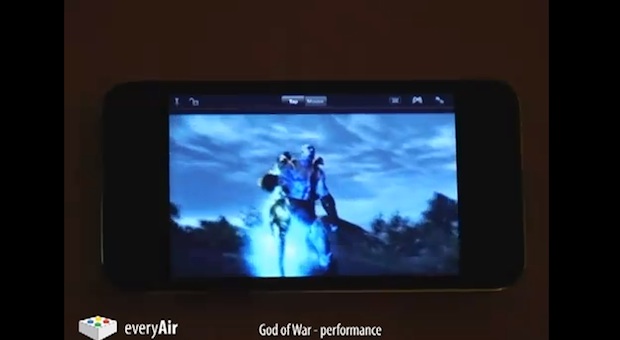 The idea sounds kind of screwy, but when you see it in action it’s actually pretty cool. Pandaelf sent us a video demonstrating how they’ve put together a rig that lets them play PS3 games through an iOS device. Very long story short, video is sent to the PS3 to the iPhone (or iPad, or iPod), and at the same time input commands are sent from the iPhone to the PS3. It requires a video capture device, an input device or two and some software hacking. If it’s all done right, you’ll get to tap on the screen to make Kratos attack, or tap a menu item to start a game.

In the video you’ll see that they get a nice framerate and response time from their rig. These guys even programmed gestures that, when tapped out on the iOS device, emulate button presses. The end of the video has Gran Turismo 5 running on an iPad. Pretty neat, I think.

These guys plan to release a fully customizable version of their software later so that you may also play PS3 games on your iOS device.