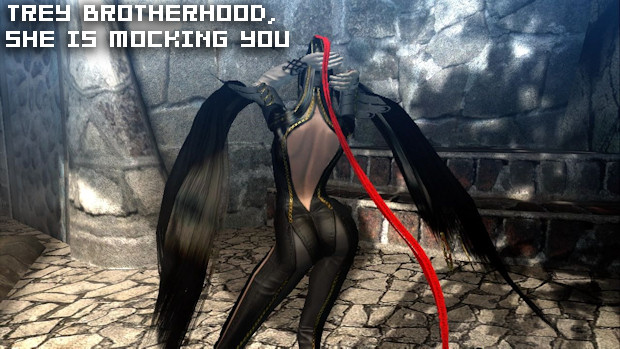 We all know by now that the PlayStation is getting shortchanged with Bayonetta. Firstly, the debut of the PS3 version was embarrassing. Secondly, Platinum Games confirmed it was only developing for 360, with Sega then porting the game over to PS3. Thirdly, the demo was released on both Xbox Live and PSN, with the 360 demo proving to be superior in every way. Unsurprisingly, Platinum Games has been distancing itself from the Blu-ray port entirely.

The Japanese version of the game recognizes that Platinum Games is the developer, but also contains a very clear “Converted by Sega” message. Such disclaimers are unusual to the point of never having really happened before. What’s more, Japanese game magazine Famitsu has published a similar disclaimer, making it very clear that anything found in the PS3 version is the responsibility of Sega and not Platinum.

It looks to me like Platinum wants nothing to do with the Bayonetta PS3, and judging by the bad reputation it’s earned, that’s hardly surprising. Still, it’s simply baffling that the Sony system has been given such shoddy treatment. Quite why the game couldn’t have been developed properly for both games is beyond me.

None of this bodes well for the final PS3 release.