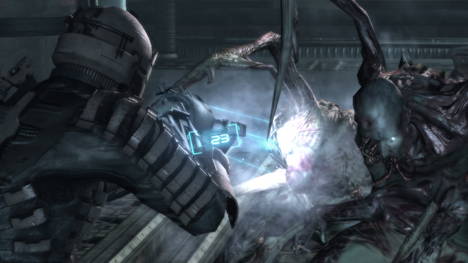 Welcome aboard the Ishimura, a planet-cracking starship that has inadvertently unleashed hell. As you may know by now through the comic, the Ishimura was the final piece of the puzzle that helped release an alien race known as the Necromorphs on the unsuspecting humans.

Well, the Ishimura wasn’t the exact final puzzle piece. No, that honor goes to the humans residing on the colony and the Ishimura. The Necromorphs need human bodies to survive and they have plenty of that to go around now.

The game picks up as Isaac (the main character of Dead Space) and a small team arrive on the Ishimura to find out why there’s been no contact from the ship. The rescue team soon figures out what they’ve gotten themselves into and Isaac, the unsuspecting Engineer, is the crew’s only hope. Hit the jump to find out all about Dead Space. 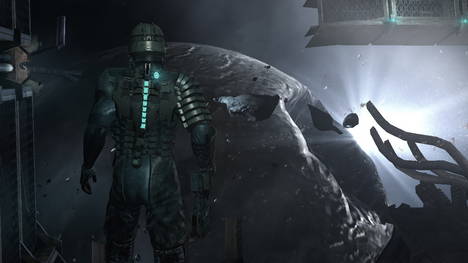 The first thing players will notice when starting up Dead Space is the lack of any HUD on screen. Isaac’s health is represented by a blue light on the back of his suit, which will turn yellow when Isaac’s lost some health and red when he’s very low on health. Everything else that you need to see is shown through holograms. All your weapons will show how much ammo is left on the back of the weapon. The menu displaying your inventory, map and all other important bits will pop out in front of Isaac. You can even turn the camera around to face Isaac and see all the text and such backwards when looking at the menu at this angle. The map of the ship is in full 3D and you can zoom in and out and rotate the map any way you want.

The Ishimura is a gigantic ship and stopping every minute to see where you need to go on the map can get annoying. Thankfully, the future makes everything easier and Isaac has a GPS right in the palm of his hand. Isaac will hold out his hand and a beam of blue light will fall upon the ground, pointing the player to the current objective.

A lot of the style and gameplay will remind you of the Resident Evil series. You can increase your storage space, store your weapons (magical crate style), and upgrade all of the weapons and suit powers for Isaac. He can carry up to four weapons at a time, and he also has some suit powers and a couple of melee attacks. Dead Space is a survival horror game and playing this as an action game will get you killed. Ammo pickups can be far and few between, so you’ll need to plan all of your actions out. 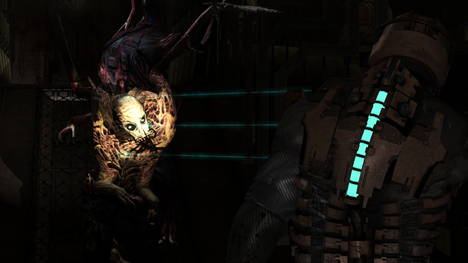 Your suit has the power to put creatures and objects in a stasis field that slows down all of their actions. The Necromorphs typically attack in groups, so you’ll find yourself using the stasis field a lot. Just like the guns, though, you only have the chance to use the stasis field before needing to recharge it.

The suit also has telekinesis powers that let Isaac move objects and throw things around. In the sixth chapter in the game, Isaac goes to the Hydroponics deck, which is being converted by Necromorphs for their own benefits. Scattered throughout the level are Necromorphs that only produce a poisonous gas, which you have to kill. They won’t attack, but once they’re killed, it triggers the game to send out Necromorphs at you. There was a point in the level that I kept getting killed after killing the poison gas Necromorphs. A couple of Necromorphs would enter the room and promptly infected a few corpses in the room to come back to life. I was finally able to pass the room by cheating. Before entering the room, I used my telekinesis to pick up and then throw out all three corpses. After that, the two infector-type Necromorphs were easily taken out.

Throughout the ship, you’ll find rooms where you can upgrade your guns, so long as you’ve found special items called Nodes. When upgrading the guns, players have the choice to focus on rate of fire, clip size, fire power and reload speed. There aren’t that many Nodes in the game, so you have to really plan out what gun needs the upgrades. 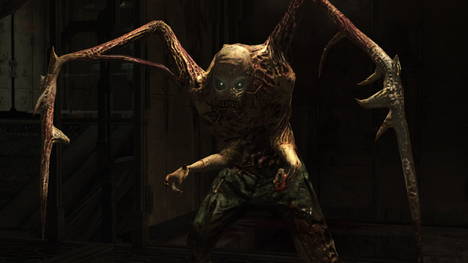 From all that I was able to see during my preview time, I have to say that the creatures are probably my favorite thing about the game. There are a lot of different types of Necromorphs and each type has different ways of being taken out. The Necromorphs can’t simply be taken out if they’re just shot in the head. You have to blow off their limbs in various places to put a stop to them. Necromorphs are determined to get to Isaac, and even missing a leg or an arm won’t stop them.

Necromorphs will also be able to latch onto Isaac and players will need to shake them off through on-screen prompts. Some creatures will be able to instantly kill Isaac as well. Not since the chainsaw guy from Resident Evil 4 have I seen so much gore. Isaac can get ripped apart in so many gory ways. Most of the creatures will drop ammo and money once killed.

Overall, I was very impressed with Dead Space. I had high hopes for the game before playing it and I think this will definitely be a game of the year contender. I can’t remember the last time a game actually made me jump. I don’t get scarred that easily from videogames, so it’s pretty impressive to me that Dead Space was able to make me jump at several places during my preview time.

Look for Dead Space this Octoboer for the PS3, Xbox 360 and PC.