I don’t possess the FPS skills of a Mountain Dew-amped 12-year-old. The things he can do are beyond my understanding. It’s like he’s jacked in to the game’s Matrix. Lines and lines of green code spill down his television screen, giving him the ability to see the all of the battlefield and predict your actions. His ability to crack a skull from across the map (while jumping, no less) and win close-quarters combat with the slightest twist of the analog sticks infuriates me. I want to win. Always.

I’ve reached my ceiling and I’m starting to suck more. Like the aging athlete, I’m looking for an edge. HGH does nothing for the videogame player, but manufacturers are crafting relatable stuff. It’s all about the controller.

When we received the FPS Freek analog nubs from Kontrol Freek, I began hoping that they could give me a simple advantage. I received nothing of the kind. 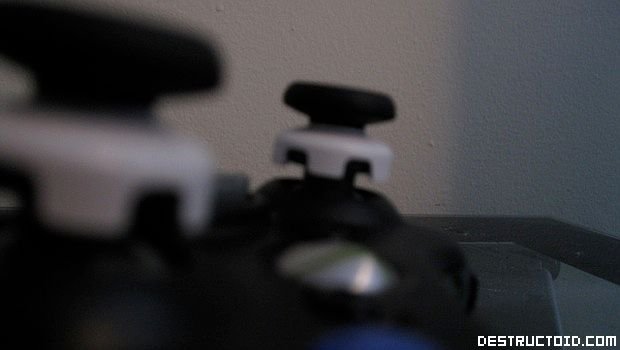 Installation is easy enough. Just snap them over the controller’s existing nubs. The firm white bases are slightly larger than Microsoft’s nubs, making the fit snug. If that wasn’t enough, plastic teeth bolster the connection.

These things don’t look pretty on an Elite Xbox 360 controller. They stick out like a dandelion in a field of red roses. The manufacturer obviously designed this product to be used with the standard controller. The nubs are more tasteful than the stand — they’re a deeper shade of gray. They’re also a few millimeters larger and contain many more bumps to prevent sweaty fingers from slipping.

The point of this device is to give you enhanced fluid control of both axes, and therefore, better accuracy. The bases and nubs transform the standard nubs into towering sticks. Because of the increased length, the sticks become looser and you gain enhanced leverage. Essentially, this is a player-side way of increasing the Y and X axes’ turning speed — something that all FPS veterans seem to do in the game. 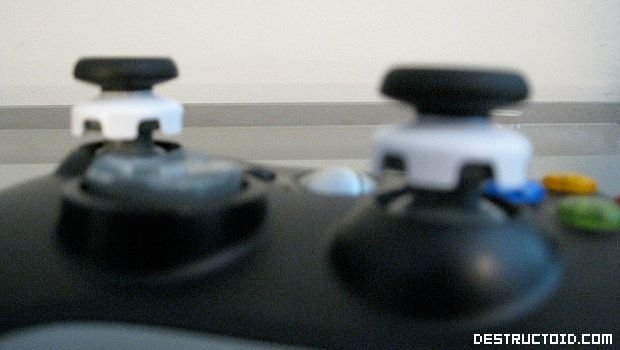 I used these things over the course of fifteen or so days with EA DICE’s downloadable title Battlefield 1943. While the looser rotation is noticeable, I didn’t find myself winning one-on-one battles with ease or experiencing greater success on the digital fields of battle. I think this is attributable to two things: (1) it doesn’t work, and (2) axes can be customized in the game. It’s rare to see a competitive title that forbids stick movement customization; however, I believe that these add-ons are best suited for this kind of restricted environment. Only in this scenario would the looser movement win the day.

But here’s the bigger problem: removing the nubs is a dangerous task. After the fifteen-day period, I removed the nubs to play Madden NFL 10 and broke my controller in the process. The right-hand nub felt fused to the right analog stick; when I pulled forcefully, the joint in the controller cracked and gave in. Fifty bucks down the hole.

I can’t confirm this, but I have a sneaking suspicion that the length boost that the artificial nubs give the controller can put excess force on both analog stick joints. After extended use, a person might end up with my dilemma without even bothering to remove the nubs, which by the way, needs to happen whenever you plan to play a game that isn’t an FPS. The things are reflective of the genre and the specific movements required for it. Games like Madden or Mass Effect become harder to play with these babies attached. 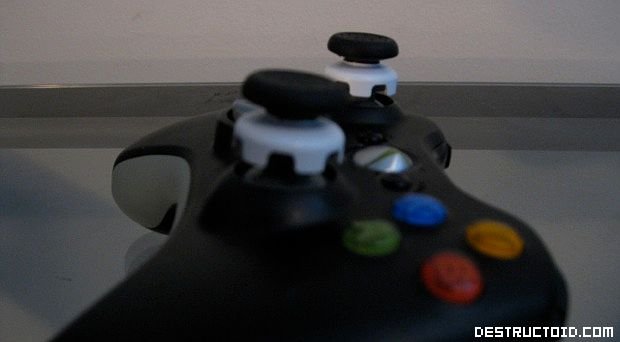 Before I attached the FPS Freek, I believed that the nubs would give me an advantage. Through careful testing, I noticed that it hadn’t. I guess I shouldn’t be surprised, but the real offensive factor here — other than the product not working — is the fact that it can break your expensive Microsoft-certified controllers. Steer away from this and find a way to live with your FPS suckiness. It’ll be alright, man. We all blow at something.