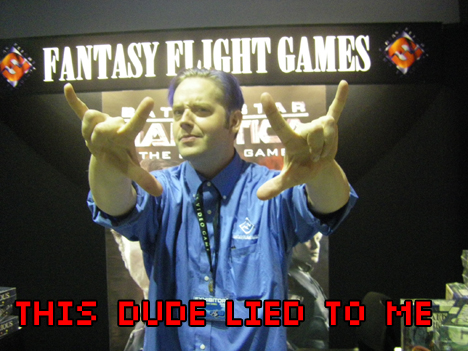 Okay, real quick-like, I’m going to explain that image. This guy told me last PAX that Kingsport Horror (an expansion for my current favorite board game, Arkham Horror) was going to be available by Halloween of 2007. Do not trust this man, as he made me very sad for many months.

PAX isn’t just a videogame show, it’s a celebration of geekdom. All manner of dork pursuits can be found within its hallowed halls, including one of my favorite pasttimes: tabletop gaming.

This year, the show had grown so swollen with content that these original wireless gaming systems had to be moved to their own building across the street from the main convention center. There, tournaments were held in all manner of games and an entire floor was dedicated solely to just grabbing a table and playing whatever you wanted. If you didn’t have your gear with you, a huge library of games was also available for borrowing. There was even a touching tribute to Gary Gygax in which people were asked to leave a note recounting their favorite memories playing Dungeons & Dragons.

The exhibition hall, too, featured many publishers of analog entertainment with lots of opportunities for hands-on demos of new games. Big names like Seattle-based Wizards of the Coast and Fantasy Flight Games were alongside more indie producers like Flying Frog Productions (makers of the very cool Last Night on Earth zombie game).

Check out our epic gallery of tabletop goodness from this year’s show.