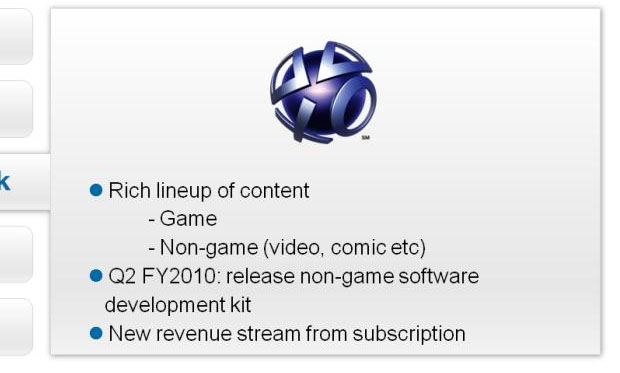 According to Sony, the PS3 will soon generate review from “paid subscriptions” on the PlayStation Network. This news comes courtesy of a recent Media/Investor conference, where a subscription service was revealed during a slide presentation.

The slide outlines the five key advantages of the PlayStation 3 and mentions that the PSN is due to gain a “new revenue stream from subscription.”

Whether this means MMO-style content is coming to the PlayStation Network, or whether it means the PSN itself will soon offer its own “gold” style service, remains unclear. We do know that Sony is working on The Agency for PC and PS3, but that would be revenue gained by Sony as a publisher, and not the PSN itself. It may simply be saying, “Hey publishers, you can make money by putting an MMO on the PS3,” but that would hardly be a “new” revenue stream.

It may very well be benign, but who knows? The wording does not make this a clear-cut case. Either way, we know that more paid content is on the way, so you better just not put your wallet back in your pocket. Ever.