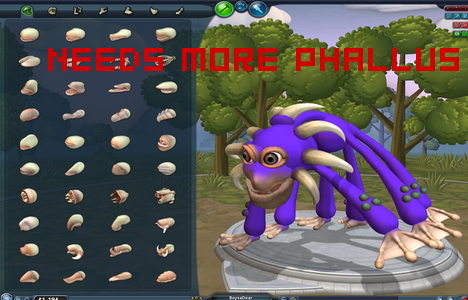 The Spore Creature Creator is a fun tool for the industrious among us. Spawning the unique and customizable little monsters may be a lonely experience at the moment, but no one would know by looking at the numbers. According to the Spore homepage, there have been over 1 million user-created monsters since the launch of the Creator. Interestingly, it looks as though the majority of the million lack the flair of a sexual organ or a resemblance to popular video game characters.

When asked about the benchmark, executive producer Lucy Bradshaw of Maxis had this to say:

Maxis is excited, humbled and inspired by the explosion of creativity that we’ve seen with the Spore Creature Creator online.  I’m amazed at the creations I see getting uploaded to the Sporepedia, whether it’s a realistic looking bird or animal, a 10-eyed alien, or something completely bizarre and unexpected like a creature that looks like a motorcycle, it’s clear that people have an innate desire to be creative, and we’re thrilled to help them express themselves.

Certainly people are jumping behind Spore, but after test-driving the program for a week, do you guys think the well will dry up soon? It is a cold, hard wait for September 5, when you can actually do something with the creatures you create. If the Macintosh requirements were not so insane, I would be in the trenches with the rest of you. In the meanwhile, please tell me what I am missing out on.