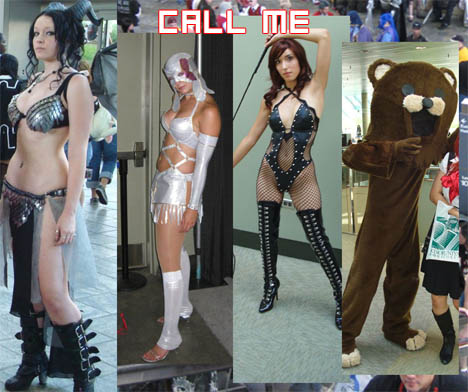 We already told you how Baltimore’s Otakon isn’t your typical anime convention, and how videogaming has a pretty good presence there. This also carries over into the costume play. While we couldn’t give exact numbers, I’d guess that about half of Otakon 2008’s attendees were also cosplaying. Of those cosplayers, I’d say that about half of them were dressed as videogame characters.

We’ve put together a picture gallery, a small sampling of the game cosplayers in attendance this year. Of course, we’ve cut out (most) of the crap for you. Crap, you ask? In one very unfortunate instance, I managed to look up at the wrong time to see an upskirt shot of a grossly overweight Bridget cosplayer. You could say pics or it didn’t happen, but trust me on this one, you don’t want a picture of what I saw.

Highlights include Yoshi being raped, a sad ghost, Jesus, and superheroes posing with beef jerky. Special thanks goes out to Destructoid community member and Japanator reader RHibiki for the photo help.