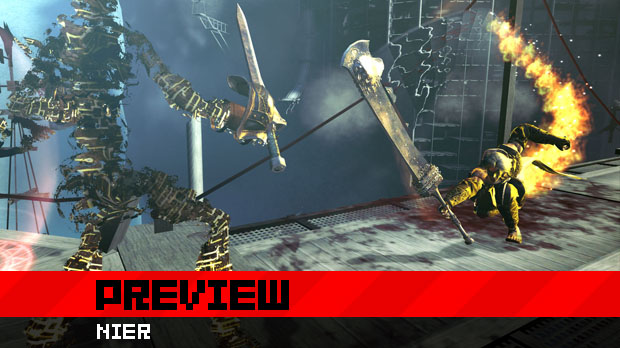 NIER is certainly a misunderstood beast. Between the transgendered support character Kainé who gains an extra set of tools through no fault of her own, the rather odd method of making two different versions of the game to appeal to different cultural groups, and a video in which Kainé orders a floating book to “start f**king helping us!”, NIER is well, different, especially for a Square Enix published game.

Now, NIER could just remain that, a polarizing (and polarized) product for fans of Square Enix titles. Colette found some of these issues with her TGS preview. However, there are some pretty cool ideas going on in this game. There’s an utterly insane story promised, even more than what is typically expected from the land of spiky-haired boys. I was lucky enough to get some clarity on exactly how this game plays in a hands-off demo, as well as gain a little bit more of an understanding of NIER. Come with me as we become nearer to NIER.

Let’s be real, the first and most important part of any Square Enix title has got to be the story, and NIER promises that is spades. For example, the game starts out in Summer 2049. Humanity has been ravaged by a disease, and in the process of trying to fix this disease, scientists have unleashed an even worse disease called the “Black Scrawl”.

Seems most people in this sprawling metropolis have died, and when we meet Nier, he’s hiding behind some book shelves in a shop with his daughter, Yonah, who is currently infected. It’s cold, quiet and snowy, and it is only through a last resort that Nier opens a magic book called the Grimoire Weiss to take on his enemies, the Black Shades, and proceeds to kick their asses with a pipe and some magic. 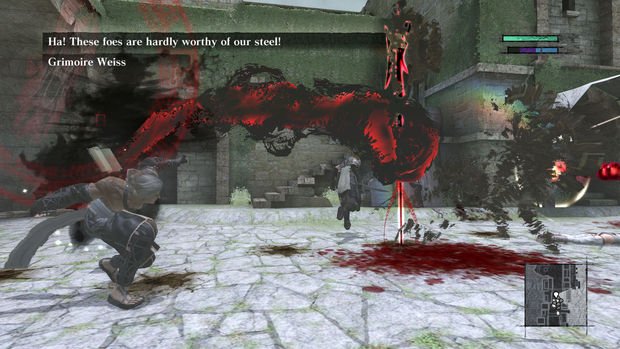 Then the game throws you 1300 years into the future, where everything is now fantasy-based, yet Nier and Yonah are alive in a slightly generic town. She’s still infected, so Nier’s main goal of helping his daughter remains the same. Who knows if the game will spend much time in this time period?

Then, of course, there remains our little futinari friend, Kainé. She is just one of the companions in the game that will assist Nier, and each brings different skills and attacks. When used, I couldn’t tell if she was only around for battle scenes, and I couldn’t tell if you will have any control over her or her actions. One thing is for sure is she has a filthy mouth and says naughty things. Cheeky!

Ultimately, if the plot sounds all sorts of confusing, it is. I’ve been told by representatives that NIER may have the most complex story ever made for a Square Enix game. “Even hermaphrodites may not be as they are seen,” I’ve heard. While I cannot confirm whether or not the game can live up to these claims, you can guarantee that these initial plot elements are going to mean diddly-squat, especially since there is a promised plot twist about halfway through that will change everything. 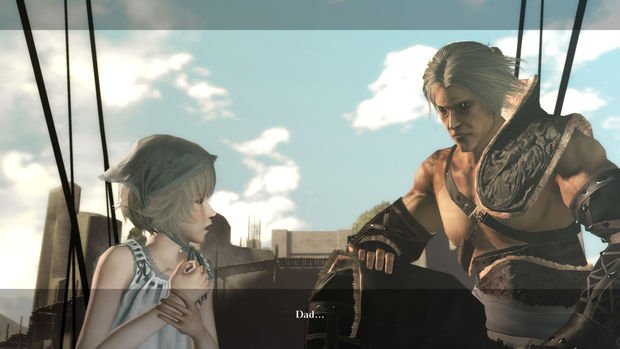 Also, let it be known that the version of NIER that the Western audience will receive is technically the “Xbox 360 only”-in-Japan, NIER Gestalt. This is, of course, different than the Japan-only NIER Replicant, which stars a pretty boy getting saving his sister. Almost everything about the two games is  exactly the same, except we get a burly manly dude.

It’s interesting to see how this pans out for Square Enix and developer cavia, as this might be a good solution to cultural differences. Or it can just be pandering to stereotypes, and it can flop. It’s hard to tell, but this might be the most important thing we gain from NIER.

However, more than just the plot, there is an actual game here. Once in town, Nier is going to be quested with a variety of missions to complete. Just like in an open-world game, each quest has a level recommendation, and many entail running over to an area and killing dudes (or, apparently, sheep). Nier can wield a variety of weapons and armor, all of which have badass names like “Beastbane” and “Lily-leaf sword.” Maybe not that second one, but it is nice to see that each weapon looks and feels different. There are three types in total, with spears, one-handed, and two-handed weapons standing as the trifecta of weapon types. 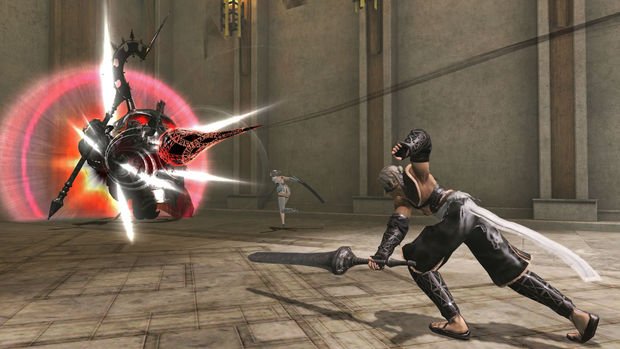 There is also the Grimoire Weiss, a talking book that stays with Nier and is the thematic “glue” that ties everything together. All the menu actions take place in Weiss, and all the spells come from this book. Well, he’s more of a character, considering he can talk, and talk back he does, ordering everybody around him with a bitchy tone of entitlement.

When used in battle, Weiss will hover around Nier and provide magic attacks. Magic like “Dark Blast” (quick fire of blood-red energy balls), “Dark Hand” (a Bayonetta-esque hand punch, “Dark Lance” (considered a Rocket Launcher-type attack), and “Dark Execution” (a summoning of impaling spikes) all round out just a few of the magic abilities. There are a ton, and most of them (if not all) are pretty cool.

Finally, you’ll need to use Weiss to add “words” to your weapons. “Words” are the rune modifiers in NIER, offering the typical changes you might want to make to a weapon. They are pretty silly, being just gibberish like “Paho” and “Otka”, but should fit the bill, I suppose. All the weapons can be upgraded up to 15 times, so a pretty crappy early weapon holds a good chance for becoming a decent blade over time. 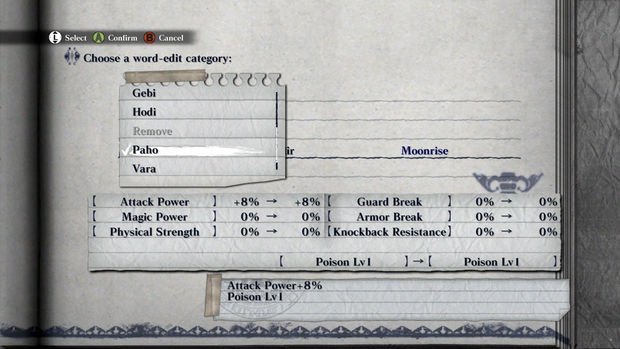 When it comes to the graphics, I’m pretty torn. For one, the game actually doesn’t look awful like the initial screenshots released a few months back would imply. Actually, the characters themselves look pretty good, and the animations are rather fluid. All of the spell attacks have this great blood-red rune feel to them, and while the enemies (other than an epic 400 ft tall boss) were generic shadow things, they are certainly fun to kill.

My biggest problem, however, is that some of the textures in NIER are just awful. The generic fantasy town where the second part of the hands-off demo took place had some of the blandest ground and wall textures, with a swath of green “grass” repeating all over the level. NIER will probably release as a  middle-of-the-road looking game, decent in certain areas and ugly in others.

The music, at least for me, was nicely interesting. The Gothic orchestra and choir certainly fit the feel of the game. Voice acting was fairly impressive, with the actors for Kainé and Grimoire Weiss stealing the show with their cheesy dialog and enthusiasm. This is a game not afraid to drop some f-bombs. Yay! 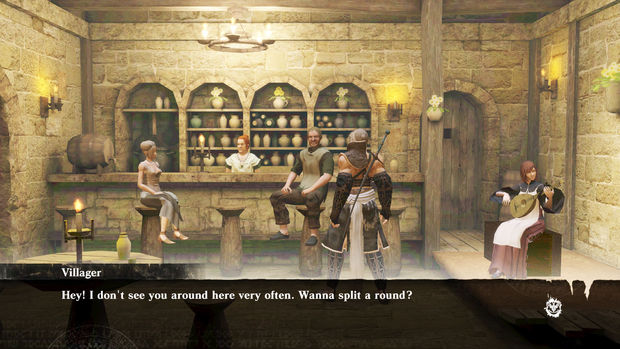 In the end, I actually came away pretty impressed with NIER. While fans of typical Square Enix games might be a little surprised by the nature of the game, as well as the rather fairly mature themes and language involved. The combat at least looks varied and complex, with a lot of magic and attack options, and with the “word” system, there looks to be flexibility of play. The graphics are not the best, but don’t look to detract from the game entirely, and the variety of characters and plot twists promise to keep gamers on their toes. There is a lot more going on in NIER than Square Enix and cavia initially let on, and if the plot can keep things compelling over inane, NIER might be a great game for late this spring.