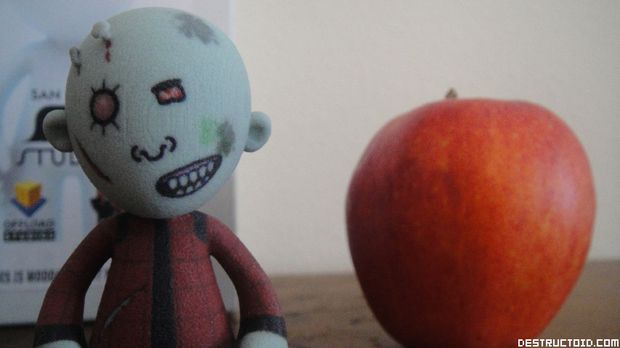 Last week, I took a trip out to Vancouver to visit United Front Games’ studio, and get hands on time with its upcoming PlayStation 3 exclusive, ModNation Racers. While I was there, I used the game’s insanely deep editing tools to design my own racer, a bloody mess of an undead ghoul.

Well, it followed me home. Sort of.

A physical mini-figure of my creation showed up in the mail today, courtesy of Sony, United Front Games, and Offload Studios, a Canadian company that brings virtual characters to “life” in the form of actualized statues. As you can see, the little bugger fits nicely next to my apple and PS3 controller… where it belongs.

The process Offload Studios used to bring is pretty incredible, which you can see in the video after the jump. It’s a bit of an advertisement, but it’s certainly interesting.

ModNation Racers ships next year, and it looks like I’ll be re-creating this dude when I get my hands on it. We have history now.