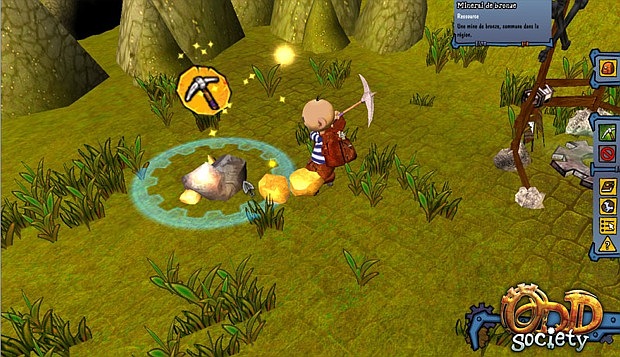 Odd Society is an indie title that flew under our radar. Developed by Odd 1 Incorporated, it’s a simplistic point-and-click title created by a team of 20 or so passionate people. It launched at Gen Con ’09 and was playable on the show floor. I stopped for about forty-five minutes, talked with a few team members, and played a chunk of the game.

Think of a city-builder and shed all of its complexity. Odd Society is a basic builder with little nuance. You control a character named “Odd boy,” who has been charged with creating a thriving home for his once enslaved tribe. Several broken building foundations dot the colorful and small landscape, and you’ll need to collect materials in order to make these structures whole. Little construction signs makes it easy to spot the things that need built.

The building portion of the game is quest-driven. Members of the tribe are scattered throughout the map along with numerous resource-filled reservoirs. Upon speaking to a member, you’re promised an item — which can be used, in turn, to build another building — in exchange for cobbling together his or her building. 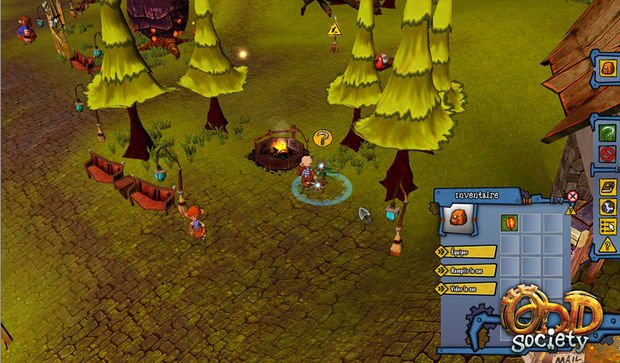 Gathering resources is easy. Just walk up to any flower, tree stump, rock, or whatever in the landscape and use the appropriate tool to break it down. Once collected, you can take it back to the foundation and apply it.

There is combat. As you wander around the environment you’ll be forced to engage vicious slugs, rabid turtles and angry bees with your spear. The baddies are usually hovering around resources. In the demo, I had to fight off several slugs and a few bees in order to get the stone I needed to finish a farm. It was easy enough to dispatch them — just a few clicks on the beasts Diablo-style ended their lives. Interestingly, there isn’t an XP system. Only the weapons given will grant you an edge against the tougher beasts in the environment.

Odd Society isn’t ambitious. It doesn’t try to do anything special that I’m aware of, but I enjoyed its play-as-you-please pacing and the obnoxiously cute and highly stylized art. Don’t expect the complex, this game is the embodiment of chill.

Odd Society launched Thursday, August 13th, for the PC. It’s priced at $9.99. A Macintosh version was playable at the booth, however, the game’s official Web site makes no mention of it.