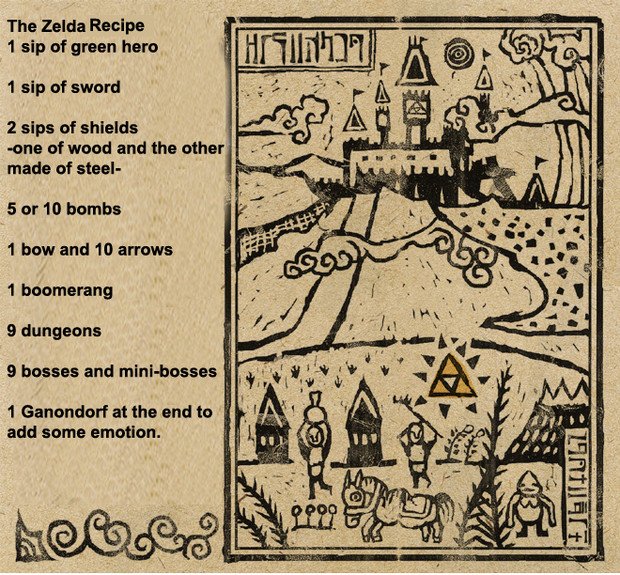 Think for a moment about those “classic things” that make Zelda be what it is. Now see this:

You begin alone and empty handed. The plot goes on, you gain THE green clothes (or start with it), a sword, a shield, some kind of way of transportation and then there’s the dungeons: open chest, find ruppees, find map, find compass, find key, open locked door, solve puzzles, face minions, face mini-boss, gain a cool item, find the big key, open the boss room, face the boss using the new item (he usually can only be beaten by using the item you just gained), increase your health-bar and then go outside the dungeon for more plot and/or mini-quests before doing it all over again (6 to 9 times) until you face the Final Boss (usually Ganondorf ).

Sounds familiar? Sure it does, these are some of the basic elements of any Zelda game, and even the infamous CDi trio has them. But isn’t it almost like a formula or recipe? Aren’t we playing basically the same thing over and over again through the years?

Don’t get me wrong, I love that shit, so much that I’m writing about it and desiring to express my opinion on the matter. The thing is that the “formula” is getting old and I’m one of the veterans that would love to see some twists on it. Not necessarily reinvent the whole thing or throw it away, but at least bring some fresh air to it. The developers already proved they can do it, want to see?

The Goron Mines – Remember that dungeon? It was great! Walking on the walls was a neat twist on the utility of the Iron Boots, but do you remember the big key? it wasn’t the classic big key found on a big chest, instead of the classic one they made you look for 3 Gorons that held minor pieces of the big key.
See that? They used one of the classic elements of the formula but in another context in the game.

Snowpeak Ruins – Another good example of a bit of creativity in the formula. The Snowpeak wasn’t just a dungeon randomly put on the middle of nowhere and built full of traps and puzzles just to keep you entertained. It was a mansion, a Château with people living there (and later Yetis). Even the boss and the boss room weren’t the way you’d expect them to be. The so called “dungeon boss” you were expecting to see was actually right in front of you from the beginning of it, and sitting comfortably on a big chair in front of a fireplace. The “Boss room” wasn’t just a big empty room where the boss waited for you; the room was where the Yeti couple slept after the original owners abandoned the place. What? Abandoned the place? We know that? They could’ve died long ago by some war, or … I don’t know, eaten by Yetis?

For the first time in years, I was wondering about the back-story of a dungeon on the Zelda franchise.

See? The formula can be changed and still feels like a Zelda game.

Another classic element of the recipe is Hyrule currency, our beloved Ruppee. Those colorful little gems have financed our long quests from the very start. One particular thing about them is that they give us just TOO MANY! What am I supposed to do with all that freaking money? We don’t even need it that much. Don’t get me wrong, I love the way we get them by cutting grass, breaking jars, killing enemies and opening chests (they don’t even bother locking those things, what a joy!) but other than buying ammo, potions and some other items there isn’t that much to do with all that money.

Look at the Wind Waker, there was a tomopop oriented NPC that demanded money for models, merchants in boats, Goron traders, a skimo merchant, and Tingle the greediest freak EVER! There was also an auction-house to have fun! Just look at it!


On Twilight Princess they used Ruppees to boost my Magic Armor in place of the mana and that was another neat idea to give Ruppees another function. I’d like to see more use to my Ruppees, more things to buy other than more bombs, more arrows or a red potion I don’t need (fairy in a bottle ftw!).
I remember once playing Pokemon Emerald version for the GBA and there was, in one of the main cities, a Casino to spend the extra money. Mini games where I could spend cash and win prizes! I’d love to see this on a Zelda game, no kidding. Give me a freaking casino and I’ll chase every single chest on that game to spend on it.

I could go on with this and talk about other little things, like the difficulty or the mute hero thing, that bother some of the veterans, but my point is about the game mechanics. The way we do the same thing in almost the same way in every single Zelda game. I’d like to see more Snowpeak dungeons, Beedle’s shops, and a fresh air to a formula we’re all playing since a long time!